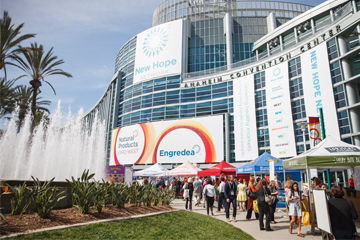 In my previous article about the 2017 Natural Products Expo West, I covered the huge explosion of artisan bone broth makers. Bone broth wasn’t the only real food product at the Expo that filled the booths. Jerky and meat bars is another area with more companies using pastured meats and organic ingredients.

As a kid, I loved eating beef jerky. There was something inexplicably satisfying about eating this hard to chew thin strip of meat. And they had a nice flavor with their spices and seasonings. But the ones I ate were terribly unhealthy. Along with using factory farmed meat, the conventional jerky’s were filled with rancid oils, sugars, and GMO ingredients. With all the grass fed options out there now, it’s a treat that I can eat beef jerky again.

In alphabetical order are the companies I liked. 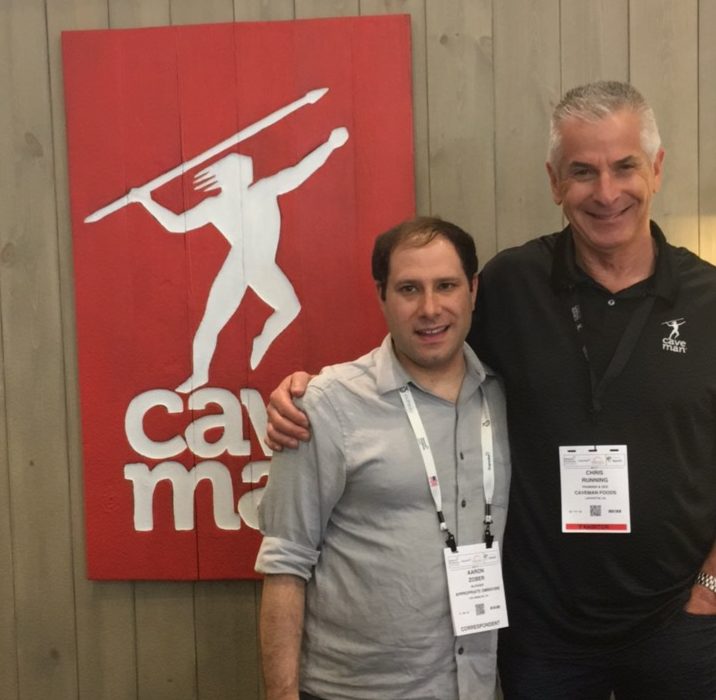 Typically the jerky and meat bars focus on meat as opposed to poultry. And the companies that do chicken or turkey jerky usually only have one flavor. But with Caveman Foods, the bird’s the word with their various chicken jerky options.

Another jerky that I discovered at this year’s Expo was Country Archer. They go for the more traditional beef and turkey jerky’s, but with a spicier angle. Some of their flavors are sriracha, sweet jalapeno, and mango habanero. 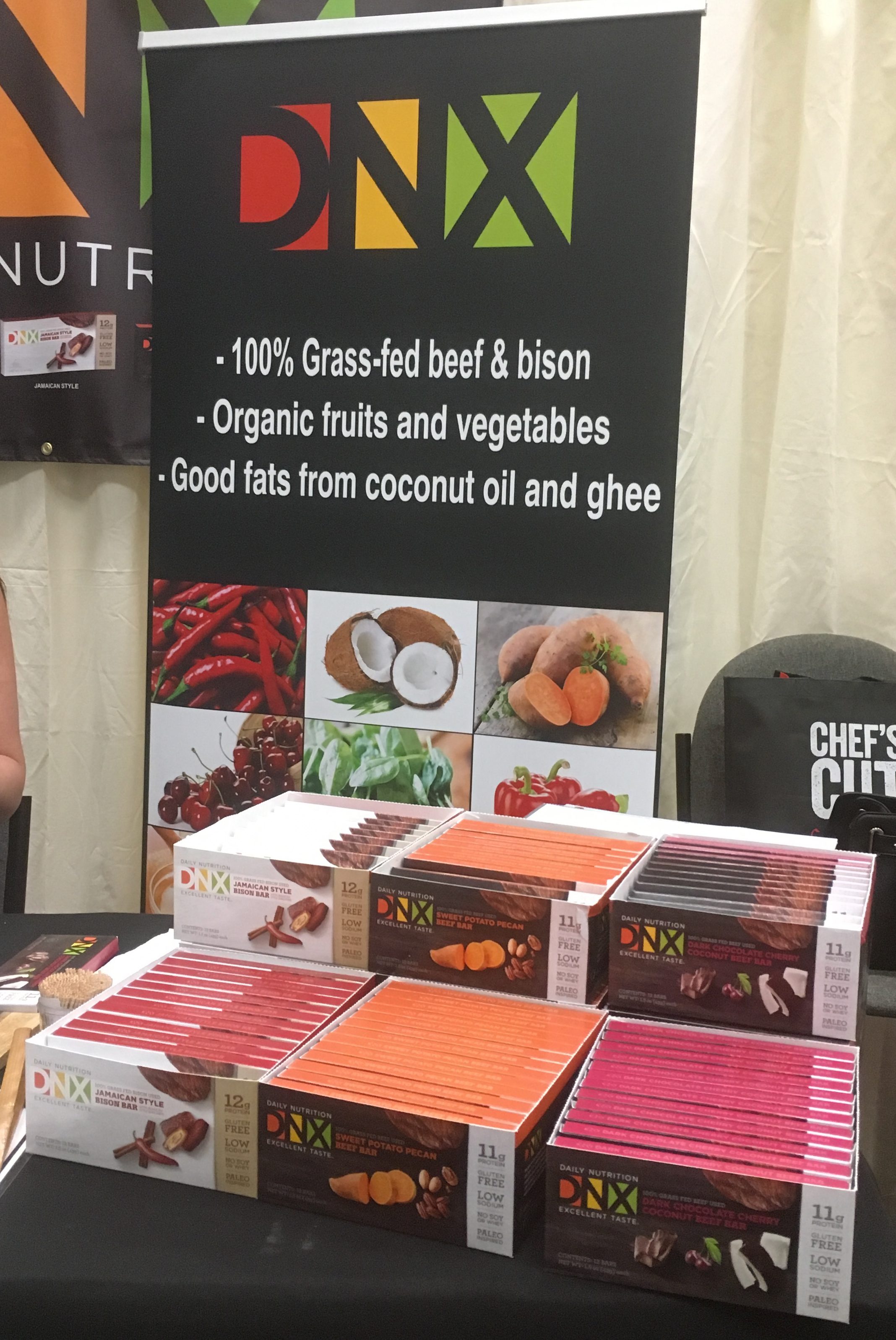 Along with jerky, grass fed beef bars are also popping up all over the place. Beef bars are softer and often mix in fruits, vegetables, and nuts. Some of the foods that DNX mixes in with its grass fed beef are sweet potatoes, coconut, and chocolate in its different varieties.

Epic started out with its grass fed beef bars. They’ve expanded into a number of other areas over the years, including broth and animal fats. They’re now offering snack strips and bites, which are more similar to jerky.

Living in Los Angeles, I’ve been familiar for quite some time now with the Santa Monica based Lawless Jerky. Founder Matt Tolnick left the law practice to make grass fed beef jerky, but incorporated his legal background into the company’s catchy name and clever logo. 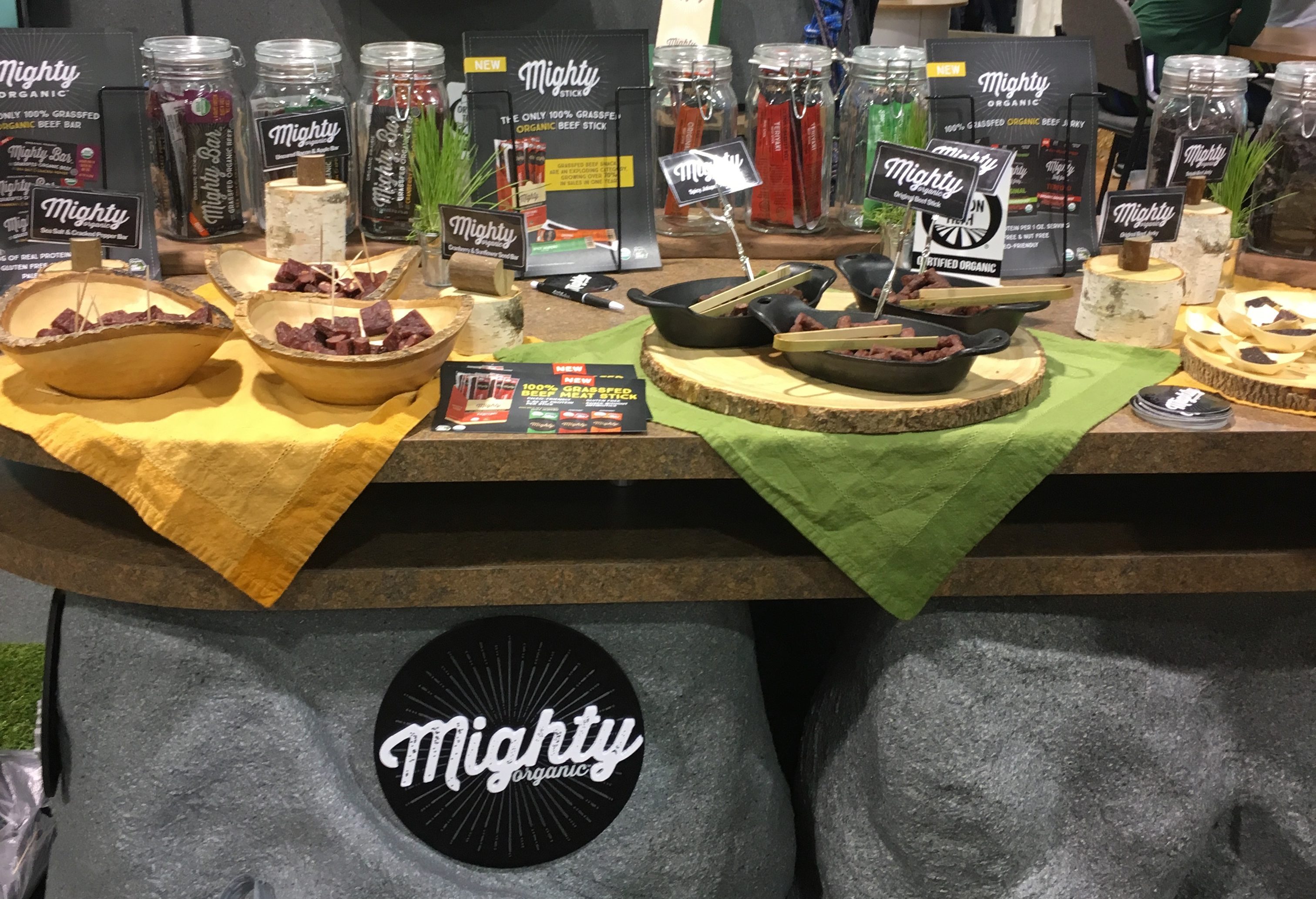 Organic Valley is a major player in the real food world that has been operating for almost 30 years. They’re a co-op of small sustainable farms all operating under one name. They’re known mostly for dairy, but also have an Organic Prairie line that sells pastured meats. A little over year ago, they launched their beef bar called the Mighty Bar. At the Expo, they announce their Mighty brand will soon include beef jerky. 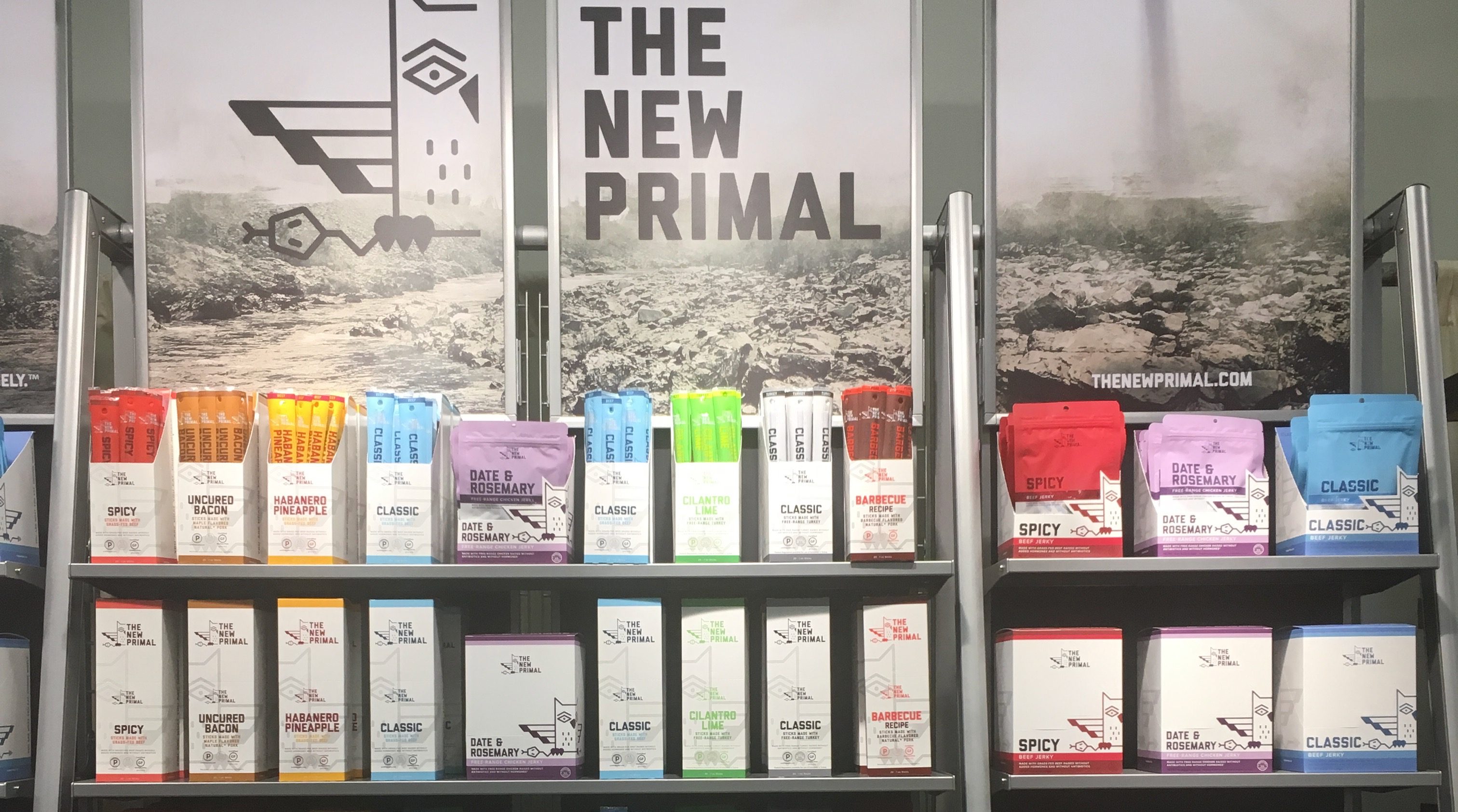 The New Primal has been one of my favorite go-to’s at the Expo West for the past severals years. They began as beef jerky makers and now make sticks, which remind many of Slim Jims. But unlike Slim Jims, The New Primal meat sticks are healthy and sustainable. They also launched Snack Mates, which are mini versions of their beef sticks in kid-sized portions. 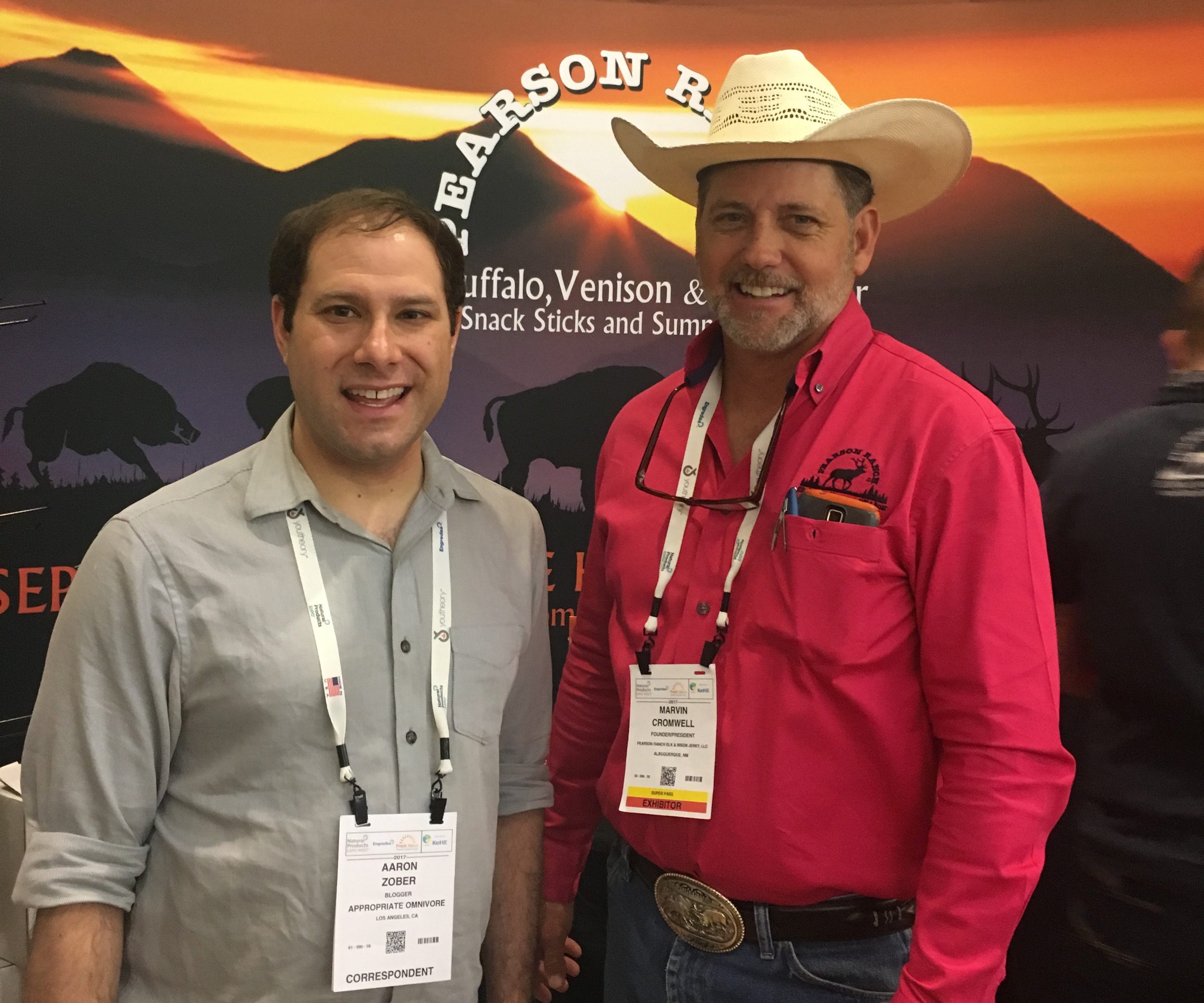 When I started eating pastured meats, I also began eating more gamy animals. I was delighted to learn about Pearson Ranch Jerky. They have jerky, sticks, and sausages from their family owned farm of elk, buffalo, venison, and wild boar. The farm has been around since 1959, but it wasn’t until 2011 that meat snacks became their main area.

Slant Shack began in 2009 with a recent college graduate and his friends living in a “slant shack” and having a dream making a more sustainable and healthy beef jerky. They followed with quick success, giving us tasty beef jerky in colorful packages. They also have a great sense of humor with their name and as demonstrated in the photo above. 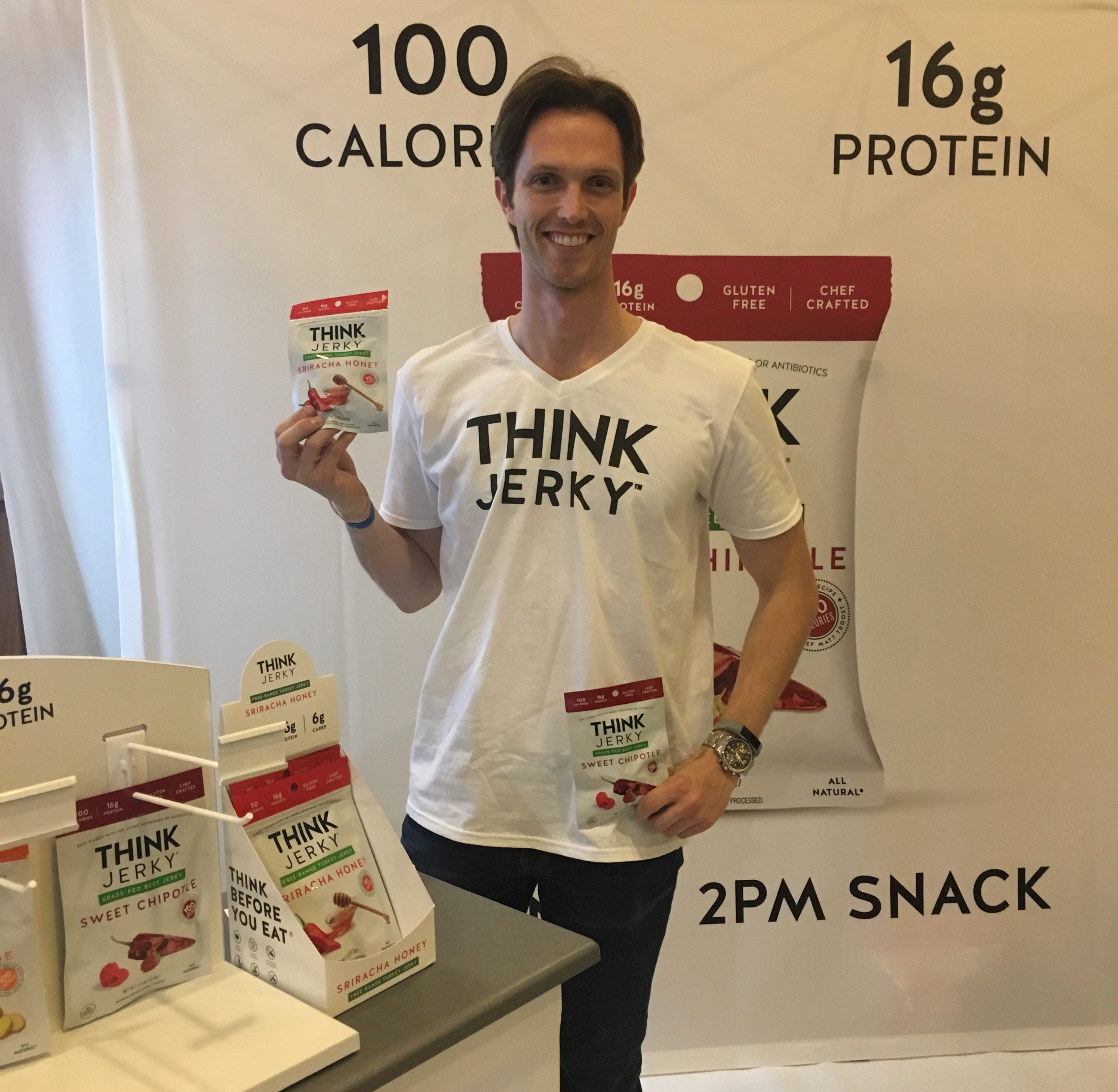 Think Jerky is a jerky company in which all of its flavors are created by award winning chefs. The current chefs to have created their jerky are Doug Sohn, Gale Gand, Laurent Gras, and Matt Troost. 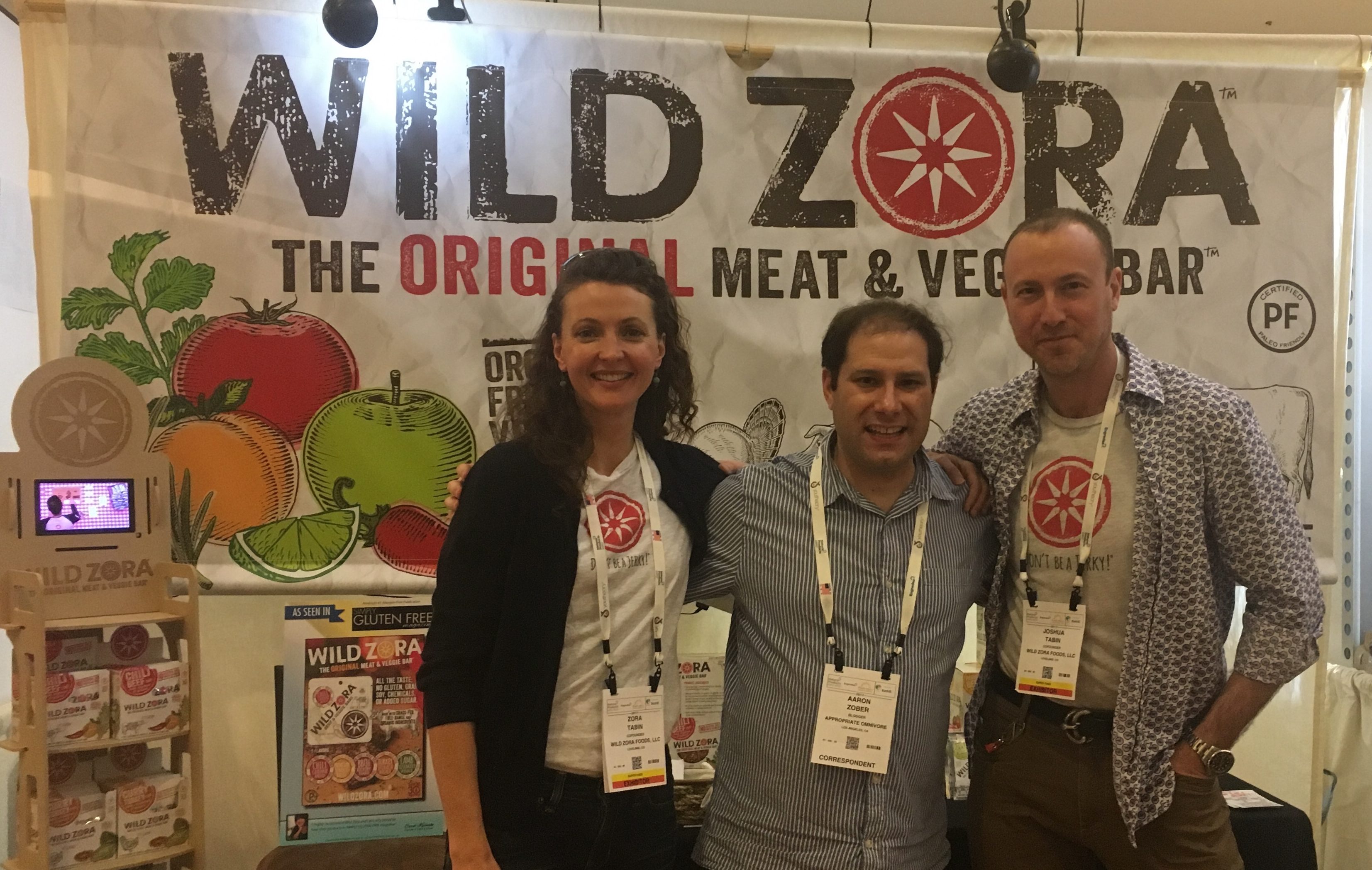 Wild Zora is another company making bars of meat and vegetables, which founder Zora calls “a complete meal”. The vegetables they use for the different assortments, include kale, tomato, and spinach. And instead of using any sugars, Wild Zora adds fruits such as apricots and dates to give a little sweetness to their products.