My final day of the Wise Traditions 2012 Conference was on Sunday.  The presentations on that day differed from the ones and Friday and Saturday.  There was no farming tracking and instead there were two very different tracks that weren’t offered the previous days.  One on native ways and the other on entrepreneurship.  I attended one of each.

First, I went to a panel called “Tending the Wild” under the Native Ways track.  The first part of the presentation was separate talks by M. Kat Anderson, an ethnoecologist at UC Davis, and Jennifer House, an apple farmer in Northern California.  They talked about the California Indian tribes and what we can learn from the way they harvested plants, raised animals, and cared for our ecosystems.  They also spoke about and displayed photos of the beautiful and scenic California landscapes. 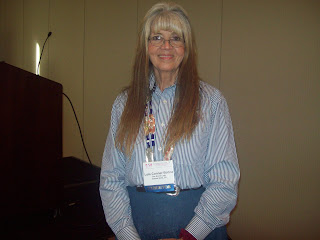 The final part of the “Tending the Wild” panel was by Lois Connor, a basket weaver, from the North Fork Mono/Chuckchani tribes.  Lois explained the time that went into making the baskets and how they were of great use for the foods the tribes prepared. 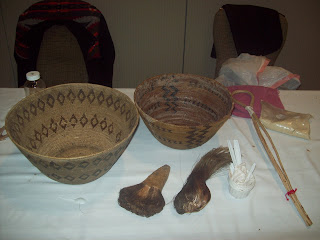 On the table are baskets and other tools used by the Indian tribes.  In the basket on the right, an acorn pudding was mixed and served to the people attending the presentation.  Leave it to the Weston A. Price Foundation to give me the opportunity to taste acorns.  I was pleasantly surprised at how nourishing they were. 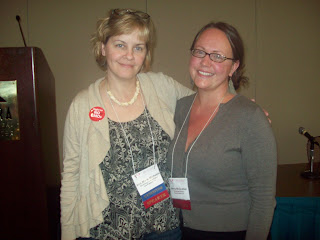 The last panel that I attended at the conference was part of the Wise Entrepreneurs track and was about marketing with Facebook and social media.  Having a blog and Internet radio show, this presentation was of great interest to me.  The panel consisted of Village Green Network founder Ann Marie Michaels (pictured above, left), Nourished Kitchen blogger Jennifer McGruther (pictured above, right), Cultures for Health‘s Julie Feickert, and acupuncturist/integrative medicine practitioner Chris Kresser.
This presentation also had a special meaning for me, because Ann Marie was how I was introduced to the Weston A. Price Foundation roughly a year ago.  At the Los Angeles Green Festival in 2011, I stopped by the Weston Price booth and Ann Marie was the first person I spoke to.  I was greatly intrigued with what the WAPF was about.  I had been eating a mostly natural and organic diet, but felt like something was missing in my quest for real food.  The dietary guidelines of the WAPF felt like what I needed to make it complete.  I spoke with Ann Marie for a long time and then spoke with the 3 other members at the Green Festival WAPF booth for great length.
I see Ann Marie’s Cheeseslave blog as an excellent model for reporting on real food.  In fact, these articles with photos from the Wise Traditions Conference were partly inspired by her postings on the Natural Products ExpoWest earlier this year.  So as you can see, I was very eager to hear what Ann Marie and her team had to say about how to be a successful blogger in the real food world.
Ann Marie and the rest of the panel gave invaluable advice about how to generate traffic with your blog.  Among the things she spoke about were the limitations Facebook has with people being unable to see all your posts, the bright future of Google Plus, and the importance of registering with as many different social media sites to get the domains on there before someone else does.