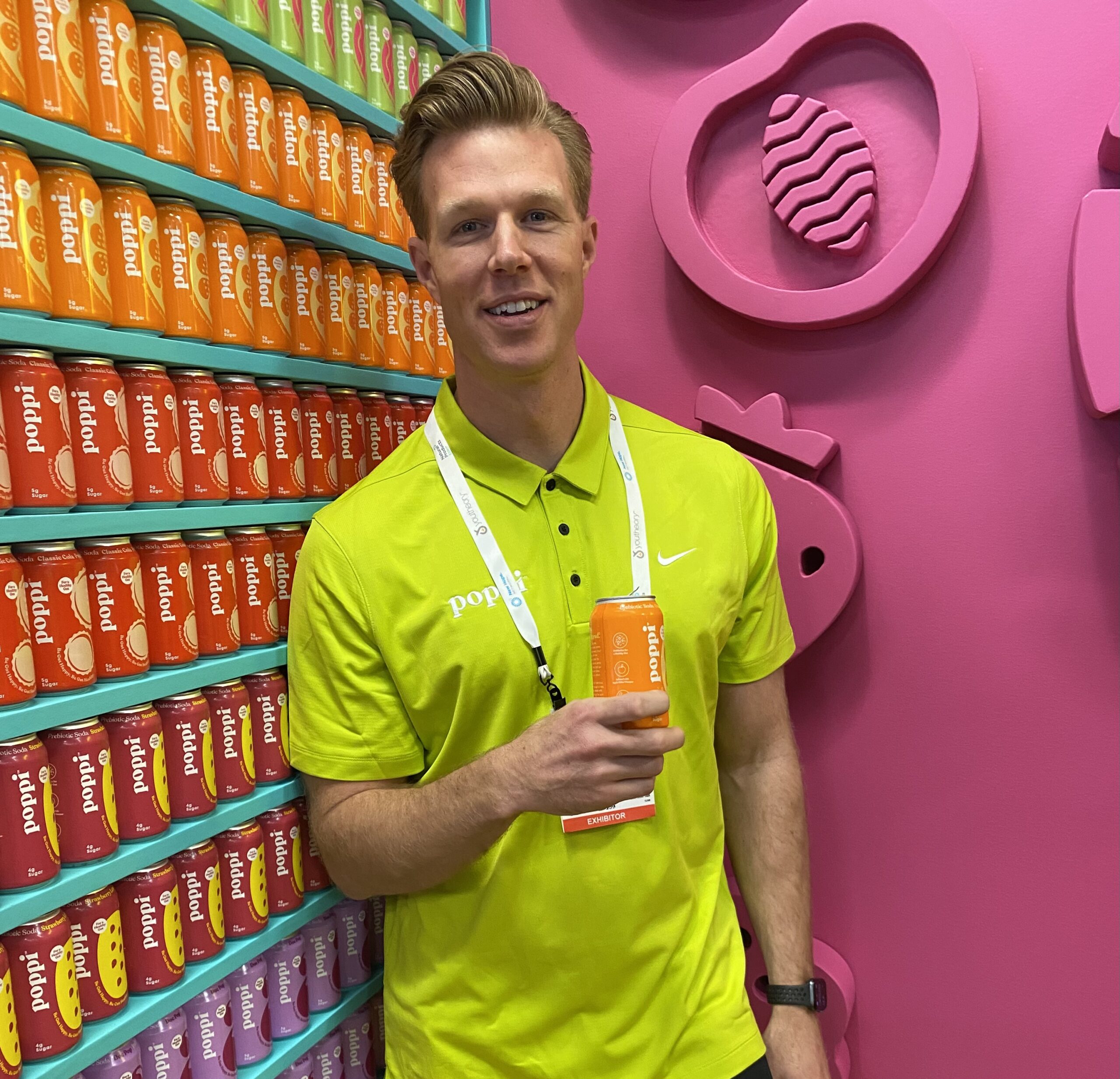 We’re now half-way into July and soon to approach the hottest day of the year. As we deal with this extremely hot weather, we all want to reach for a nice cold beverage to cool down. After water, soda (or pop, as I called it growing up in the midwest) is the most popular drink in the United States. Conventional soda pop is also one of the unhealthiest drinks. It’s loaded with sugars. And high fructose corn syrup at that. Additionally, conventional pops lack any nutritional value.  Fortunately, one of the fastest growing subcategories of natural products and natural beverages is prebiotic and probiotic soda pops. These products were founded by people who loved a good soft drink, but wanted something healthier.

As both prebiotics and probiotics are used by different companies to make these healthy and functional soda pops, the question arises as to what’s the difference between prebiotics and probiotics. Here it is. Prebiotics are plant fiber which feed your good bacteria. Probiotics are living bacteria which add on to the amount of good bacteria in your digestive system. Both are beneficial and necessary to maintain good digestion. The functional soda pop manufacturers have many different reasons for why they chose to go with prebiotics or probiotics.

Along with prebiotics and probiotics, a number of other functional ingredients are used from kombucha cultures to apple cider vinegar to ginger. Many of these sodas use cane sugar while some use only natural sweeteners such as stevia, monkfruit, or fruit juice. The people who founded these businesses are also very diverse. Some came from the kombucha industry and wanted to delve into different kinds of natural beverages. Others who created these healthier pops include a gastroenterologist and a founder of a non-profit to end trafficking.

Here are the best prebiotic and probiotic soda pops: 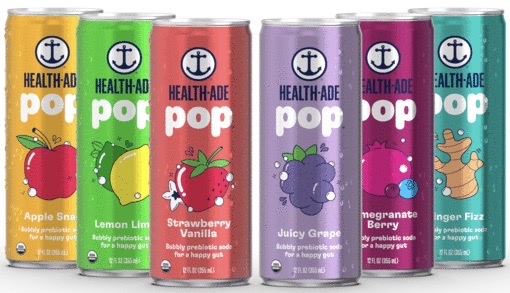 Daina Trout founded Health-Ade in 2012 with her husband Justin Trout and best friend Vanessa Dew. Daina learned how to make kombucha while earning her masters in nutrition and public health at Tufts University. The trio began selling their kombucha at farmers markets in Los Angeles and soon Health-Ade became the fastest selling kombucha in the country. Daina’s goal had always been to brew the best tasting and highest quality kombucha on the market. More recently, Health-Ade expanded its line to  probiotic mixers and the prebiotic drink Health-Ade Pop. They decided to go with prebiotics for their Pop label since both probiotics and prebiotics are important to include in your gut and they had probiotics in their kombucha. The Health-Ade Pop flavors mostly incorporate fruits such as lemon lime and pomegranate berry, but mix in other ingredients in some of the pops such as strawberry vanilla and ginger fizz. 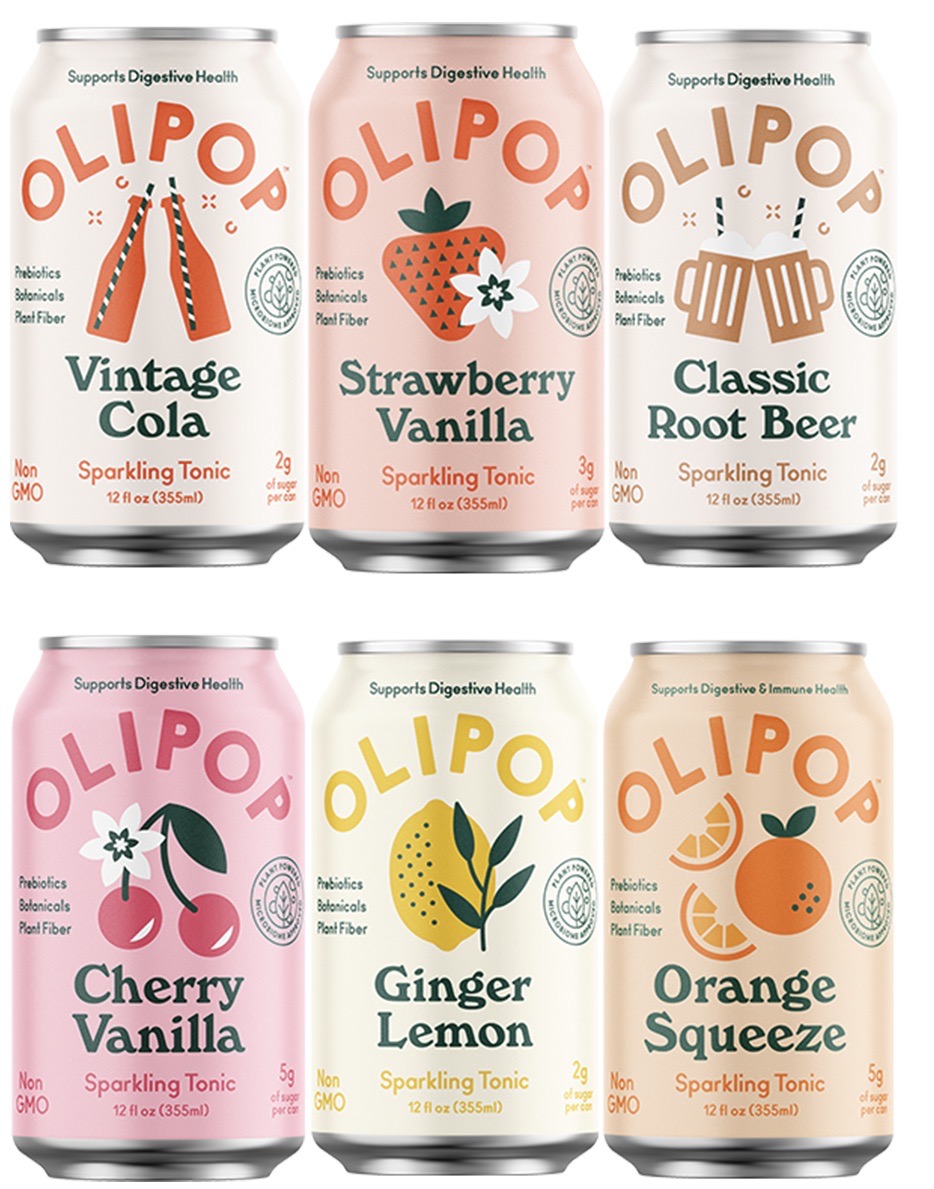 For over a decade, Ben Goodwin and David Lester both shared the vision of a healthier and tastier future. So they set out on a odyssey to make a product which would change how people felt about soda pop. This journey led them to forming Olipop. Their idea was a thoughtfully crafted tonic which relied on wholesome hardworking ingredients for its taste as opposed to loads of sugar. In order to accomplish the product they had in mind, they put together a global team of pioneers in the field of gut microbiome research. Ben and David were specifically looking for researchers with knowledge in digestive health, prebiotic structures, model gut systems, and gut microbiome-supportive nutritional strategies. Some of the Olipop flavors include traditional styles of soda pop, such as cola and root beer, while others contain fruits mixed with various ingredients, such as cherry vanilla and ginger lemon. 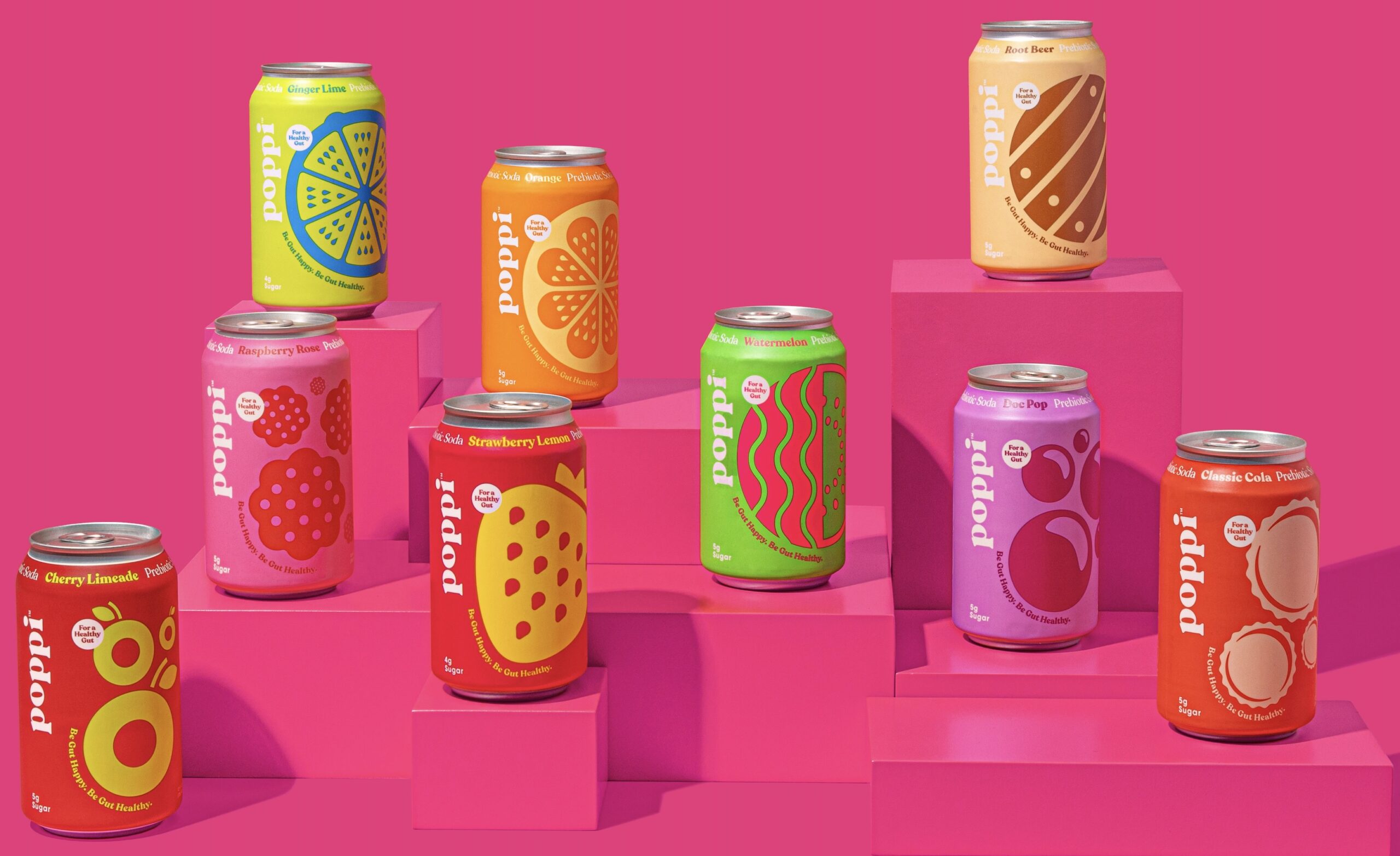 Poppi began with co-founder Allison Ellsworth learning about apple cider vinegar in hopes that it could cure her chronic health issues. She and her husband Stephen decided to experiment in their kitchen by mixing fresh fruit juice with apple cider vinegar. After drinking ACV every day for a week, her symptoms were gone. Seeing that it worked for her, she felt others would be interested in this breakthru beverage. So the two began bottling up the drinks and offering them at Dallas farmers markets. They developed a loyal following with the beverages quickly selling out every weekend. Next they received an investment on Shark Tank and rebranded to the name Poppi to sell their soda pop. Alison and Stephen use prebiotics in the ingredients as they’re more shelf stable than probiotics. Poppi has a wide variety of options from numerous fruits and fruit combination to their versions of soda pop, which are cola, root beer, and Dr. Pepper. 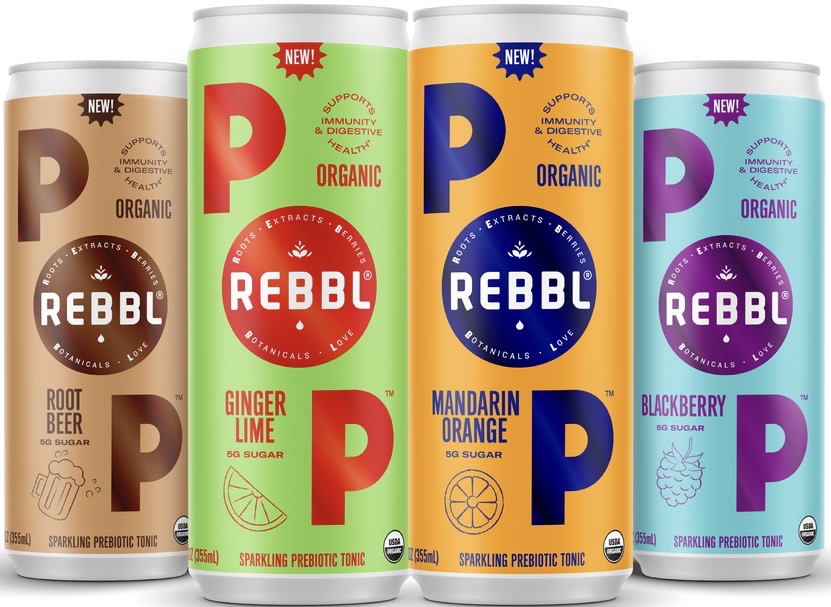 Before Dave Batstone co-founded REBBL, he founded the non-profit organization Not for Sale. While being part of this non-profit, Dave met with thought leaders from around the world to develop a sustainable business solution for the human trafficking in Peru. From this gathering, came the idea of producing a beverage with native ingredients from economically deprived regions. Dave and the other leaders felt by providing these communities with new opportunities to contribute positively to the global economy, they would also reduce the risk of trafficking and exploitation. Dave then set out to find somebody with passion and experience in natural products to help this concept come to life. This such person was Palo Hawken, who loved herbalism and botanical beverage and co-founded REBBL. REBBL stands for roots, extracts, botanicals, and love. The company could also be described as a REBBL with a cause. Their first product was elixirs where 2.5% of the net sales from every bottle were donated to Not for Sale. Since then, REBBL has ventured into cold brew coffee and prebiotic pop. They went with a prebiotic pop as they found the formula easier to develop than a probiotic one. The majority of REBBL’s pops are fruit flavors, but they also have a root beer.

Turveda co-founder Dev Chakrabarty was always slightly addicted to the conventional soda pop. As he grew older, he started taking functional shots. Then one day Dev was drinking a Dr. Pepper in his grad school class and an idea came to him. He realized it was time to reinvent the conventional unhealthy soda pop and make it better for your gut and brain by using real plants and spices. So Dev teamed up with his gastroenterologist father Dr. Milan S. Chakrabarty, M.D. to create a soda using ingredients which are scientifically proven to improve digestive health and boost immunity. The Chakrabarty’s referred to this as Super Soda. Super Soda combines superfoods and soda pop to provide about 20% of your daily fiber and all the benefits found in a wellness shot, instead of large amounts of soda and citric acid. The functional ingredients added to the fruits in the beverages come from the founders’ Indian culture and consist of spices such as turmeric, cinnamon, and ginger. Dev and Milan went with prebiotics because some heat is applied to the spices they add and probiotics would be destroyed by the heat. 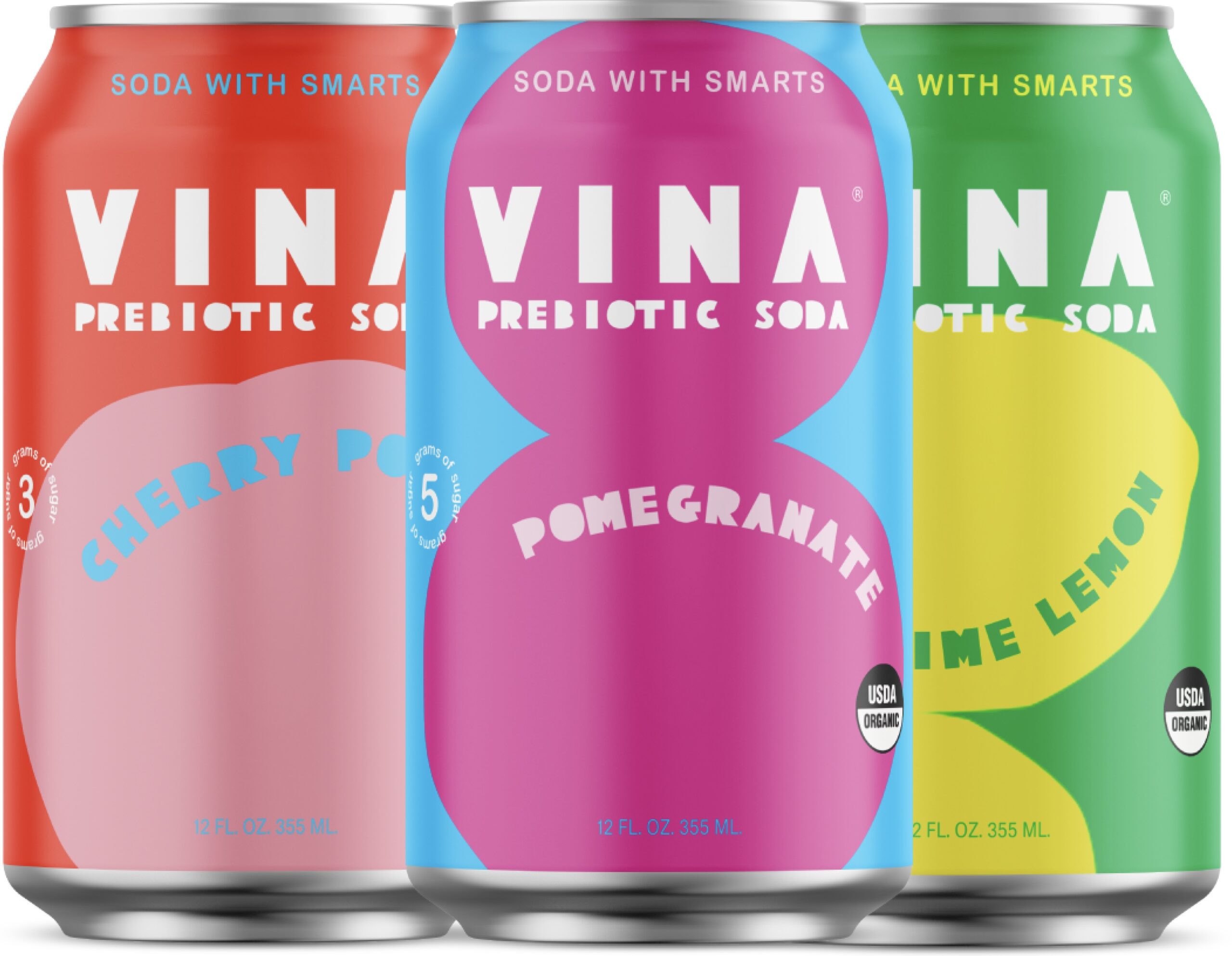 Ten years ago, Vina founder Alex Matthews was into juicing before it had caught on with the mainstream. While he was sipping liquified leafy greens at a hippie juice bar, he then realized he wasn’t the only one. So Alex opened Juice Served Here in Los Angeles in 2012. Next he started a creative studio known as Here Studio, an all day cafe called Highly Likely, and a tepache brand named De La Calle. And then most recently Alex launched Vina, which he refers to as a soda with smarts. By Smarts, Alex is referring to the fiber, minerals, and apple cider vinegar he includes with every beverage to give them both functionality and flavors. As probiotics have a flavor of their own, Vina uses prebiotics because they don’t have any flavor. So consumers can focus on the ingredients themselves in the Vina drinks, which consist of a number of different fruits plus a ginger flavored one.

Having worked in the kombucha world, Culture Pop Soda founder Tom First set out to reinvent carbonated drinks by concocting a soda with probiotics along with other functional ingredients and a small amount of sweetness. Their beverages contain organic fruit juices, ground organic herbs & spices, and live probiotics consisting of billions of bacterial cells. The sweetness comes exclusively from the organic fruit juices. No artificial sweeteners, refined sugars, or even natural sweeteners are added. Culture Pop sells seven different flavors, all containing fruits or fruit combinations. 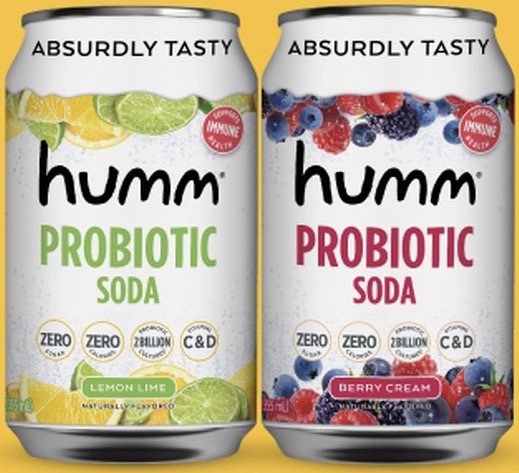 Humm originated from a conversation at the dinner table. Michelle Mitchell was a kombucha home brewer who spent years perfecting her mother-in-law’s recipe. Her friend Jamie Danek took one sip and said it was so amazing that she could sell it to everybody. They first called the company Kombucha Mama, where it was brewed out of Michelle’s kitchen and delivered door-to-door in a Prius. Then Michelle and Jamie began selling it at the farmers market in Bend, OR and developing new flavors. This gave way to them being able to deliver it in a van and series of larger and larger facilities they continually moved into. Along with a change in facility location came the brand name change to Humm, which they felt was more universal and inclusive. Michelle and Jamie also moved into other versions of kombuchas, a zero sugar and a Whole 30, and probiotic seltzer and probiotic soda. Their sodas are made of raw kombucha, allulose syrup, and fruits flavors in the choices of lemon lime or berry cream.

In 2013, Trevor Ross originally made his first Live Beverages as a way to help his father kick his soda addiction. Instead of taking aways his dad’s soda pop altogether, Trevor came up with a soda substitute which tasted like cola. He also felt that making kombucha with pop flavors would help differentiate his kombucha from others in what had became a very saturated market. So Trevor was able to take his drinks made for his father and sell them to help millions of other people make better decisions. Since devising the cola kombucha, Live Beverages now has numerous kombuchas with soda pop flavors. Some of the other kombucha versions of traditional pop are root beer, cream soda, Dr. Pepper, cherry cola, and lemon lime. Live Beverages also produces a probiotic tea. 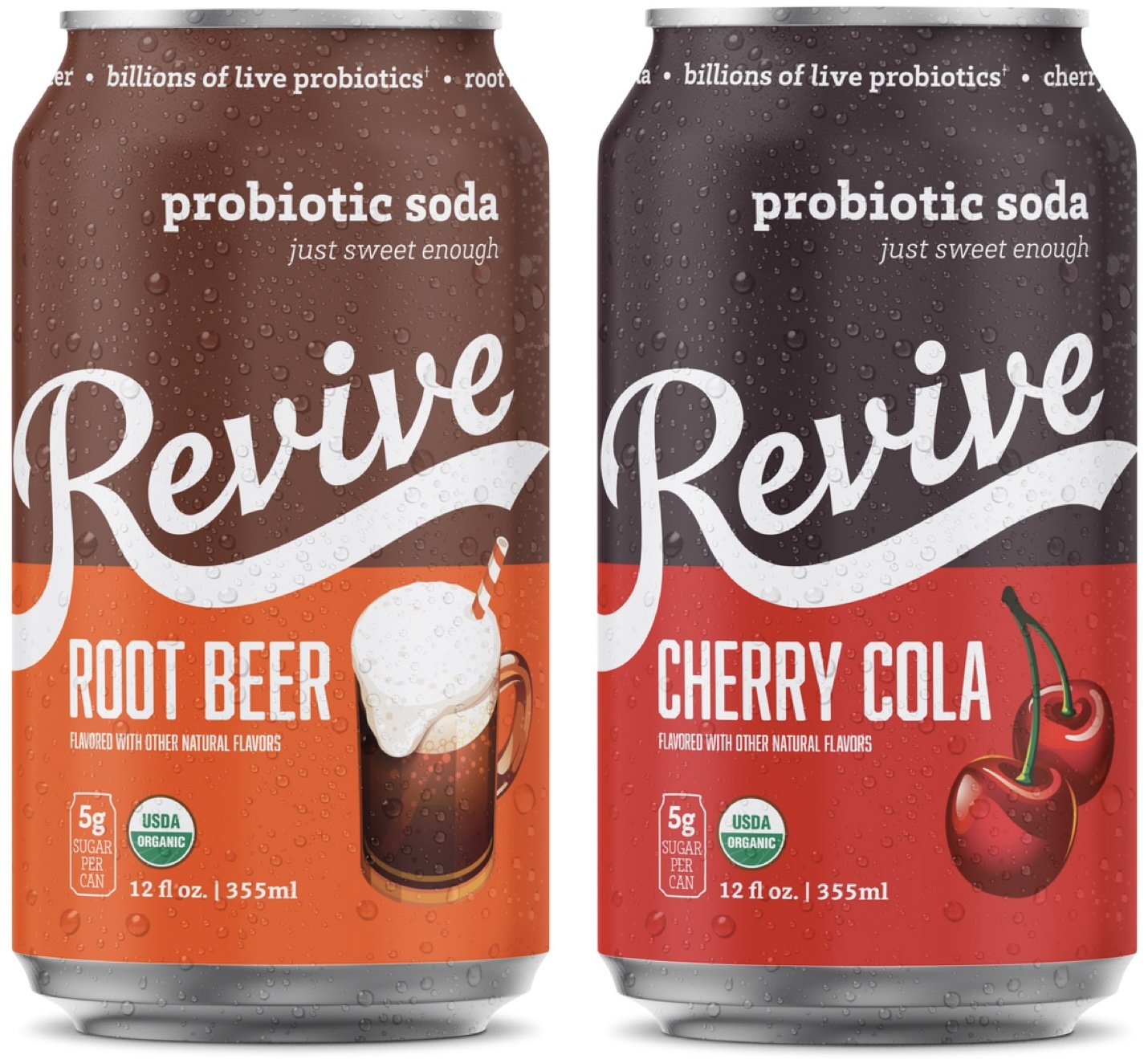 Revive was born based on the idea of making a drink which is both good for you and tastes good. Founders Sean and Rebekah Lovett liked soda, but soda didn’t like them. At the time, Rebekah was working at Whole Foods and introduced Sean to kombucha to help him kick his soda pop addiction. He didn’t like the taste, but he loved the positive effects it had on his body. To make a kombucha Sean and Rebekah liked, they began brewing some in their garage. They then pedaled the kombucha on their bikes 20 miles to a local farmers market. From there, the Lovett’s were able to move the business into a commercial brewing facility and sell it regionally. Today, Revive can also be found through a number of major online retailers. Revive also has probiotic seltzers and probiotic pops, making a healthier version of the beverage which got them into kombucha brewing in the first place. The two types of soda pop Sean and Rebekah currently produce are root beer and cherry cola.