The unifying theme of all of the exhibitors and speakers at the Patchwork Show was food that’s small batch or hand crafted.  These varied from some companies using more conventional ingredients to others that used all natural, local, and organic ingredients.  Pretty much every business there was an improvement over what we see in standard American food.  Even the foods that contained some refined ingredients, such as table sugar, were still hand crafted or small batch and avoided using too many preservatives or additives.  Here are my favorites of the vendors and speakers. 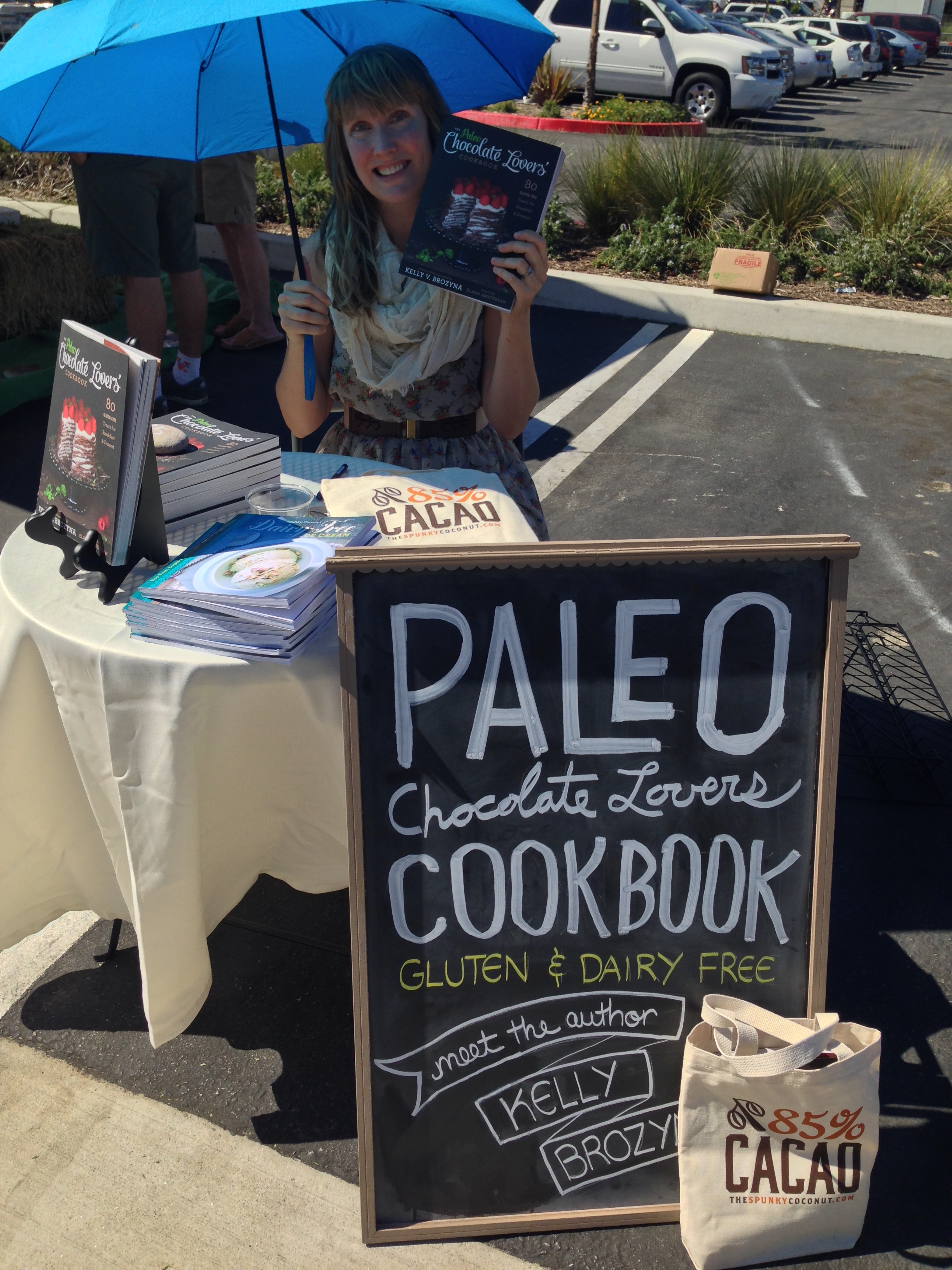 The Patchwork Show held immediate promise as the first exhibitor that I saw was The Spunky Coconut blogger Kelly Brozyna.  I’ve been an admirer of her blog, which is all about paleo and gluten free foods.  Kelly recently moved to southern California from Colorado for the tour of her recently released book The Paleo Chocolate Lovers Cookbook.  It was a pleasure getting to talk to her, one real food blogger to another, and hear more about her story, plus we discussed restaurants and farms in southern California to find nutrient dense food. 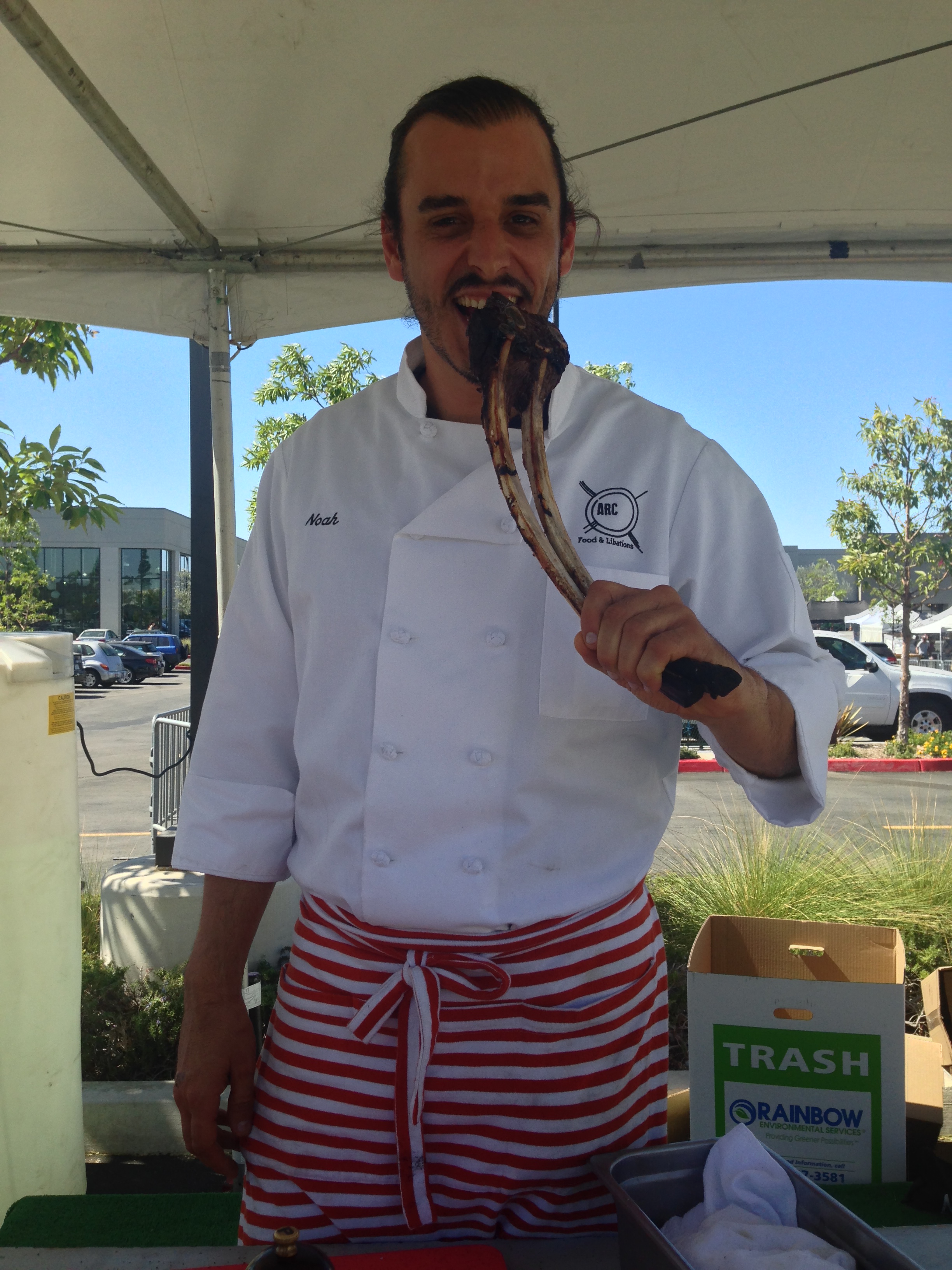 After talking to Kelly, I headed over to my first demo.  Chef Noah Blom has a restaurant Arc, which is in the SoCo Collection.  He gave a presentation on cooking steak.  The audience asked Noah what type of beef he likes to cook with and he responded that he likes grass fed.  He also understands the benefits of cooking meat in saturated fats, such as duck fat.  Many restaurants, even the ones that serve grass fed beef, will cook it in rancid oils like canola. 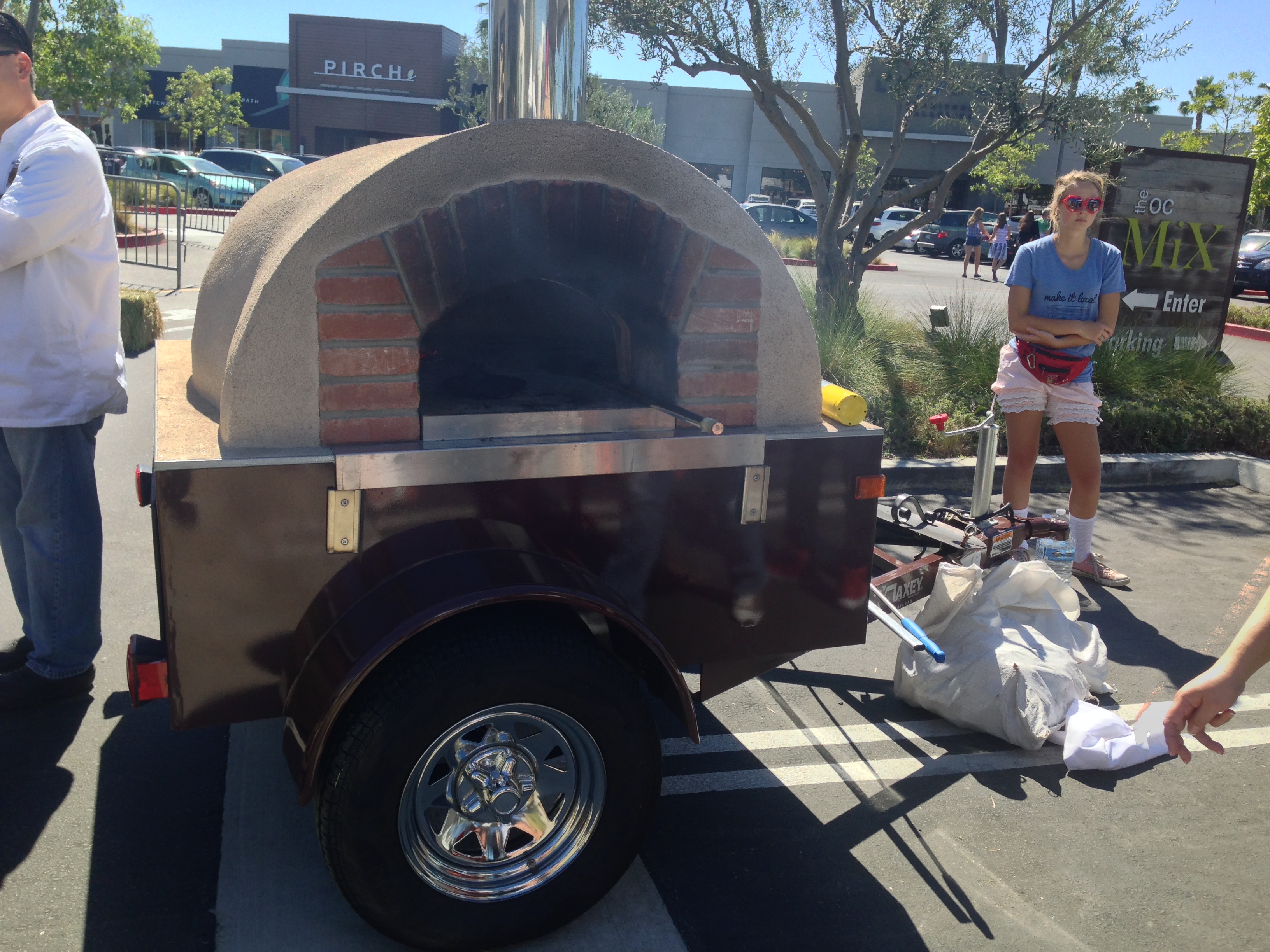 As Noah did his cooking demo, he used a wood smoker, which is the way to go with grilling any meat and it’s how they do it at the Arc restaurant.  Traditional cultures never used gas grills. 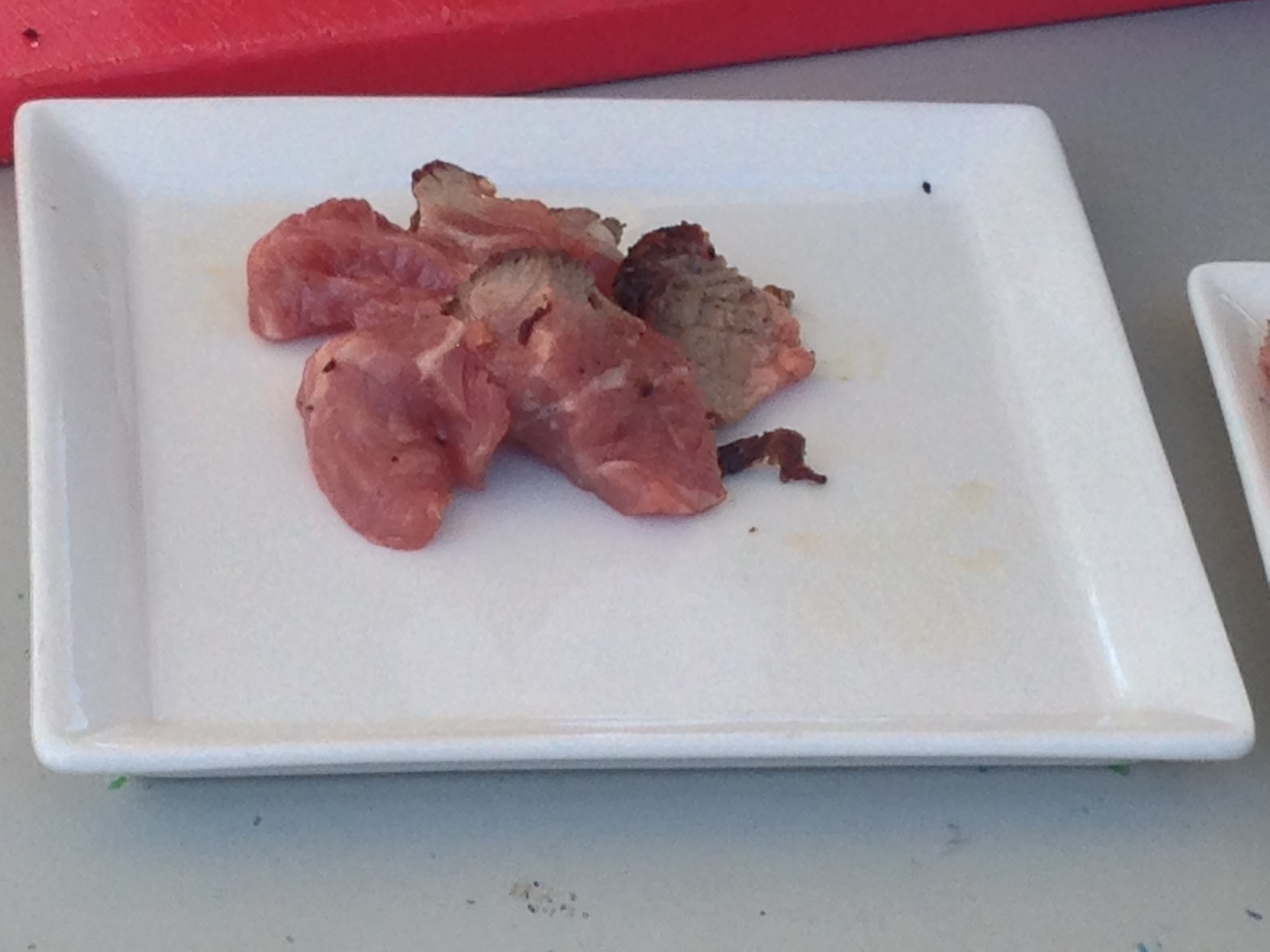 Noah Blom’s demo concluded with everyone getting to sample the tasty meat. 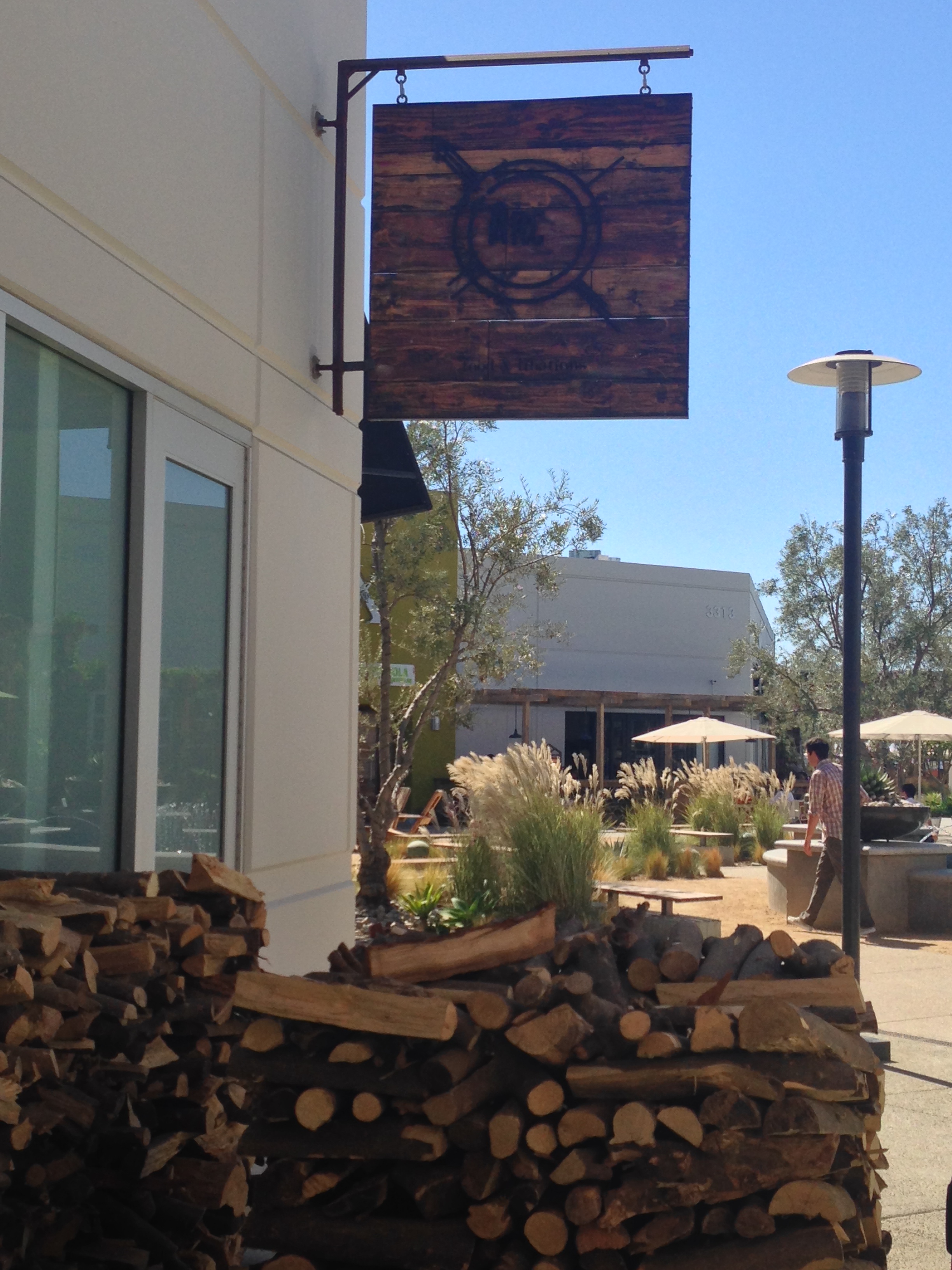 After being impressed with Noah’s demo and getting to meet him, I decided to head on over and check out Arc as it was located in the complex.  As you can tell from outside, everything in their restaurant is wood cooked.

I then returned to check out some more exhibitors.  The following are the food artisans that I loved. 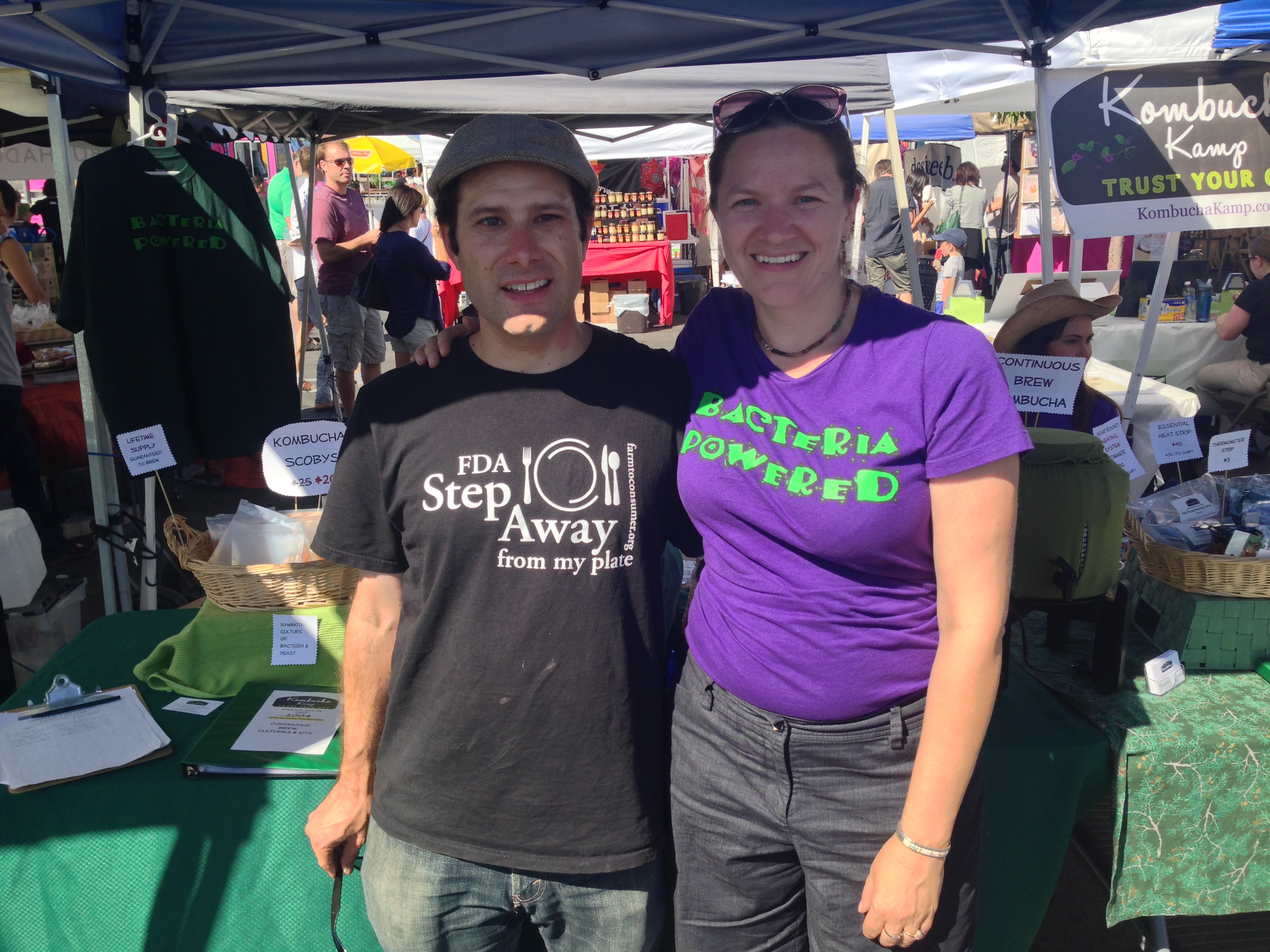 The show was filled with some familiar faces.  My good friend Hannah Crum of Kombucha Kamp was there with her usual samples of kombucha, SCOBY jerky, and her culture petting zoo.  Hannah also gave one of her presentations on kombucha and other fermented drinks.  Additionally, Hannah was able to get a couple of the other kombucha brewers to exhibit at the event. 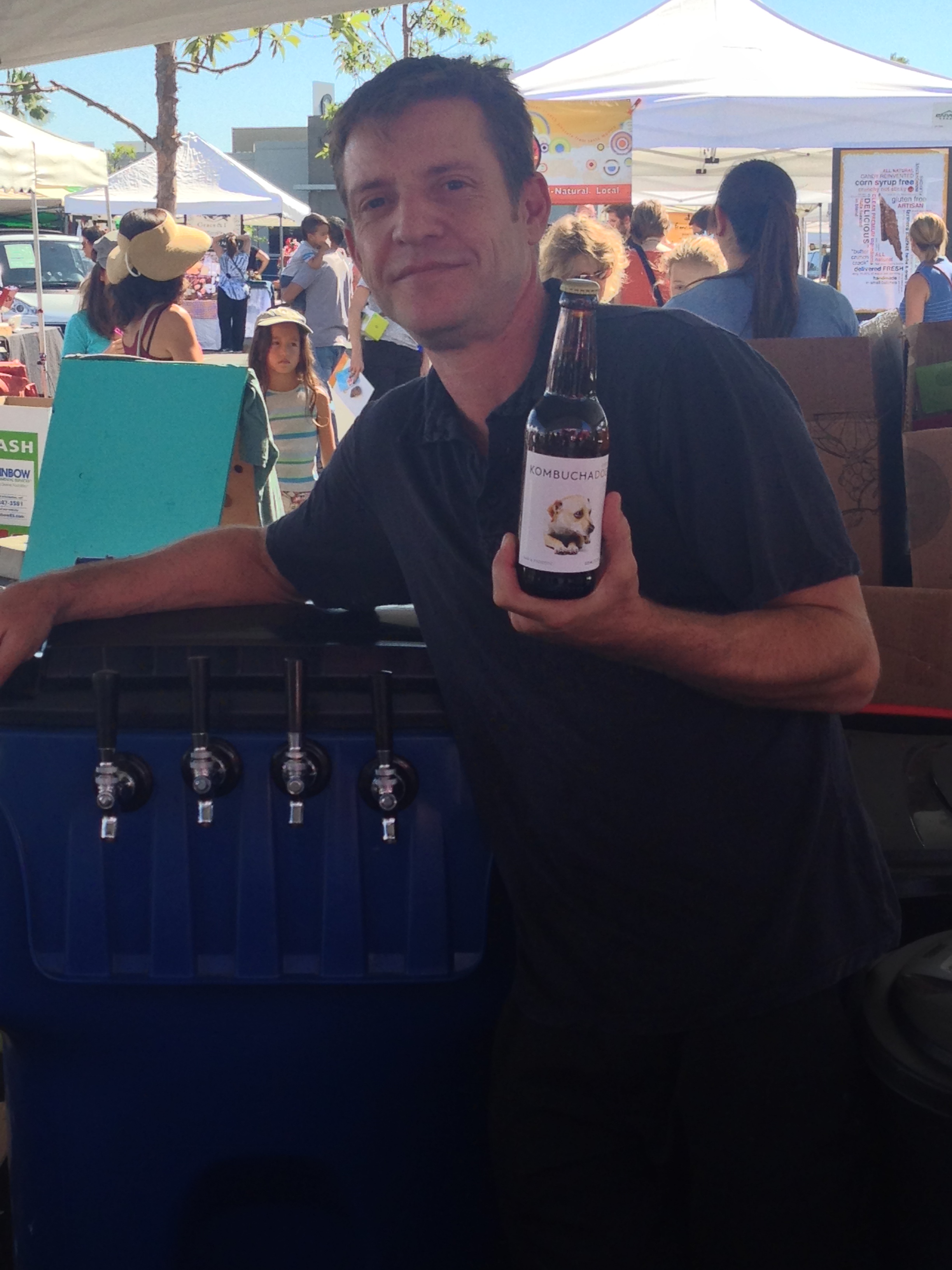 Kombucha Dog is one of the newer kombucha companies.  I’ve always thought drinks taste better on tap, whether it’s soft drinks or beer, so it was great to taste Kombucha Dog from the tap.  My favorite type of fruit is the berry variety, so their blueberry flavor was unbelievable. 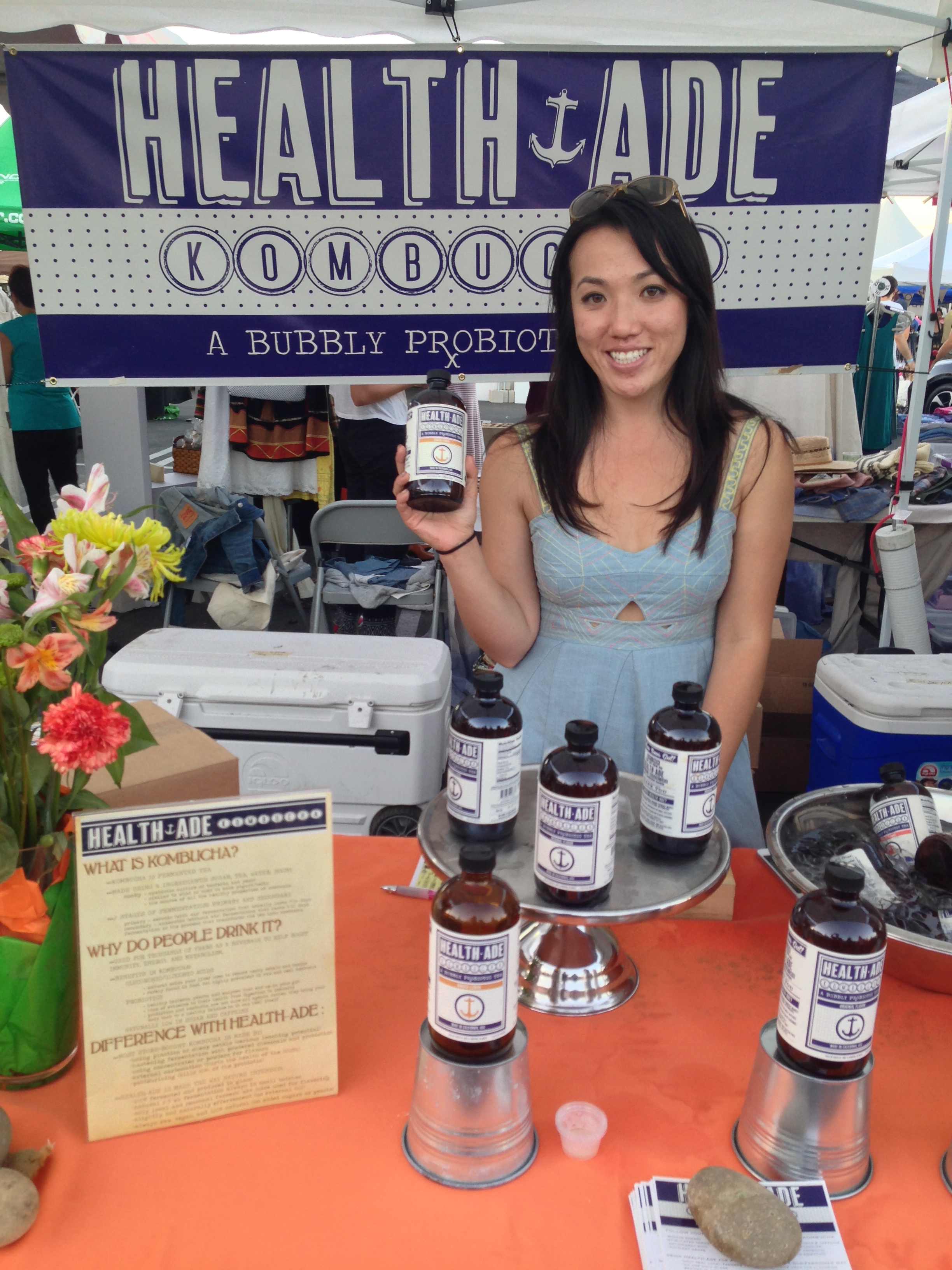 I’ve seen and tasted Health-Ade Kombucha at other food festivals, but at the Patchworks Show, I finally got meet Vanessa Dew, one of the founders and tell her how I’m a big advocate of kombucha and appreciate kombucha brewers like her. 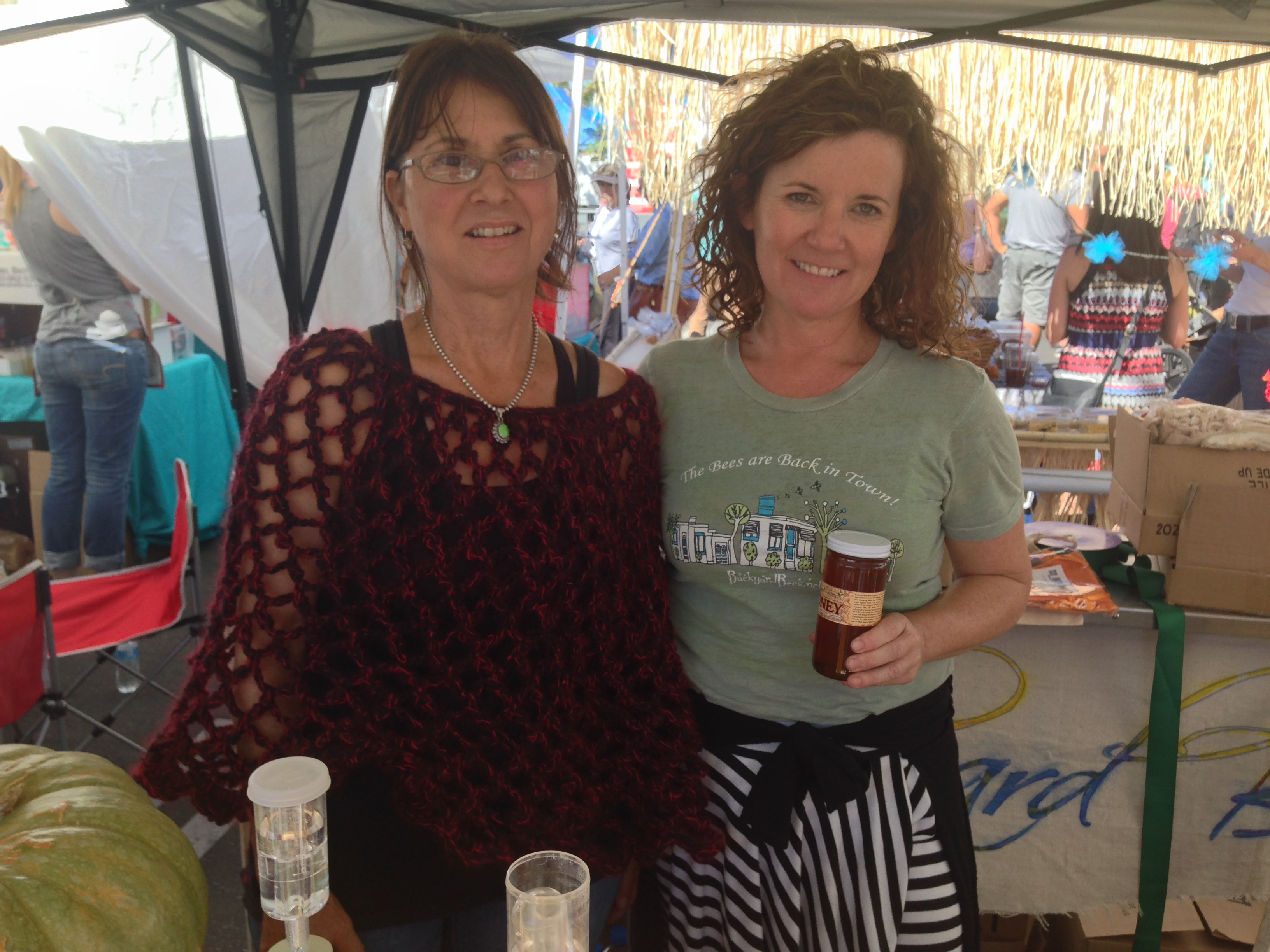 Along with kombucha, another great natural sweet treat is honey.  It can be used in place of sugar in any recipe.  Pictured above are Janet Andrews and Kelly Yrarrazaval, the founders of Backyards Bees.   Their business rescues hives from backyards in the Orange County area and provides people with pure, unfiltered, and untreated honey.  Backyard Bees also sells mead starter kits and skin care products made of beeswax. 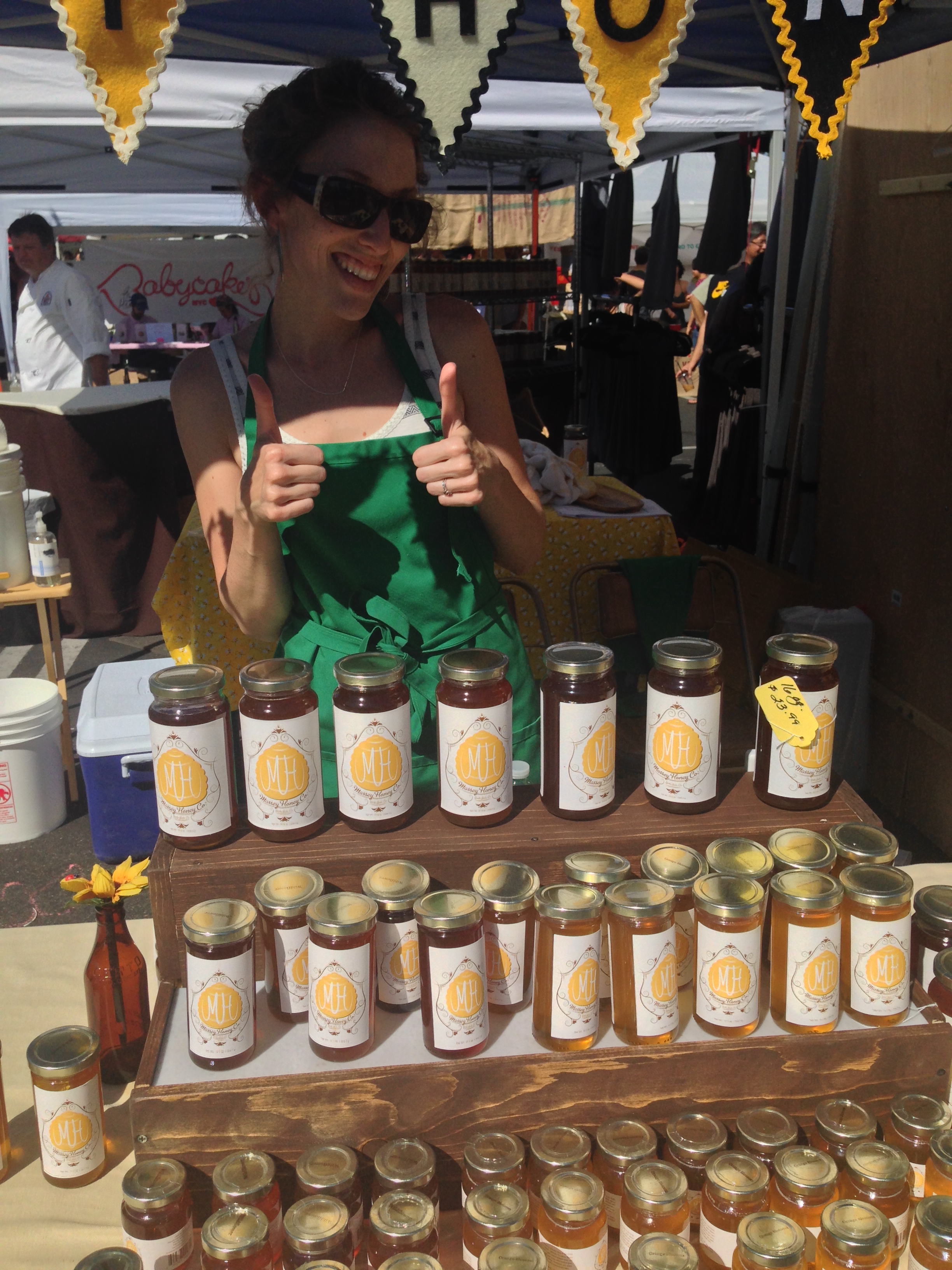 Another honey vendor at the Patchwork Show was the Massey Honey Co.  Like Backyard Bees, Massey sells natural honey in Orange County. 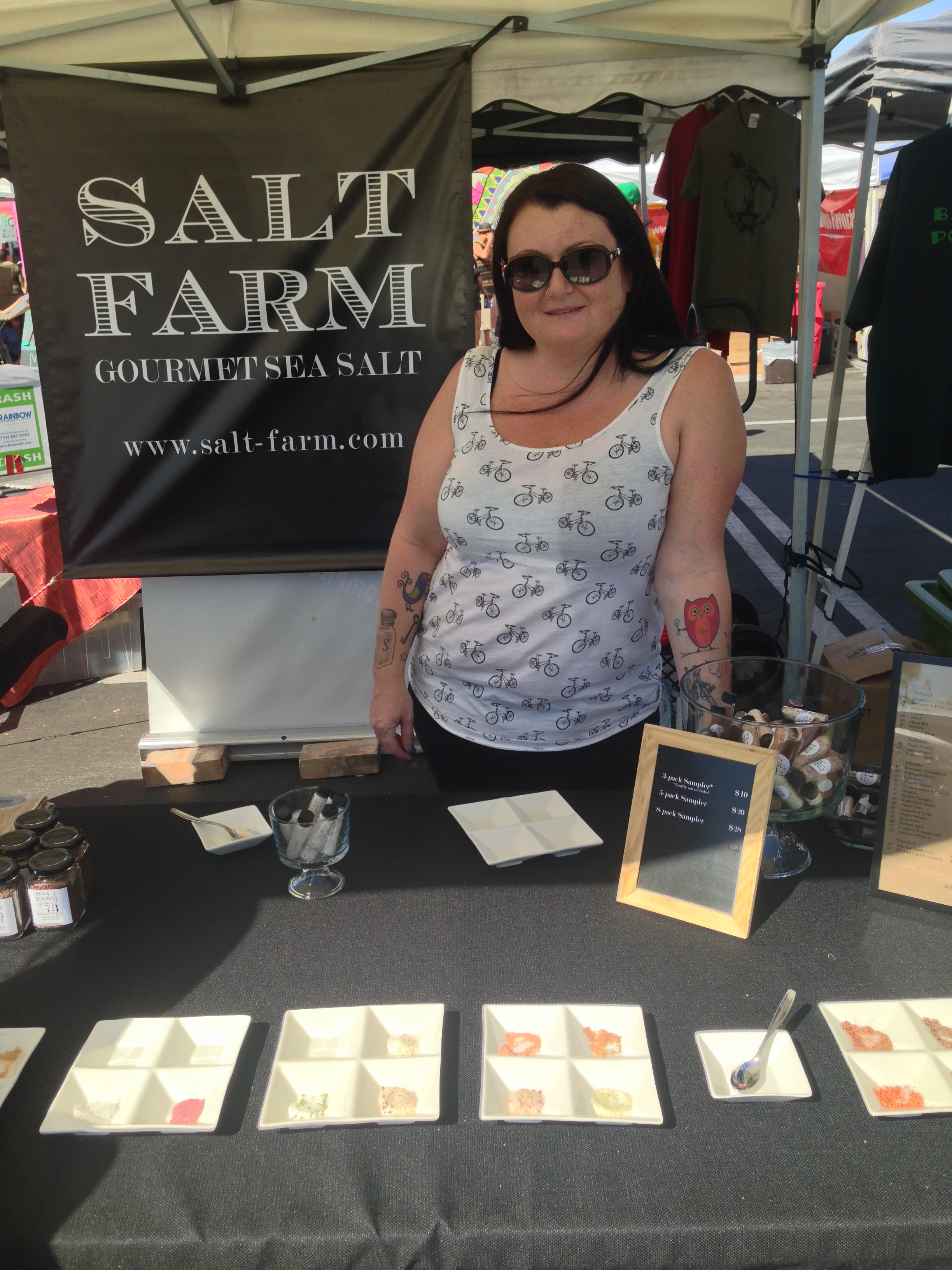 Sea salt is another wonderful natural ingredient.  As our crops all used to grow underwater, sea salt helped in fertilizing them and provided great nutrients for the food.  When plants started growing above ground, our foods lost some of the nutrients and we ended up not getting enough salt in our diet.   When choosing salt, it’s important to go for the pure, unfiltered sea salt and not the refined table salt that’s treated with tons of chemicals.  Pictured above is Tonya Youhanna with her gourmet salts from Salt Farm.  She sells sea salts from the seashores of everywhere from the U.S. to the Mediterranean Sea to Australia.  And Salt Farm has all kinds of flavors from natural sea salt to blends with spices such as dill, sage, and ginger to some bold flavors such as jalapeno, chipotle, and ghost pepper. 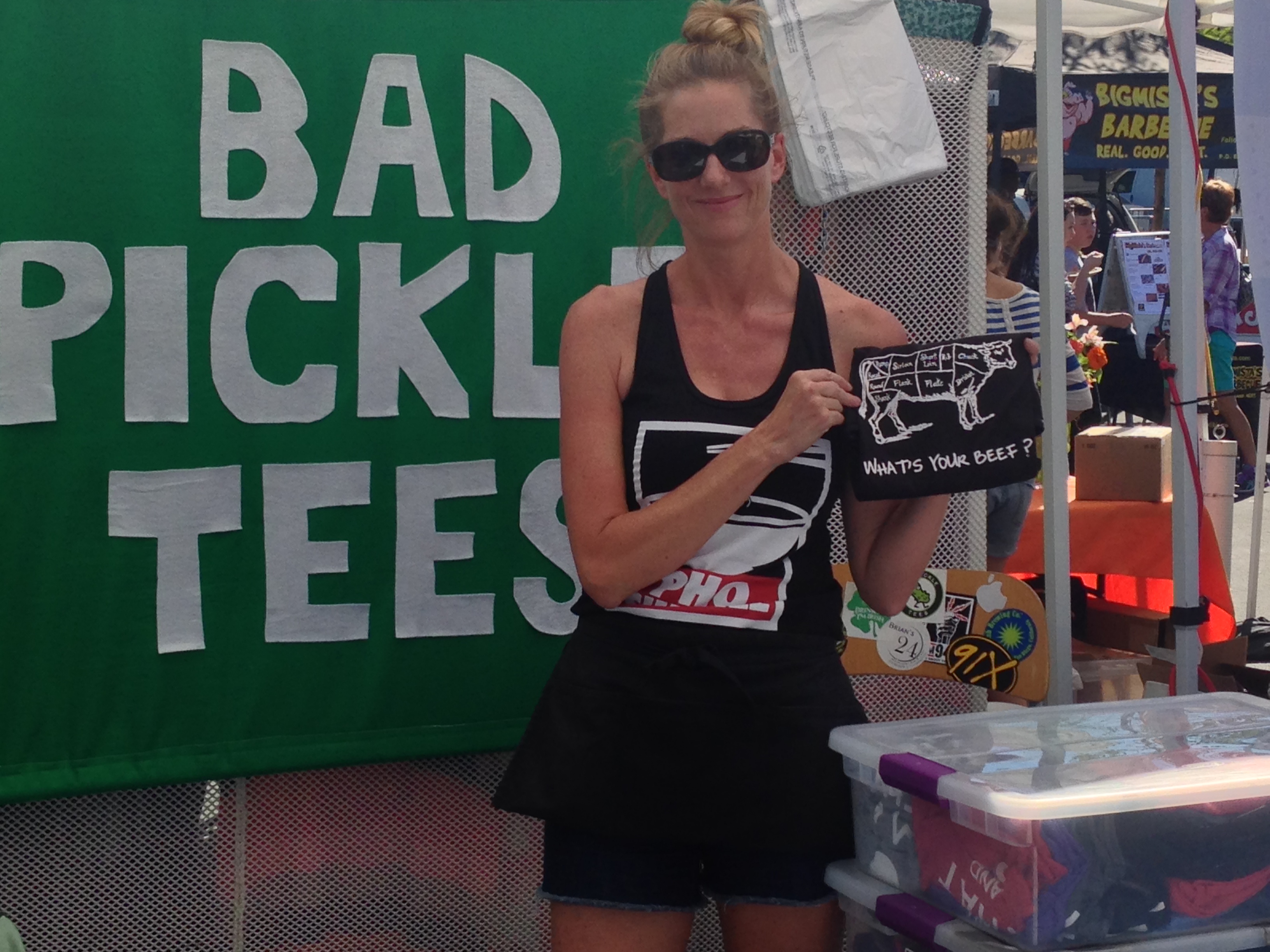 Food vendors made up the majority of the Patchwork Show, but there were other booths with companies and organizations related to food.  This vendor caught my attention, because it’s called Pickle Tees and pickles have always been a favorite of mine.  Then I saw that they had T-shirts talking about eating meat and that was even better.  Pickle Tees creates shirts about all types of food from kale to butter to meat.  As this blog is called The Appropriate Omnivore, of course my favorites were the beef and pork themed ones.  Pickle Tees’ shirts are filled with clever puns, such as “Meat to Please You“, “bacontarian“, and the shirt that owner Cyndi Grasman is holding up – “What’s Your Beef?“