On Rosh Hashanah, it’s a folk custom to dip apples in honey. There are many reasons for this cultural tradition. One is that as Rosh Hashanah is the Jewish New Year, the honey represents a sweet year ahead. Jewish culinary author Tina Wasserman explains that while the biblical description of Israel being “a land flowing milk and honey” refers to a paste made from dates, she then adds “enjoying honey at Rosh Hashanah reminds us of our historic connection with the Holy Land.”

The tradition of honey on Rosh Hashanah may also be for similar reasons that the National Honey Board recognizes this sweetener in September. Rabbi Benjamin Zober says “In our modern society, it is easy to be disconnected from the natural world. Fruit is almost never out of season if you are willing to pay enough. But for our ancestors, you could only eat what was in season. Many Jewish traditions are tied to the land. Our symbolic or ritual foods often go hand in hand with the produce available at that time.”

As there many reasons for celebrating with honey in September, there also many reasons to consume honey in terms of the various natural sweeteners to substitute sugar with. When honey is raw, it’s filled with amylases, which are enzymes that help us digest carbohydrates. By consuming honey, we’re also able to take in the nutrients found in plant pollens. Our blood sugar levels are affected less by honey than refined sugar.

Honey can be used in place of sugar when baking. As honey is sweeter than sugar, you only need to use 3/4 cup of honey for every cup of sugar required in the recipe. Some have found they can even use as little as 2/3 or 1/2 cup.

When looking for the best honey, there are a number of benefits to choosing organic. Organic honey means the beehives were in a location with native vegetation or organic agriculture where no GMOs of pesticides were used. This also involves the hives being built without any chemical glues or plastics and recyclables natural materials like wood was involved in the construction process. Additionally, it means the beekeepers harvested the honey without any synthetic repellents. Organic beekeeping means the harvesters aren’t allowed to kill the bees in the combs in order to produce the honey.

In alphabetical order, here are 12 choices for organic honey which you can find in supermarkets:

Beeresponsible produces Bee Harmony Honey, which is sourced from beekeepers all over the country. The beekeepers all undergo a strict approval and certification process to make sure the honey is absent of sugar, sugar syrups, pesticides, antibiotic residues, and lead, and also to assure the quality of the honey’s color, flavor, and moisture. Every jar of theirs has an eight digit code to trace on their website where the honey came from. Among Bee Harmony’s organic varieties are Brazilian raw, Brazilian rainforest raw, and eucalyptus raw. 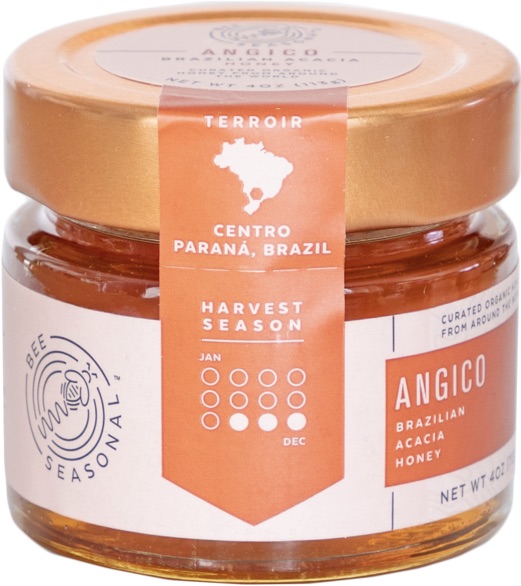 While living in Europe, Bee Seasonal co-founder Larissa saw supermarkets stocking their shelves with seasonal honey from around the world. She was amazed by the flavors, colors, and texture of these honeys. The honey in the United States, on the other hand, was a mixture of honey from various unknown sources. Larissa and Thomas created Bee Seasonal where they trade directly with their beekeeper partners. Each partner is a responsible beekeeper who follows the organic production guidelines. They always pay their partners above market prices for their honeys. And all of their honey is organic. Some of their flavors are blossom flower, wildflower, and eucalyptus. 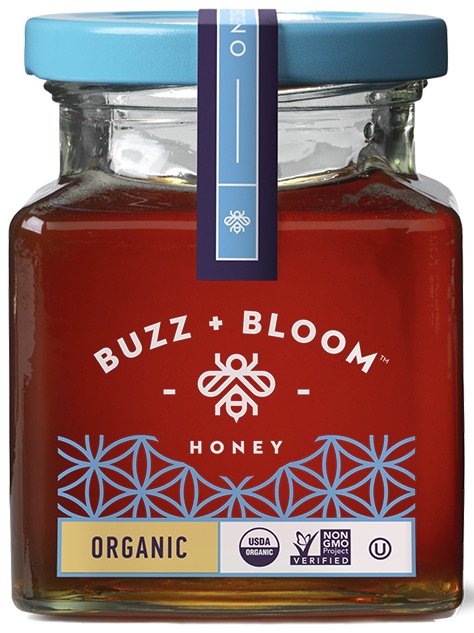 Buzz + Bloom takes pride in the relationship between the bees and the flowers that occurs while honey is being produced. As most honey loses its natural pollen and nutrients by too much heating, filtering, and processing, Buzz + Bloom only gently strain the honey so its natural pollen remains intact. In addition, they package the honey at a lower temperature than typical supermarket honeys, so that theirs still has its beneficial enzymes and antioxidants. 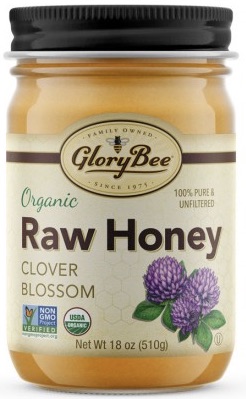 In 1975, Dick and Pat Turanski were raising bees in their backyard and processing the honey in their garage. At that time, they were living the dream of providing natural and healthy ingredients to people in their town. 40 years later, they keep that same spirit alive. Glory Bee‘s organic options are clover blossom and tropical blossom. Glory Bee also has an Aunt Patty label, which makes coconut oil, baking ingredients, herbs, spices, flavorings, seeds, and natural sweeteners.

While Heavenly Organics was founded in 2005, it’s story goes back 35 years ago. Dr. I.S. Hooda helped small farms maintain traditional, sustainable, and organic practices. He also was key in teaching local beekeepers how to extract honey while being sustainable, bee friendly. and smoke free. Flash forward to 2005, Dr. Hooda and his son Amit started Heavenly Organics. Their flavors are white honey, acacia, and neem and are all organic. Along with honey, Heavenly Organics also sells chocolate honey patties, and whole cane sugar. 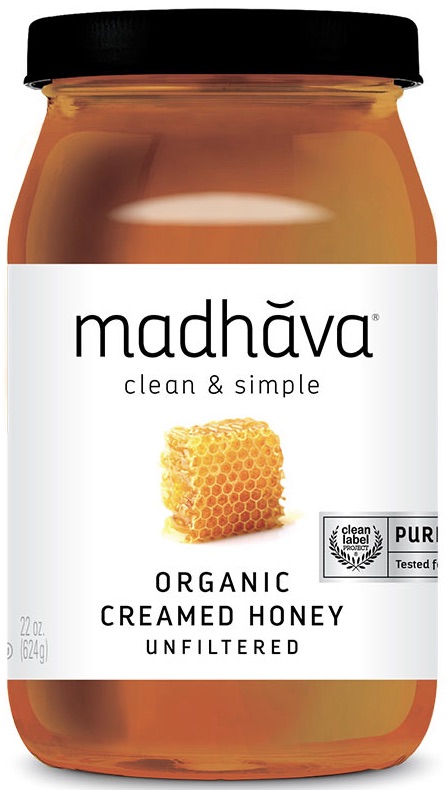 Madhava started making honey in 1973 when they were shocked to discover food companies were using synthetic formulas to mimic real flavors. They traveled all over the world from California to Mexico to Asia to learn what pure honey is like. Their name Madhava literally means “born of honey”. They make organic versions of golden, creamed, and organic honey. Madhava has also expanded into producing coconut sugar and extra virgin olive oil. 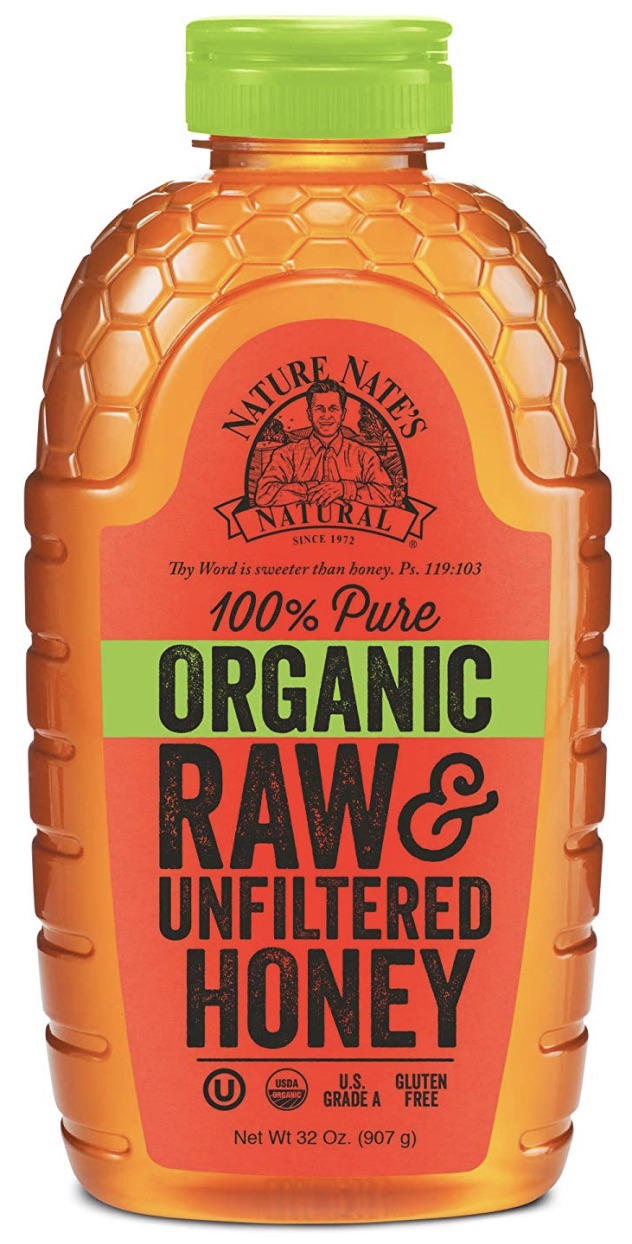 While Nathan Sheets was attending college, he got the nickname “Nature Nate” for his love of nature and the outdoors. After graduating college, he started an ad agency and served in the ministry. Back then honey was just a hobby of his. He bought a beehive after getting married and soon started making it in his garage. Then in 2010, he began producing honey full time with his Nature Nate‘s business. His honey all goes through an extreme testing procedure to make sure it’s 100% pure and free of any pesticides, herbicides, antibiotics, or rice or corn syrup. 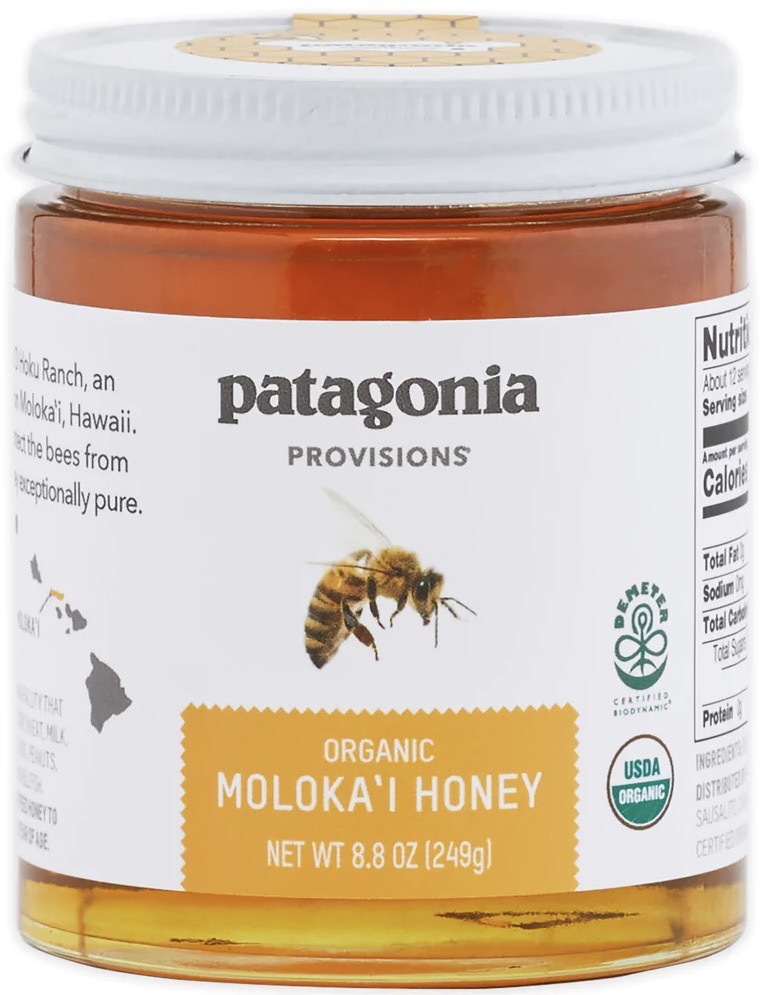 While Patagaonia is best known for selling outdoor clothing, their subsidiary Patagonia Provisions has been offering a diverse variety of sustainable foods since 2012. Founder Yvon Chouinard explains that as a lover of the outdoors, it’s important to venture into any business opportunity which helps save our planet and species from the destructive habits it’s facin. Patagonia supports regenerative organic farming in order to build healthier soil and sequester carbon. They also support sustainable fishing practices. Patagonia Provisions views itself as a triple bottom line of “food, water, and love”. Their products range from meat and seafood to soup to beverages to pantry items such as honey. 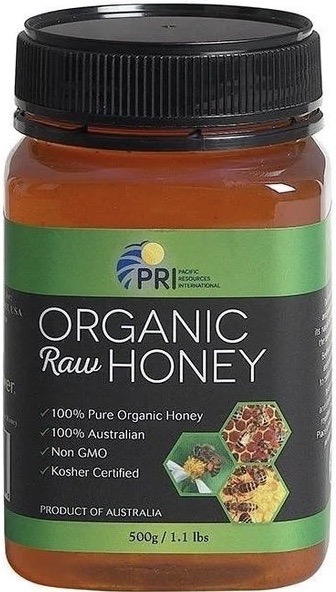 As a surfer and guitar player, PRI founder Dave Noll traveled to New Zealand for adventure. The trip end up changing both his professional and personal life forever. He met a woman he fell in love with, stayed there to live with her for a number of years, and had a family before eventually moving back to Dave’s hometown in California. In 1987, he founded Pacific Resources International (PRI) and became the first to introduce Mānukah honey to the United States, making the case that the product is marketable worldwide. PRI produces a number of Mānukah honey products and has since added other types of gourmet honey to its line, including an organic honey from Australia. 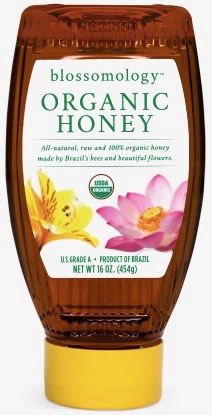 Sioux Honey dates back to 1921 when natural was the standard for food, so no products needed to use that label. 100 years later, they continue in their commitment to providing real honey. Originally five beekeepers in Sioux City, IA formed a co-operative where all of the family farmers got an equal city in any business decision. Sioux Honey now consists of around 315 beekeepers in over 30 states. They have several labels: Sue Bee, Aunt Sue’s, Beek’s and their organic brand Blossomology. Blossomology comes from bees in Brazil. 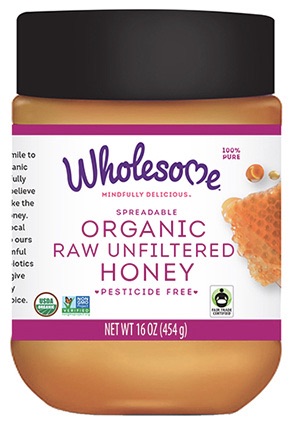 Originating in 2001 out of the appropriately named Sugar Land, TX, Wholesome Sweeteners was formed to sell organic cane sugar. The company soon began expanding its line into other types of natural sweeteners and launched a fair trade organic honey in 2005. Wholesome sweeteners sells all types of organic, non-GMO natural sweeteners, including whole cane sugar, coconut sugar, and molasses. They also make a variety of candies using cane sugar. 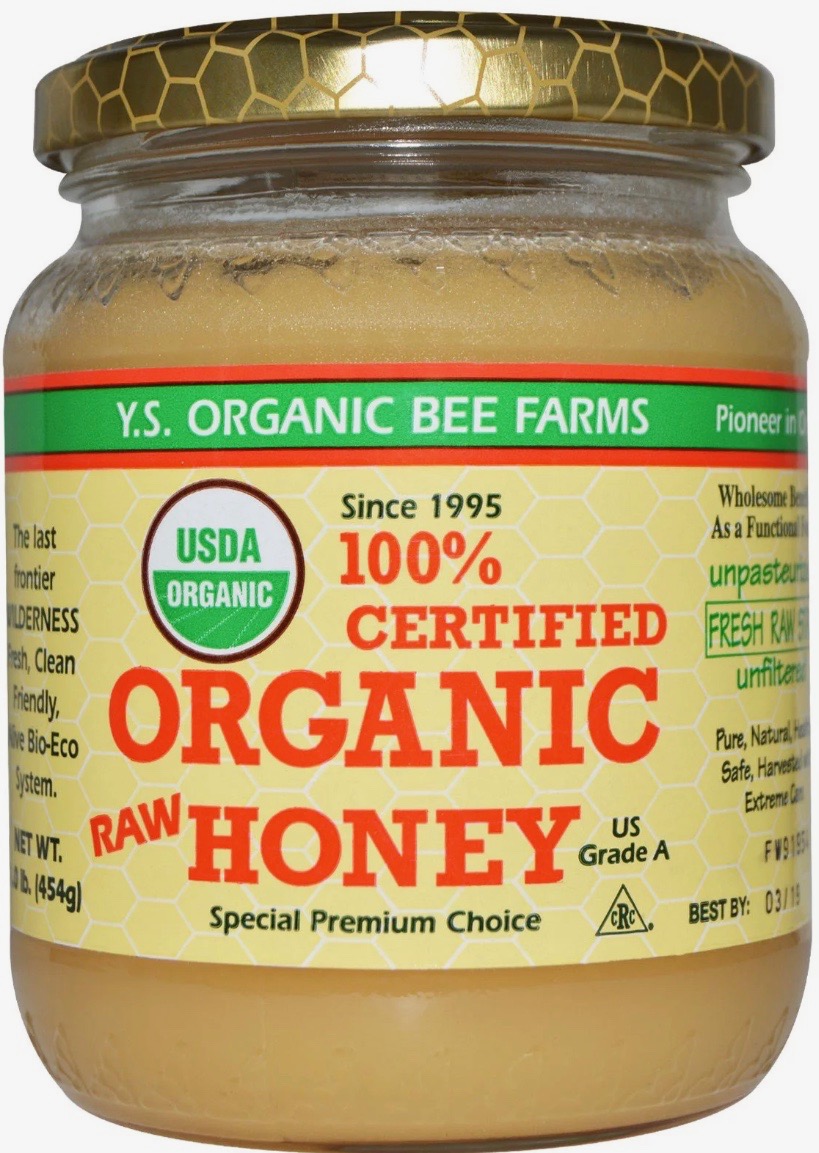 Y.S. Eco Bees Farms was created in 1985. They had long been devoted to organic bee products and put in extensive research and development to the area. In 1995, their honey became among the first to receive organic certification by the Organic Crop Improvement Association. Y.S. Bee Farms works with beekeepers in the United States, Canada, Brazil, and New Zealand.