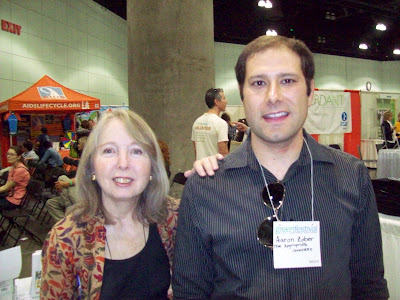 LA WAPF chapter co-leader Victoria
with me at the LA Green Festival.

Yesterday, I posted about getting the unforgettable opportunity to speak with the Weston A. Price Foundation at the Green Festival. While I was there learning more about their dietary lifestyle, I also was able to speak to all four of the WAPF members present at the booth to hear their personal stories. I also found out how their booth fared at a festival where most food organizations there were vegan or vegetarian related.

First, I was ecstatic about getting to talk to fellow blogger Ann Marie. She runs the site Cheeseslave, which offers lots of great insight on traditional eating as well as a diverse list of recipes for healthier, more sustainable foods. She also maintains the website Real Food Media, which is a network of bloggers to devoted to the Weston A. Price Foundation‘s wise traditions. Ann Marie has been a WAPF chapter leader in Los Angeles and is now is looking to be a part of the Las Vegas chapter.

Ann Marie became involved with the Weston A. Price Foundation four years ago, because of her daughter. She was vegetarian in college, which resulted in a mouthful of cavities and a root canal. She then developed candida, where she could only eat meat and fish and had to avoid gluten andgrains. Eating meat and fish again was able to cure Ann Marie’s arthritis and this changed her outlook on consuming animal products. Her negative reactions to gluten and grain are now reversed and she’s in good health by sticking to the real food movement.

I then met up with Victoria, the current Los Angeles Weston Price chapter co-leader. She’s been working with the organization almost since its birth in 1999 and was one of the first chapter leaders. She learned about the WAPF while hearing a Sally Fallon interview on the KPFK radio station. Victoria previously was on a vegan diet where she was unhealthy for six years. She was bloated and broke out all the time. After leaving veganism, all aspects of her health got better – nails, hair, skin. Despite being with the WAPF for over a decade now, Victoria says she still adjusts to new regimens every day.

The next Weston Price member that I spoke to was Angie, who chairs the Redondo Beach chapter and has been with the organization for a little over five years. Angie always had an interest in eating well and being outdoorsy. During a Los Angeles triathlon in 2000, she met a chiropractor who told her to stop drinking milk. She then discovered the WAPF and realized she could drink raw milk to be healthy.

Lastly, I talked to Dennis, who’s been with the Weston A. Price Foundation on and off for 10 years. He learned about the organization from people with a similar raw diet to his. Dennis loves eating raw meats such as sashimi, ahi, and liver.

While the Los Angeles Green Festival covered a wide range of environmental issues, including renewable energy, natural cleaning products, water safety, business with green programs, and general eco-conscious organizations, most of the booths dealing with food were either for vegan products or animals rights. I was beyond thrilled to see that the WAPF had a booth where they provided a different point of view that was much needed. It’s similar to the reason I started my blog.

Victoria said they were unsure of how the Weston A. Price Foundation’s presence at the Green Festival would go over, but it ended up being a great experience. People that stopped by were very open and interested. Their eyes lit up when they heard butter is good for you. For me, it was great connecting with an organization that supports a lot of the same principles as me, such as pasture raised meats and moving away from processed foods. Having the chance to talk with them, I’m now eager to learn some of their recipes and make my diet even more natural.