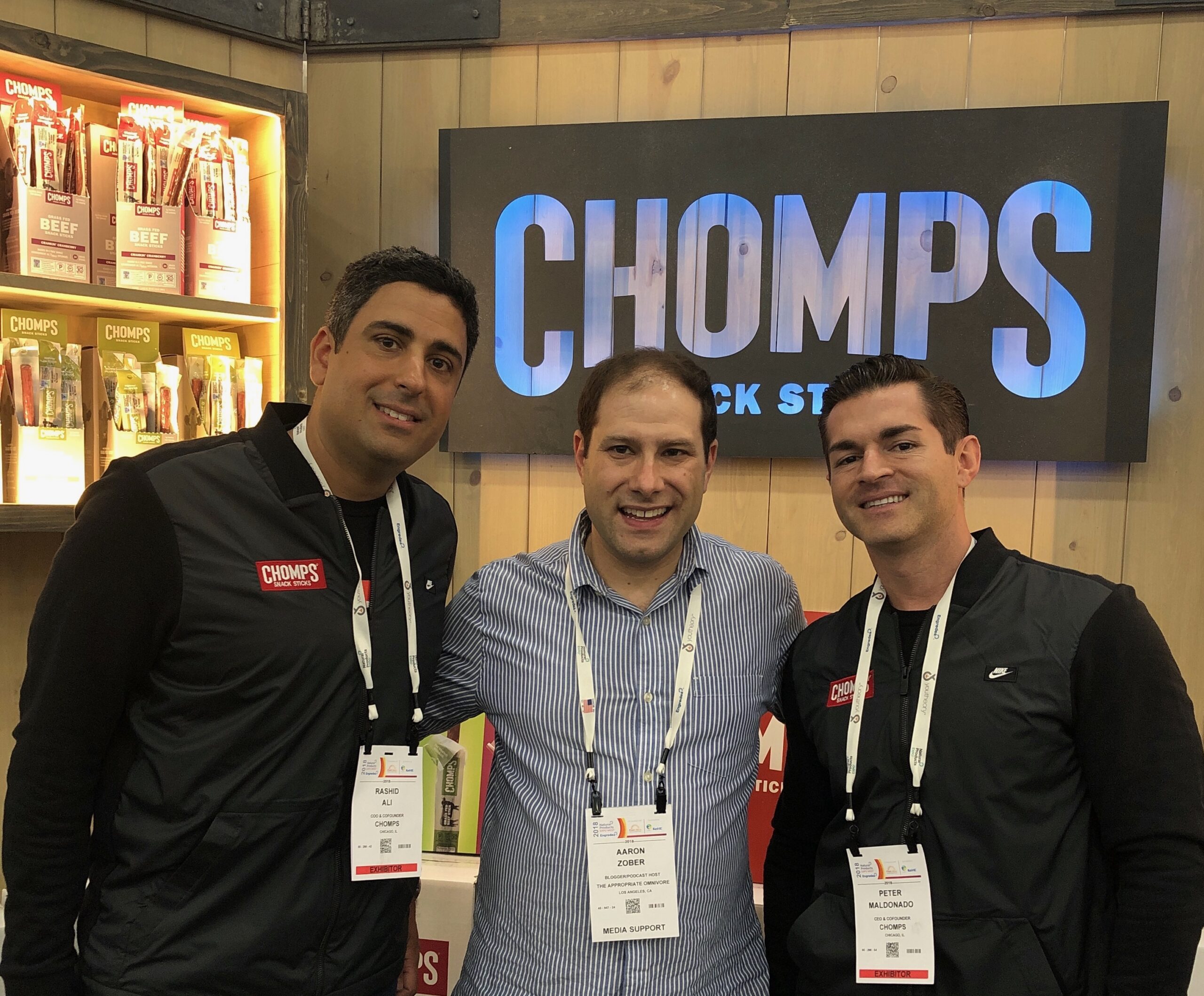 September 23 is celebrated as National Snack Stick Day to honor on-the-go snacks. Meat snacks, which snack sticks are included under, are the fourth highest selling product in the salty snack sector. Meat snacks are more popular than pretzels and popcorn. While snack sticks in concept are a real food, so many of the jerky products available to consumers use factory farmed meats and are loaded with GMOs and artificial ingredients.

For me, my memories of meat sticks are noshing on them while on vacation with my family and hiking in the state parks. As a kid, I have fond memories of these meat sticks. They had a nice flavor with their spices and seasonings. But the ones I ate were unfortunately among the unhealthy kinds.

I’ve had the pleasure of learning about many new meat stick companies using 100% grass fed meats at the conventions I’ve attended over the years. It’s delightful to hear that many of them founded their brands for the reason that they also saw only unhealthy snack sticks in stores. This trend continues to grow. And these grass fed sticks are no longer found exclusively at the natural foods stores. As I was driving up to the Bay Area last year, I noticed venison sticks at a convenience store off right off the I-5 going through the Central Valley of California.

Sticks with real meat and real ingredients can also be considered a traditional food. In fact, they use one of the oldest methods of preparing meat. As meat sticks are smoked, the concept of cooking meat over fire  goes back to the earliest humans in existence. Fresh meats were subject to decay and insect infestation, so people began drying and smoking it to help it last longer. Meat sticks themselves likely evolved from the sausage, which can be traced back to Mesopotamia in 3100 BC.

Similar to how earlier cultures and civilizations used all kind of wild animals for their smoked meats and sausages, many of these new grass fed sticks are also using more gamey animals such as bison, venison, and elk. With all the grass fed options out there now, it’s a treat that I can eat meat sticks again.

In alphabetical order, here are the 14 best brands of grass fed sticks: 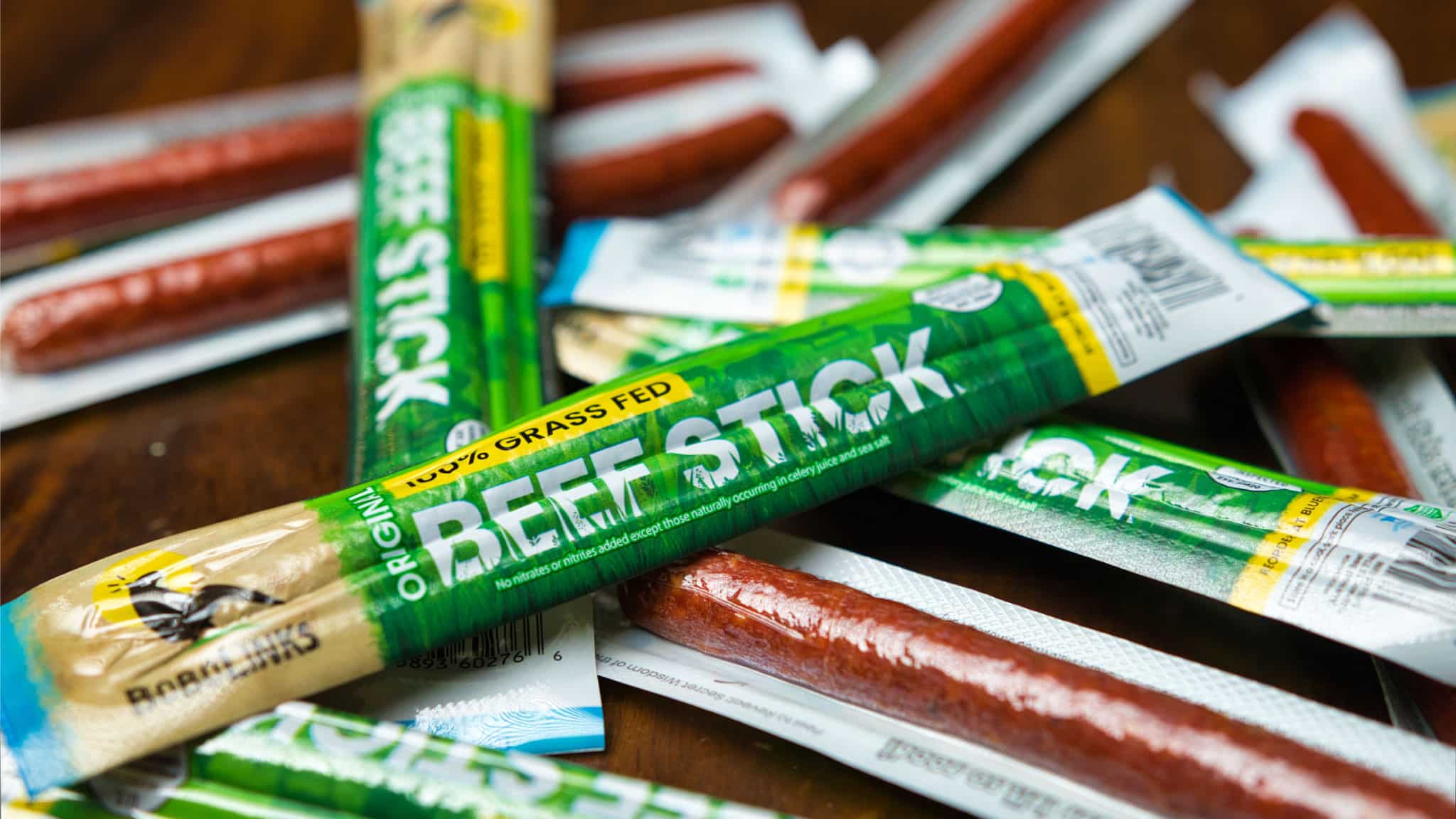 Blue Nest Beef not only sources 100% grass fed beef, but they also work with the National Audobon Society to certify that their cattle is grazing bird friendly land. The Audobon Conservation Ranching Program looks for standards in the four areas of habitat management, forage & feeding, animal health & welfare, and environmental sustainability. Additionally, all of their beef comes from farms in the United States. Through Blue Nest’s website, consumers can purchase boxes of various cuts of beef and chicken. More recently, Blue Nest introduced the BoboLinks grass fed beef sticks, the first beef stick to Audobon certified. 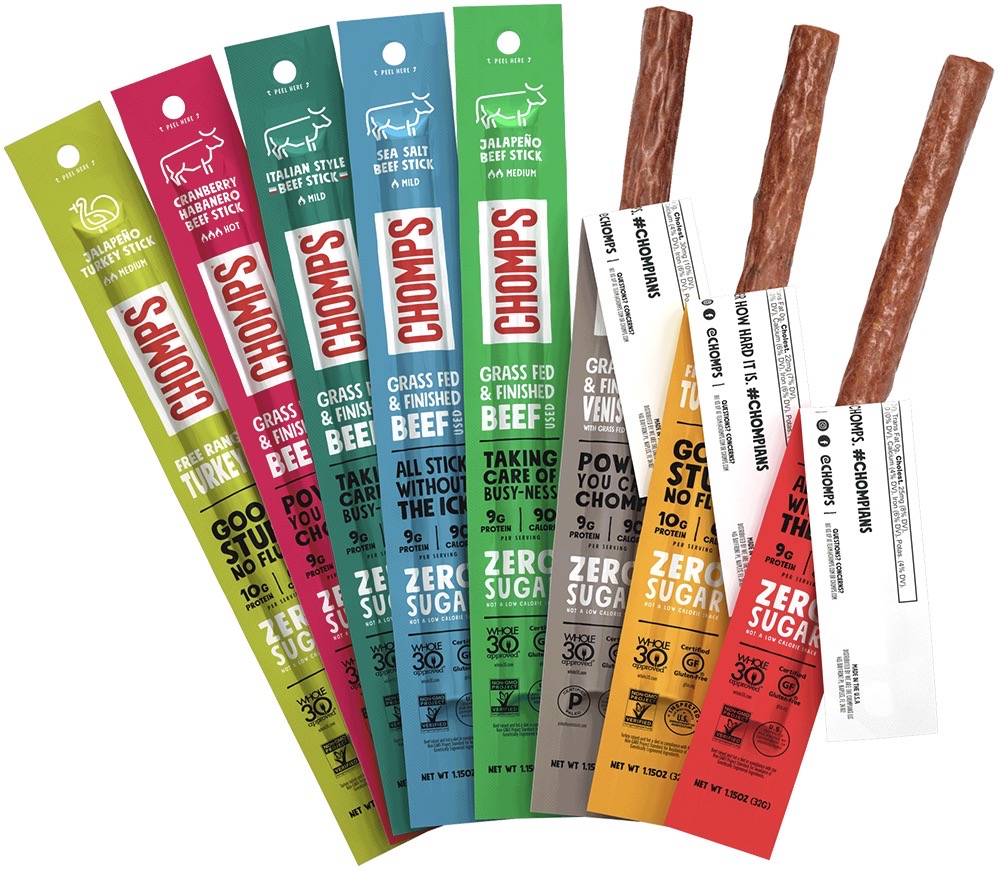 Peter Maldonado and Rashid Ali founded Chomps when they were both single, young professionals who needed an on-the-go protein. They saw a lot of conflicting information in terms of what healthy food is and realized others were having problems knowing what was good for them. Peter and Rashid then figured they could make it easy for everybody by providing basic snacks sourced with high quality proteins and no secret harmful ingredients. Now both of them have families and they’re able to share their healthy snacks with their kids as well. They produce beef sticks of various flavors along with some venison and turkey sticks. 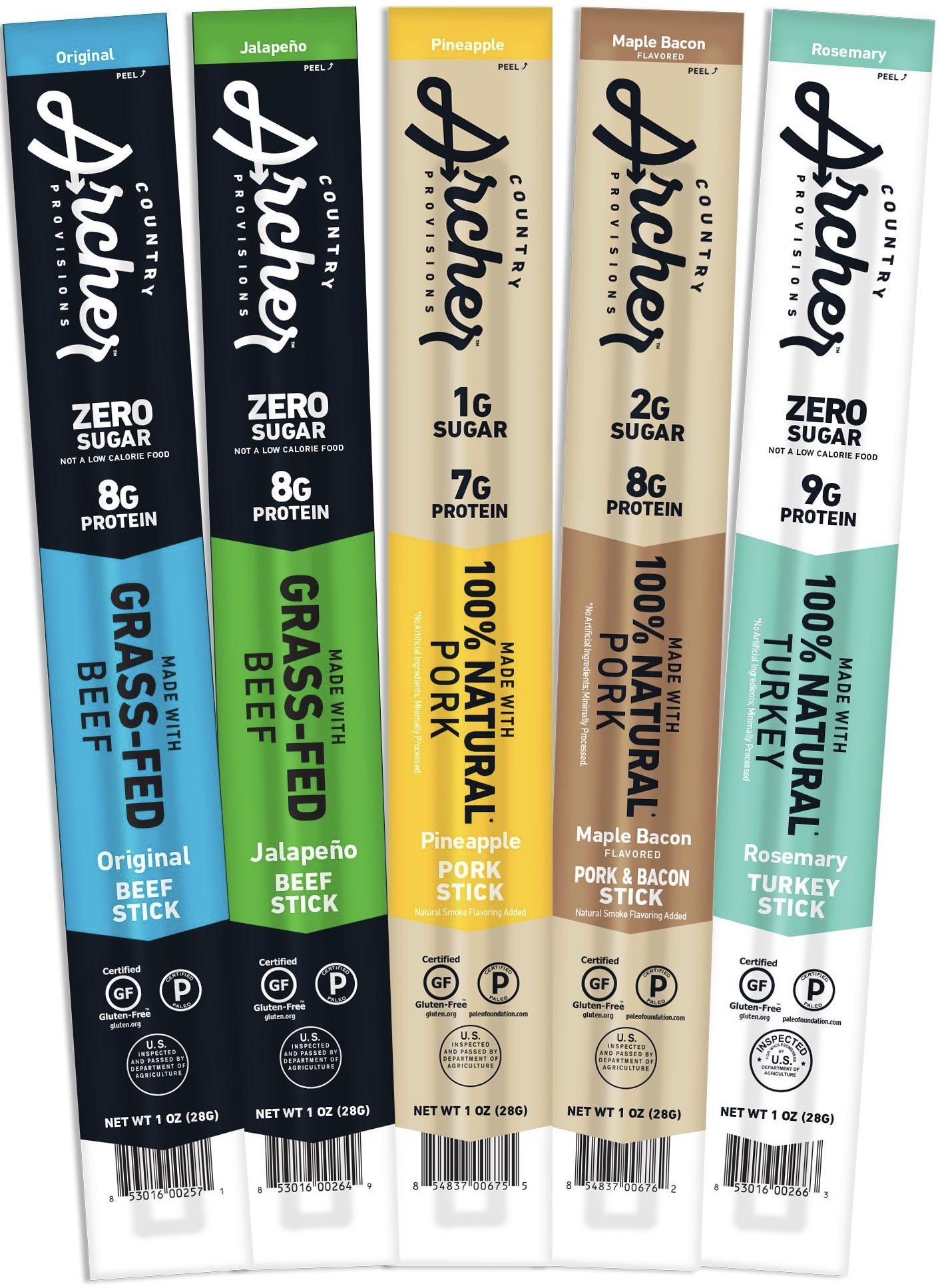 Country Archer dates back to 1977 when artisan butcher Celestino “Charlie” Mirarchi began making jerky. He was so busy making jerky, that he couldn’t find time to sell it. While a best keep secret for a while, his jerky was eventually discovered when Eugene and Susan Kang stopped by a roadside stand on their way to the Grand Canyon. The three then went into business together and began getting Country Archer jerky and meat sticks into specialty grocers and eventually selling it all over the U.S. Eugene and Susan never believed in taking shortcuts and always continued to use grass-fed beef, cage-free turkey, and quality pork like Charlie did. 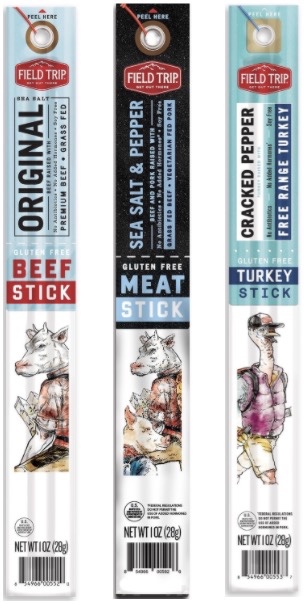 In 2010, three friends in a New York City apartment agreed they needed to change the meat snack world after tasting craft jerky on a ski trip in Vermont. This led to them forming Field Trip. Founders Tom Donigan, Matt Levey, and Scott Fiesinger all felt it was important not only to come up with protein-rich snacks which are healthy, but also ones which were high quality and tasted great. After starting with jerky, Field Trip expanded into other types of meat snacks. This includes their snack sticks made of beef, pork, and turkey. 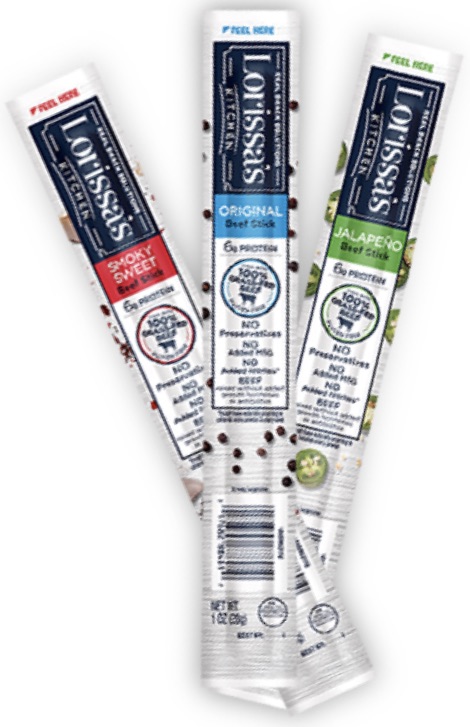 Lorissa Link’s first job was on a farm close to her hometown in southern Minnesota. From that job, she gained an appreciation for real food and the hard work it takes to put it on the table. After entering motherhood, she came to a realization that so many kids’ snacks were missing the real food ingredients which she grew up with. The products were instead packed with preservatives, MSG, and nitrates. She decided to launch Lorissa’s Kitchen to fill this void. Her products include snack sticks made of 100% grass fed beef and free of added growth hormones.

In 1988, seven Wisconsin farmers in the Coulee region were fed up with industrial chemical farming taking over the American agriculture system. They created a cooperative of family farms known as CROPP (Coulee Region Organic Produce Pool). The coop later became Organic Valley, specializing in organic dairy. In 1996, they moved into the meat industry, creating a label which would eventually be called Organic Prairie. They were the first in the industry to ban animal by-products from a cow’s diet. They also were instrumental in forming the standards for organic meat certification. In 2015, Organic Prairie introduced the Mighty Bar, a bar made of 100% grass fed beef. A year later, they delved into beef jerky and then beef sticks the following year with the name Mighty Organic. 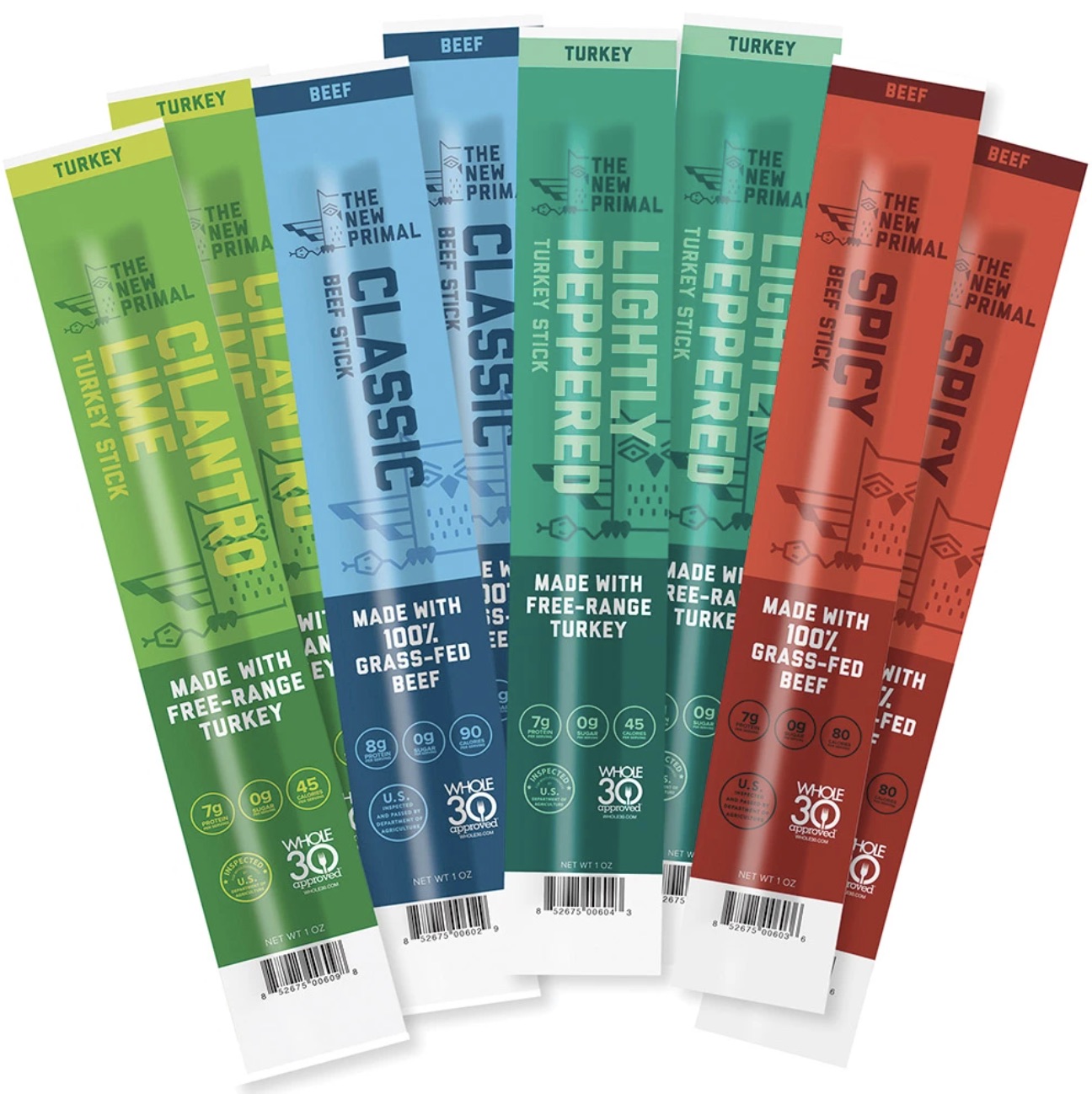 After graduating college and being concerned about the junk food in the vending machine at work, health conscious omnivore Jason Burke started making his own beef jerky to keep in his desk drawer. His jerky used grass fed beef, simple spices, and a dehydrator in his kitchen. His co-workers soon saw and smelled his wonderful creations. He concocted a variety of flavors which resulted in multiple orders from people. This planted the seeds for The New Primal to debut in 2012. The New Primal has since expanded into other types of snacks, including beef and turkey sticks, and even ventured into the condiments world to appeal to vegetarians. 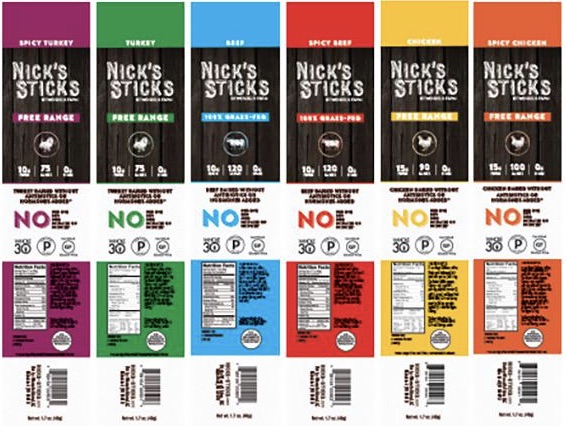 In 2011, Nick’s Sticks was founded out of the desire to produce quality, protein rich, meat snacks. Nick’s Sticks prides itself on sourcing cattle raised on lush grass with plenty of sunshine and poultry growing and thriving in a free range atmosphere. They describe themselves as using the highest-quality food products and ingredients without sacrificing taste or flavor. All of their snack sticks are hand crafted locally in small batches. Nick’s Sticks has flavors in both original and spicy for beef, chicken, and turkey. 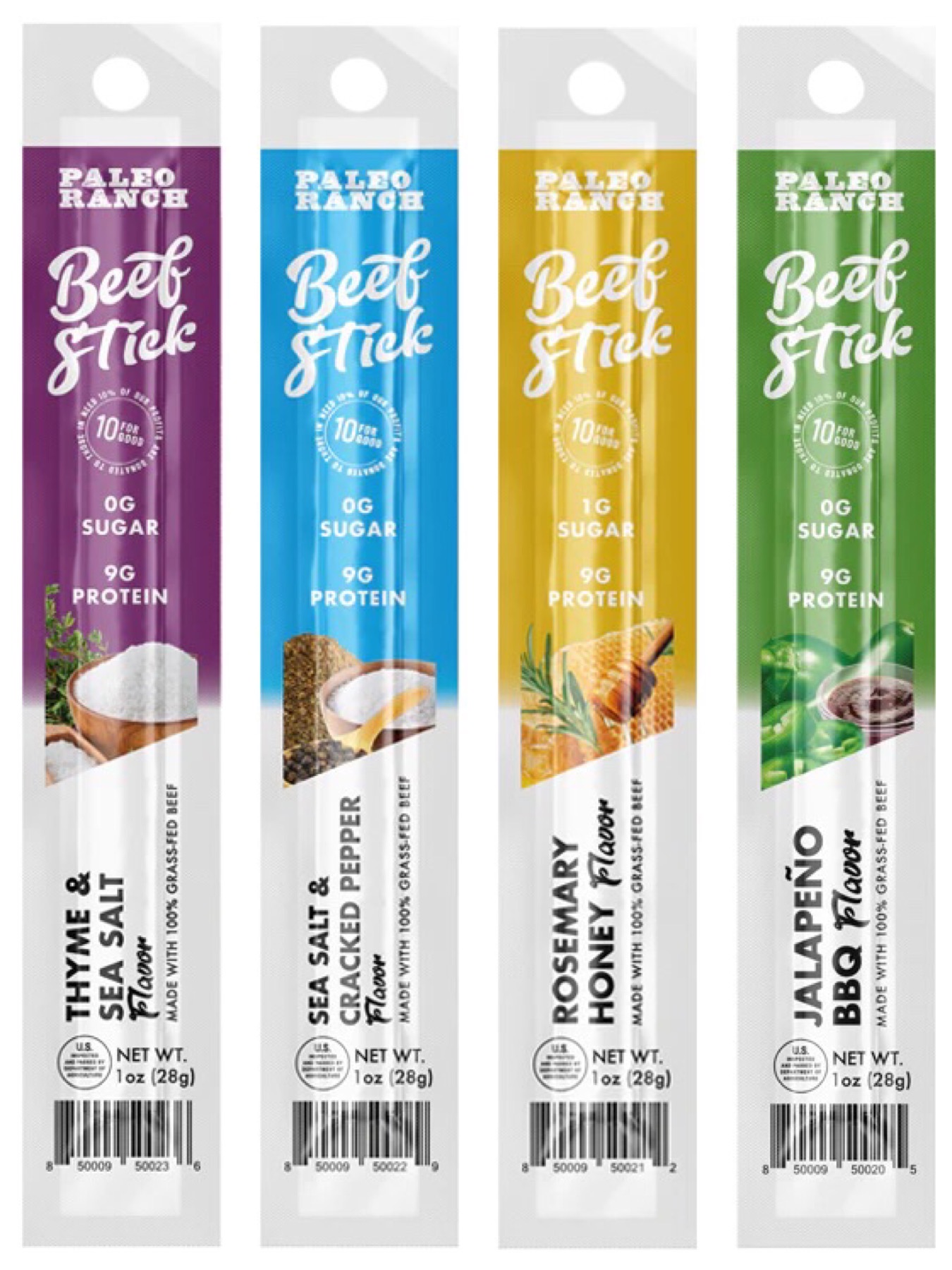 Paleo Ranch prides itself not only by sourcing 100% grass fed cows roaming freely outdoors, but also by donating 10% of its profits to a wide number of charities. Paleo Ranch’s cattle never spend time in feedlots or are administered antibiotics, growth hormones or steroids. In addition to beef sticks, they also sell beef jerky, bacon jerky, chicken bites, and protein bars. 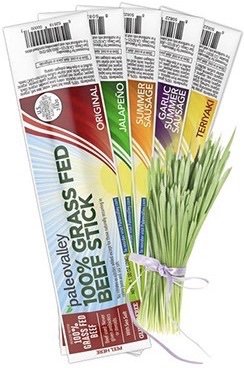 In 2007, Paleovalley co-founders Autumn and Chas Smith met, fell in love, got married, and a had a baby boy. Autumn had suffered from digestive issues since she was a teen. Multiple experts were unable to provide a solution which worked. So Chas decided to do some research of his own and discovered the paleo diet. After 30 days of the couple going paleo, Autumn was able to completely resolve her IBS. To pay it forward, she quit her job as a personal trainer and earned a master’s degree in holistic nutrition. Originally they planned to inform others about what’s truly healthy, but they found the market was lacking in any products rich in minerals, vitamins, and antioxidants. So along with Chas’ brother Matt and their good friend Matthew Sobotka, they created Paleovalley to sell products which met their own strict health standards. For their meat snacks, they have a large number of flavors of grass feed beefs sticks and couple flavors of turkey sticks. 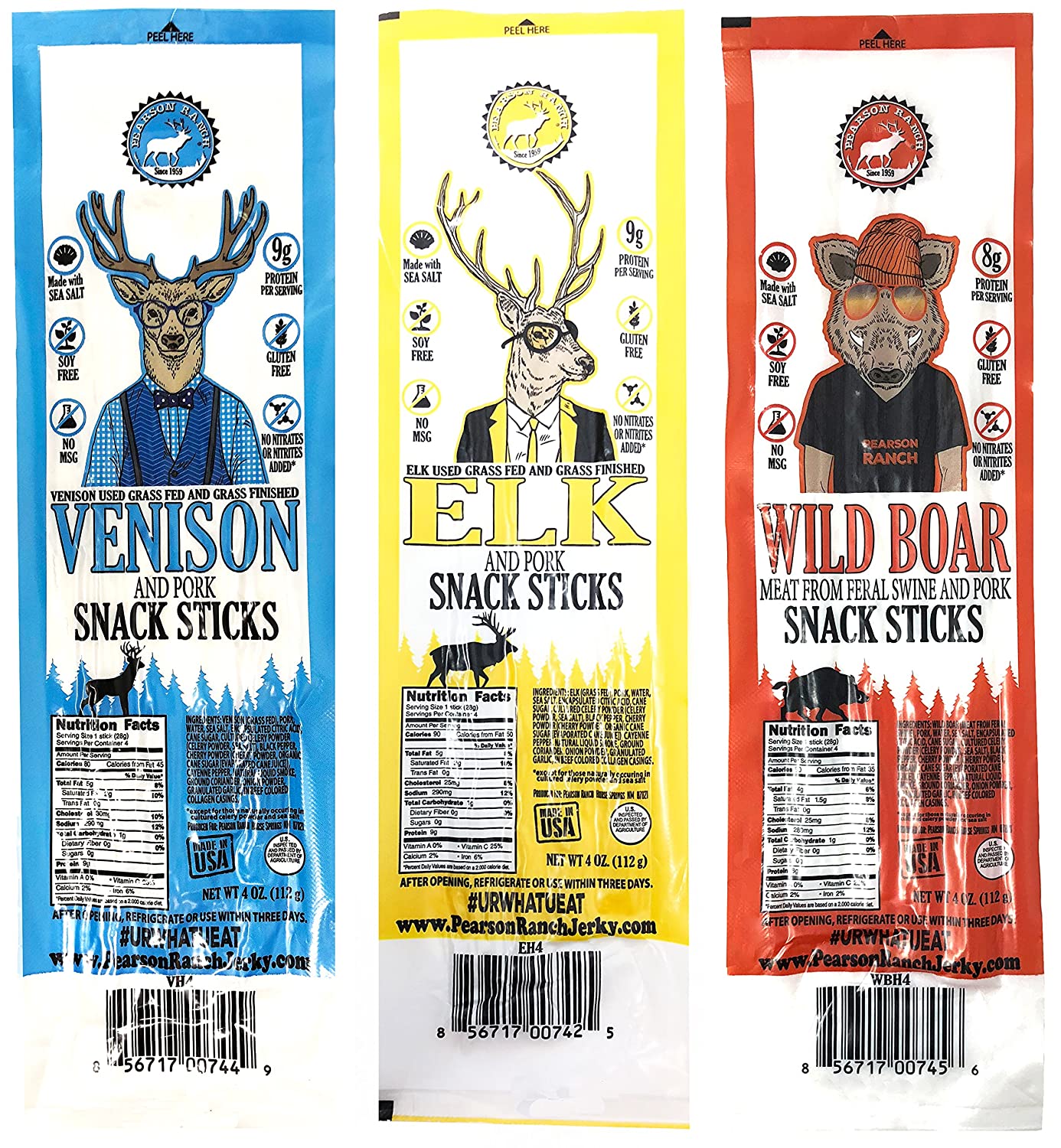 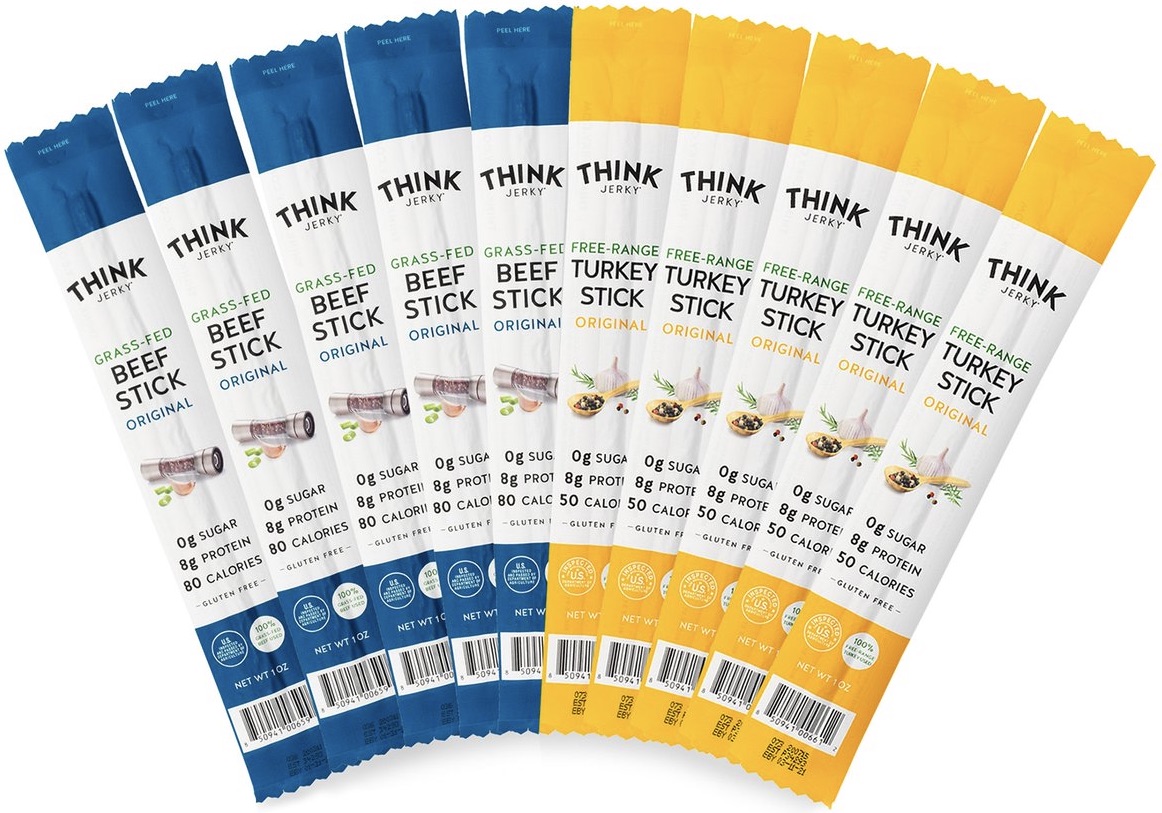 Ricky Hirsch started Think Jerky as he was shocked to find out that most of the jerky products on the market were filled with sugar. He had the goal to make jerky and meat sticks which were both healthy and tasty. To make it healthy, he used only sustainably-raised 100% grass fed beef and free range turkey without any added hormones or antibiotics plus ingredients which are non-GMO, gluten free, and paleo friendly. And to accomplish the tasty part of it, he enlisted award winning chefs to all come up with different flavors. The current chefs with Think Jerky snack stick flavors are Doug Sohn and Gale Gand. 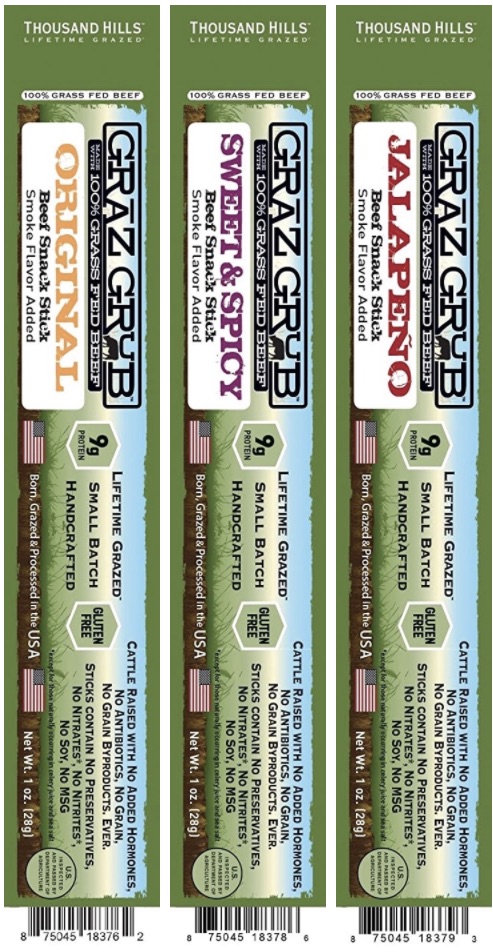 Matt Meier worked for 20 years in conventional food marketing before he returned home to the farm he grew up on. In 2003, he founded Thousand Hills with the mission of nourishing the soil, the plants, cattle, and people by holistically grazing cattle for their entire lives. His home farm in Clearwater, MN is one of the 13 Savory Institute hubs in North America as the ranch is a leader in holistic and regenerative grazing practices. Thousand Hills now sources cattle from other family farms which they’ve hand picked for their similar deep commitment to regenerate land and having nutrient rich beef as a result. The farms range from the midwest, northeast, and west regions of the United States. Already 600,000 acres of land has seen positive benefits. Beef sticks are part of a diverse amount of products which can be found from Thousand Hills, such as jerky, bone broth, chili, ground beef, hot dogs, sausages, steaks, and roasts. All of their products are now Land to Market certified regenerative. 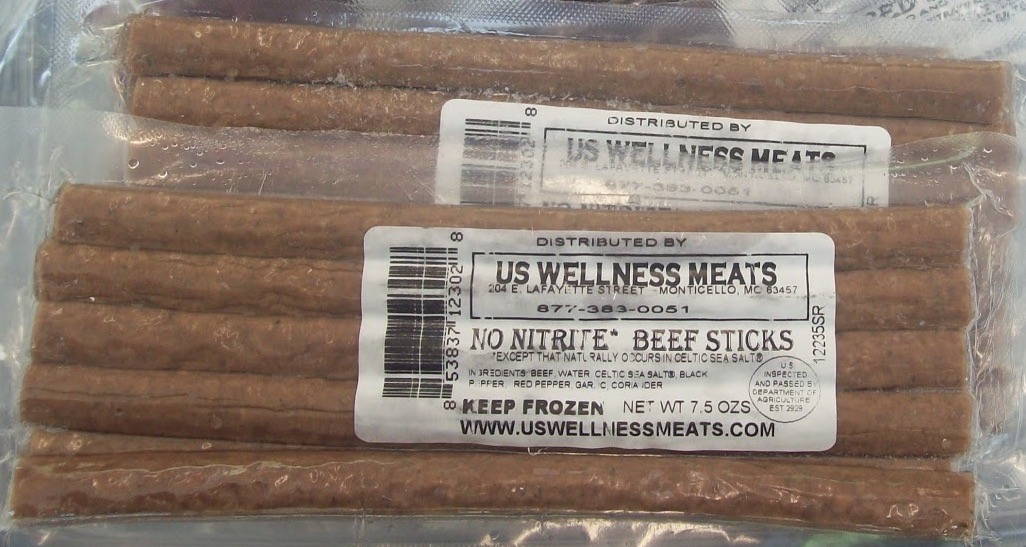 U.S. Wellness is one of the most successful online retailers in sustainable food. The business began in 2000 with working family farms in northeast Missouri and Illinois who been raising animals on the land for generations. Since then, they’ve partnered with a few other small family farms across the U.S. and their friends’ farm in Tasmania to provide all of their 100% grass fed and finished beef. U.S. Wellness gives their cattle a 30 – 45 day resting period between grazing to make the plants in the pasture more dense and grow back new native plants. Beef sticks are among their large varieties of beef, lamb, bison, pork, seafood, poultry, dairy, and even non-meat products such as nuts and chocolate.