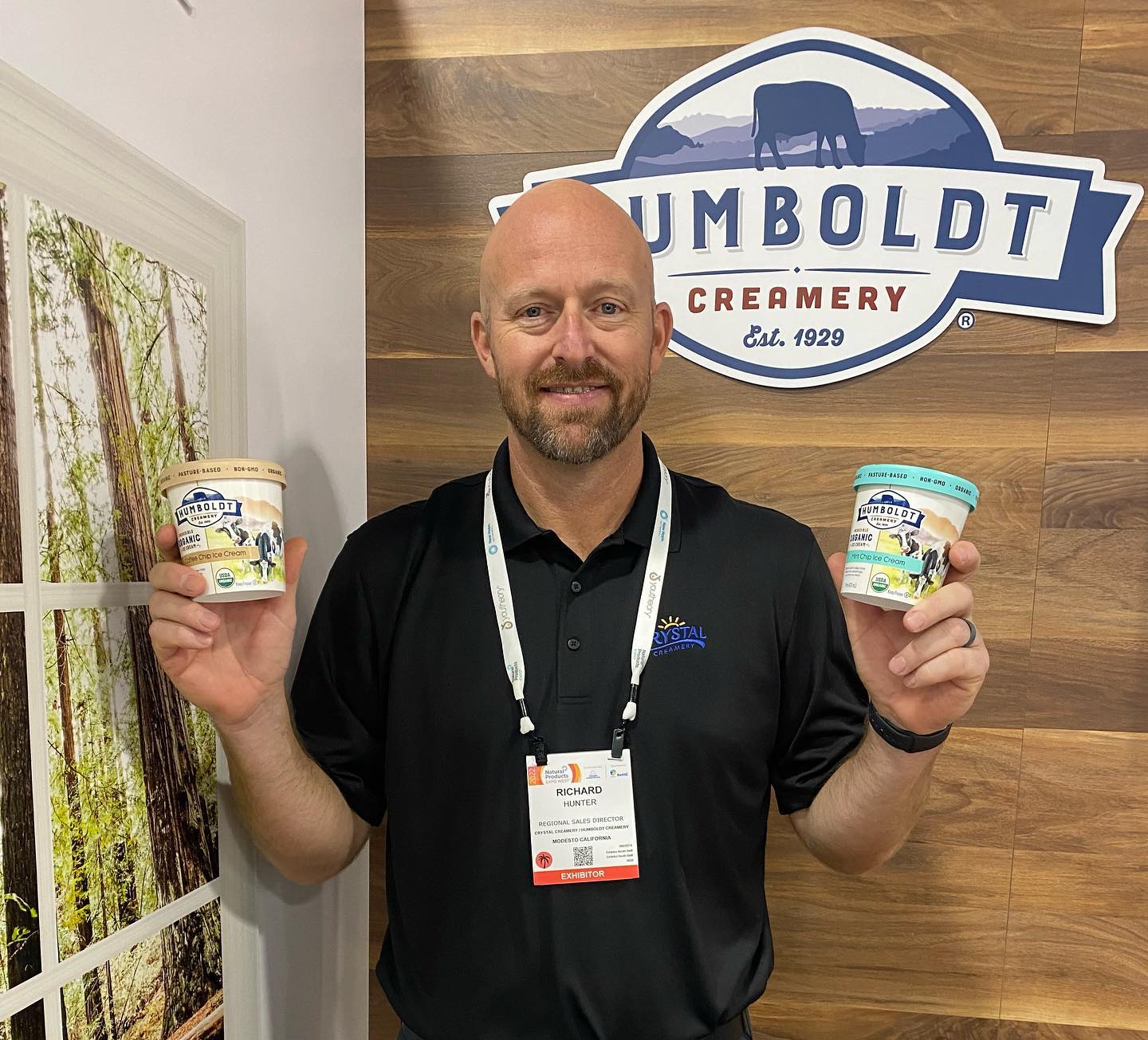 Ice cream is one of the most profitable industries. Over 1.3 billion gallons of ice cream is produced every year. Ice cream adds $13 billion dollars to the economy with 29,000 direct jobs from it and $1.8 billion in direct wages. Also, the average American consumes 20 pounds of ice cream annually.

While ice cream is a big business, only a small portion of the ice cream makers use real ingredients. The majority of ice cream uses milk which comes from factory farms and fed genetically modified corn and soy. The sweeteners used, such as beet sugar and corn syrup, also contain GMOs . Many of the ingredients are sprayed with pesticides, herbicides, and other chemicals. Conventional ice cream ingredients also consist of artificial flavors and colorings. Plus ice creams have become largely batch frozen and loaded with air, fillers, and stabilizers.

Fortunately, there are a growing number of companies churning small batch ice cream the old fashioned way with grass fed milk and cream, organic and natural ingredients, and cane sugar. I’ve loved ice cream since I was a child, so this is “cool” in more way than one. As we celebrate National Ice Cream Month, it’s important to make better choices when chillin’ with this wonderful frozen comfort food. 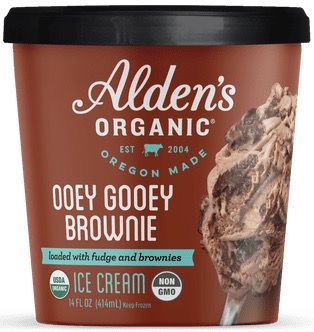 In 2004, Oregon Ice Cream launched the Alden’s Organic label. Alden’s sources its organic milk and cream from family owned farms where cows graze a minimum of 120 days and are given plenty of access to fresh air. Their milk and cream are free of hormones and antibiotics, high fructose corn syrup, artificial sweeteners and flavors, GMOS, and carrageenan. In addition to their pints and quarts of ice cream, Alden’s also has ice cream bars and ice cream sandwiches. 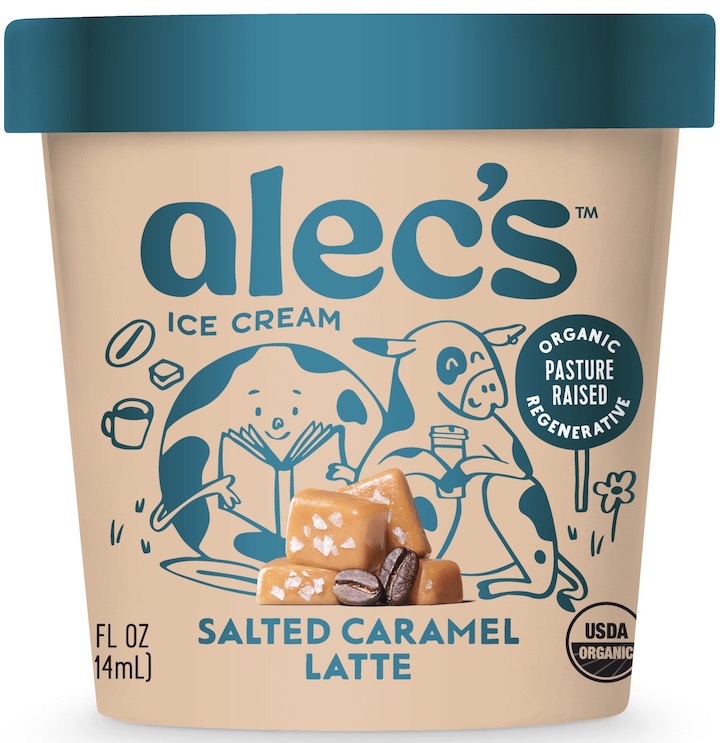 Alec Jaffe has a lifelong passion for both ice cream and sustainability. Alec learned how to make ice cream for an elementary school project. He also grew up visiting his relatives’ sustainable farms. Yet he didn’t know how these childhood moments would shape him until he was an adult and unhappy with the supermarket options for pints of ice cream. Knowing there could be better options, he perfected his ice cream making and set out to source the best ingredients. What Alec ended up with was the first regenerative organic ice cream with the name Alec’s Ice Cream. Alec’s is known for creative flavors such as honey blue lavender and salted caramel latte. 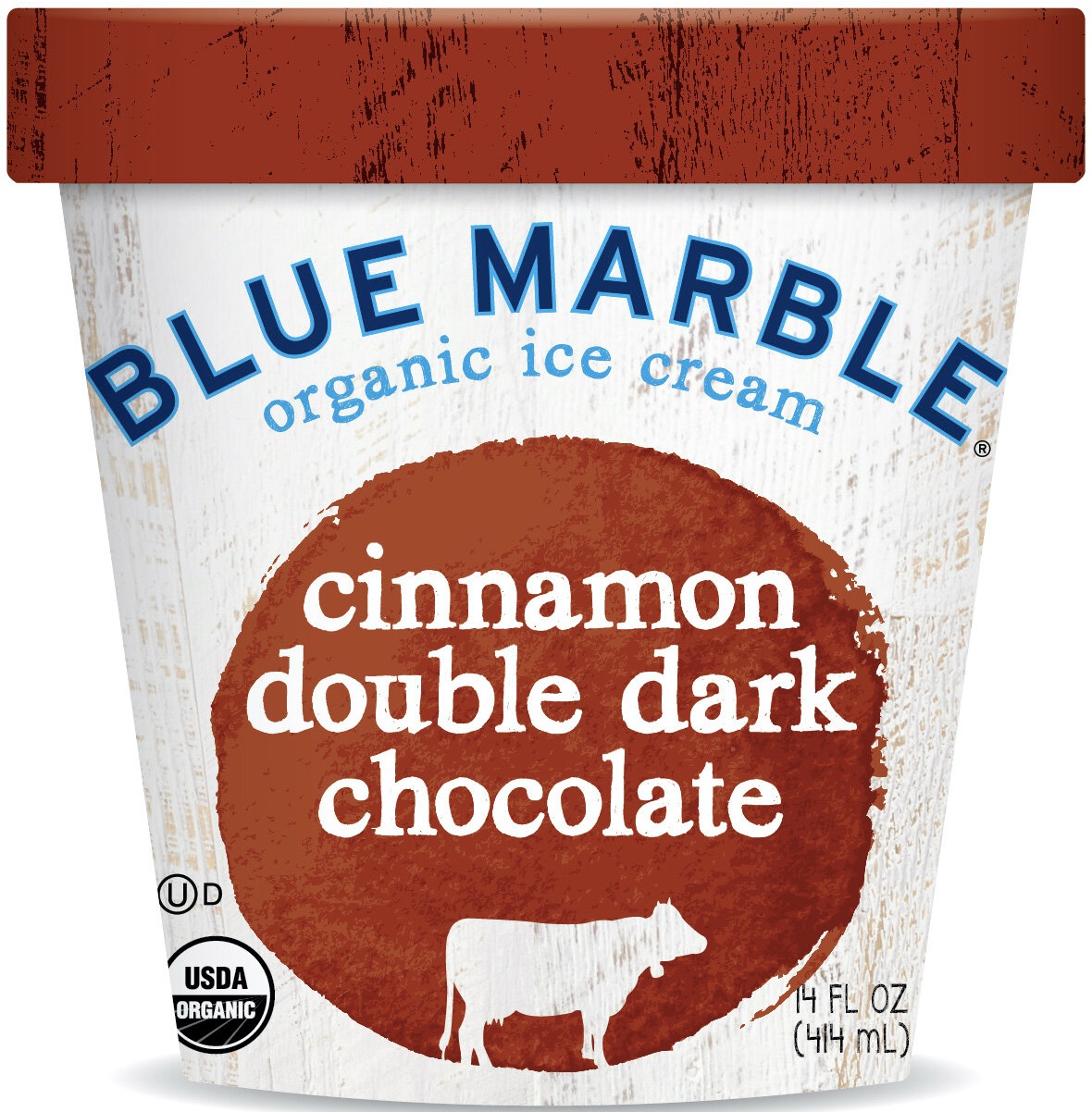 Jennie Dundas and Alexis Miesen launched the first Blue Marble Ice Cream shop in Brooklyn in 2007. Jennie and Alexis shared the goal of wanting to do something truly meaningful with ice cream. They began by using the top organic dairy and best ingredients. They thought the name Blue Marble was appropriate for their business as it’s a nickname for planet earth; representing their values, commitments, and aspirations. Blue Marble soon expanded into more ice cream shops in New York and began selling pints through retailers such as Whole Foods and Fresh Direct. A year after opening the first shop, the non-profit arm  Blue Marble Dreams was created. Blue Marble builds ice cream shops with women in areas recovering from conflict or natural disaster.  Blue Marble also has the To Make the World a Sweeter Place mission, where they pledge 1% of the sales from their scoop shops and private events to the Brotherhood Sister Sol organization. BroSis provides educational programs to the Black and Latinx youth to encourage activism for change across the country. 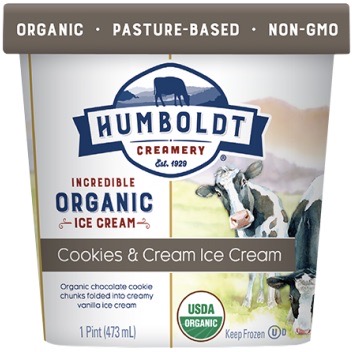 The Humboldt Creamery was founded in 1929 as a cooperative of dairy farmers. Humboldt Creamery is now part of Crystal Creamery, the largest family run dairy in Northern California. Crystal is engaged in zero waste initiatives to reduce the footprint of their manufacturing process. Over 98% of their materials have been diverted from the landfill in their Modesto production facility. At the Humboldt Creamery, the cows forage on pastures which are lush and green all year round. The cattle have plenty of space to roam as the herd sizes are about four cows per acre. The soil in the pastures remain healthy through no till holistic management and organic compost. Everything which the cows graze is non-GMO and organic. Additionally no hormones or antibiotics are used in the milk production. Along with its pints of ice cream, Humboldt Creamery is also known for its fluid milk, cream, sour cream, and cottage cheese. 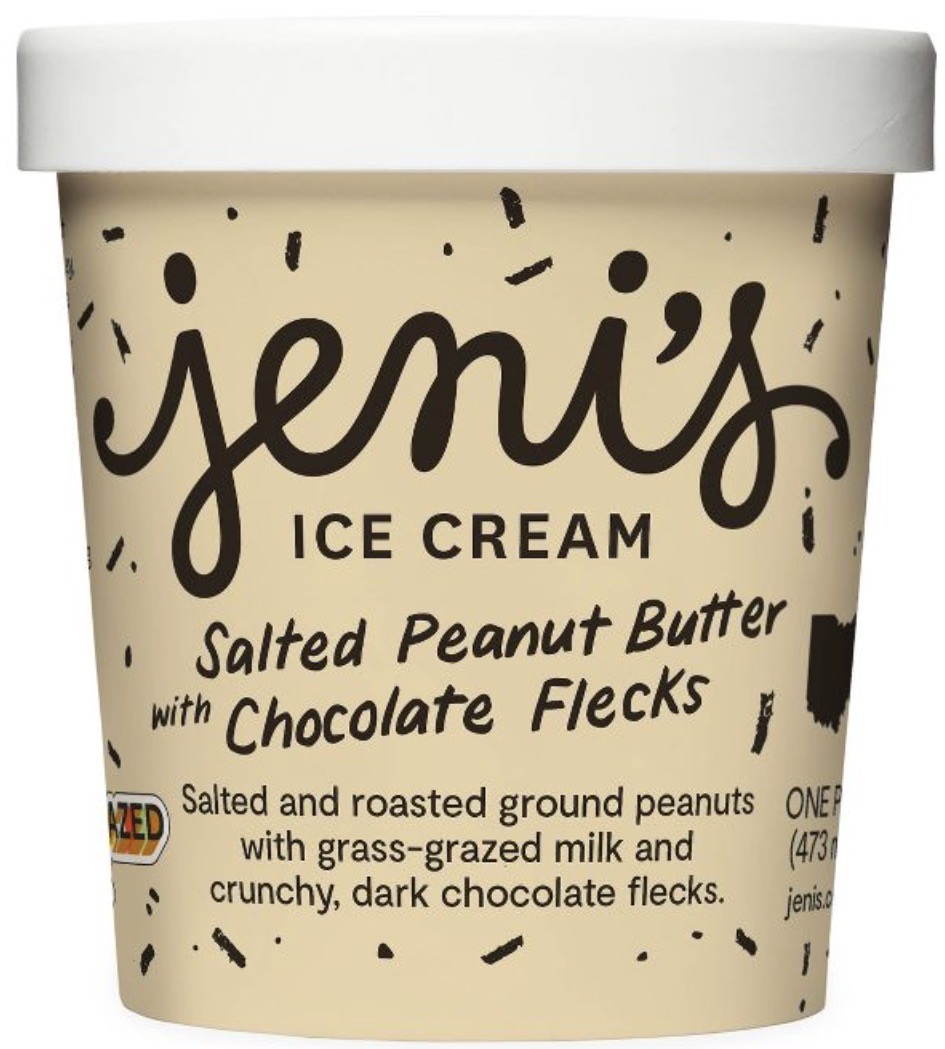 As an art and art history student, Jeni Britton first made ice cream in 1996 at the age of 22. Jeni loved blending her own oils and threw them into various foods. One day she added cayenne to her chocolate ice cream. She loved the balance of being sweet, cold, and flaming in the same product. From this point on, Jeni knew she’d be making ice cream the rest of her life. In 2002, she opened her first Jeni’s Splendid Ice Creams shop in the North Market in Columbus, OH. She now has 65 scoop shops as well as pints sold at supermarkets across the United States. Her ingredients include milk from family dairy farms, fair and direct trade chocolate, and fresh fruits and vegetables. From the beginning, Jeni’s Ice Cream has gone for unique varieties and now has ones including brambleberry crisp, watermelon taffy, and everything bagel. 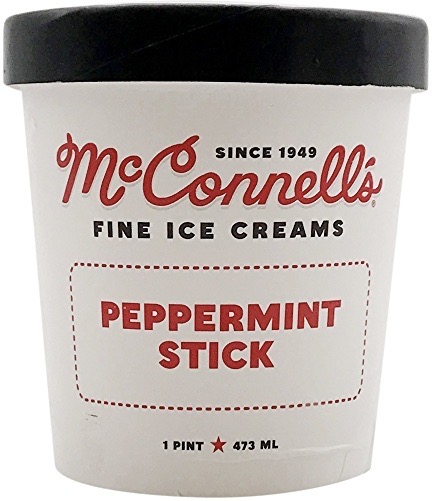 McConnell’s Fine Ice Creams was founded by Gordon “Mac” and Ernesteen McConnell after they had just moved to Santa Barbara in 1949. In the 1930s, Mac owned some of the first health food stores in the country and was looking for an idea. After having a bowl of vanilla ice cream one night, he realized how creameries had moved away from using real ingredients. Mac felt it was time to make small batch ice cream again. Mac and Ernie turned to the Central Coast farmers where they could get annual and seasonal ingredients, grass grazed milk and cream, fruits, nuts, and produce. The McConnell’s made their own jams and caramels and baked their own inclusions. In 1950, they opened their first shop. After Gordon had passed away in 1962, the company was sold to Santa Barbara local Jim McCoy. Jim and his wife Jeney expanded the business into Southern California. In 2012, husband and wife Michael Palmer and Eva Ein became the third generation to own McConnell’s. Their ice cream is now sold in supermarkets across the United States.  Some of the current limited release flavors of McConnell’s are salted pretzel crunch, vanilla grapefruit, and Earl Grey tea & shortbread cookies. 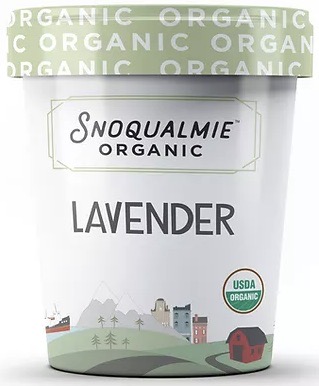 In 1997, Barry and Shahnaz Bettinger fulfilled their dream of working together when they purchased Snoqualmie Ice Cream. Their plan was to create the world’s smoothest, richest and most perfect ice cream and out of Maltby, WA. Being environmental and using high quality products was always important to Barry from seeing his father run a sustainable farm to running a large dairy plant in New York. Snoqualmie’s organic ice creams are French-style frozen custards with extra cream, lots of eggs and very little air, creating a rich and velvety treat. They source simple ingredients from the Pacific Northwest, including USDA Organic-certified grass-fed milk and cream, eggs, and berries. Their plant is also sustainable with its use of solar panels, rain gardens, LED sensor lighting, and energy efficient equipment. Snoqualmie has two scoop shops in Washington state and a wide selection of ice cream flavors. 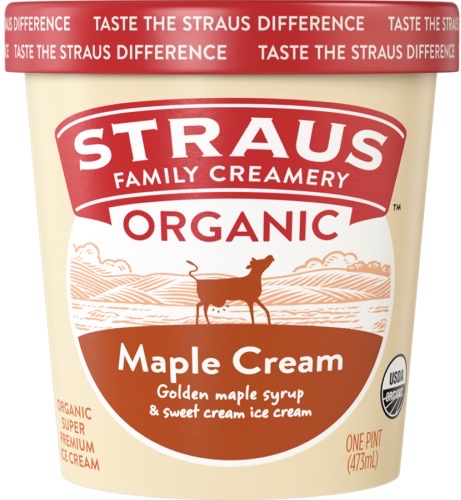 The story of Straus Family Creamery originates with the farm founder/CEO Albert Straus grew up on. Albert’s father Bill started his dairy farm in the early 1940s in Marshall on the shores of Tomales Bay. Bill’s wife Ellen joined him in 1950. The couple began with a small farm of 23 cows. Albert was the oldest of four children. By the time all of the children had become adults, dairy farms were becoming larger and more industrial while the number of small dairy farms was declining. In the 1970s, Albert took over the farm and introduced bold solutions to keep family farming going and to maintain the land these farms were on. Some of these new practices were no longer using herbicides and chemical fertilizers, switching to no till planting, and a manure water pond system. But the biggest step Albert took was having the farm become organic and founding Straus Family Creamery to have the first 100% certified organic creamery. The certified organic milk is non-homogenized and bottled in recyclable glass. Ice cream is one of many dairy products which Straus offers. Other products are fluid milk, cream, sour cream, butter, and yogurt. 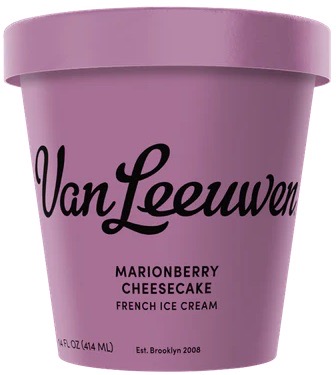 Van Leeuwen Ice Cream was first served by Ben and Pete Van Leeuwen and Laura O’Neill in a yellow food truck on the streets of New York City in 2008 with a mission to serve “good ice cream that makes you feel good”. A major part of being good was knowing that the ingredients in their ice cream were simple and clean. Van Leeuwen says “If it’s tough to pronounce, it’s probably tough to digest”. They also saw mental health and being happy as important as physical health. And using the real ingredients of milk, cream, eggs, and cane sugar for ice cream sounded like the key to happiness. Van Leeuwen currently has ice cream shops in five different states and will soon be opening locations in two more states. Their pints of ice cream and ice cream bars are also available at supermarkets across the country.