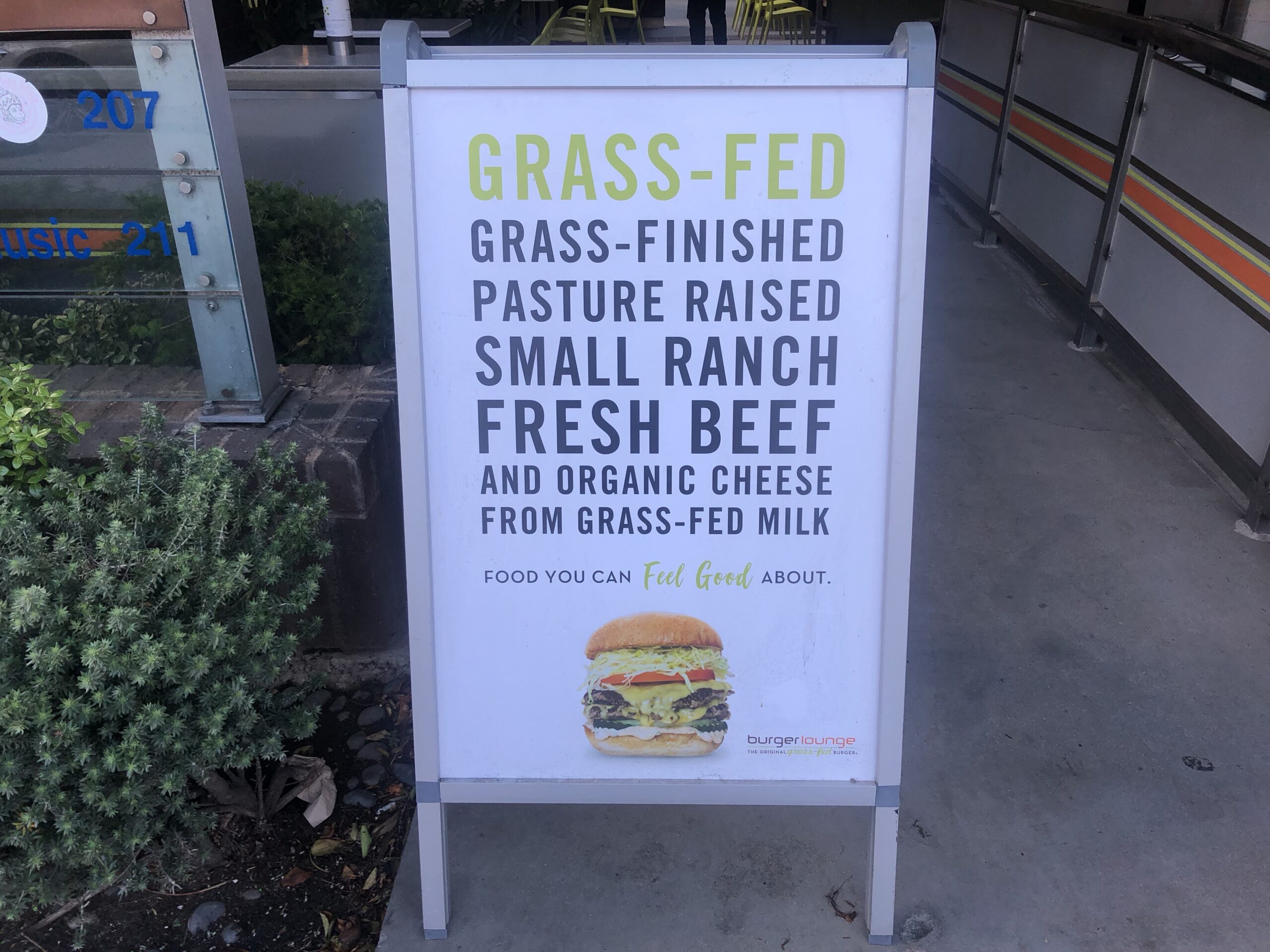 To foodies, especially burger lovers, May is known as National Hamburger Month. While more people understand the concept of grass fed beef, unfortunately the USDA requirements for a grass fed label simply mean the animal was fed grass one day. So now ranchers are using the term “100% grass fed”. All of the entries on this list both use meat from farms I’m familiar and meat which is indeed 100% grass fed.

In alphabetical order, here are the 9 best grass fed burgers in Los Angeles: 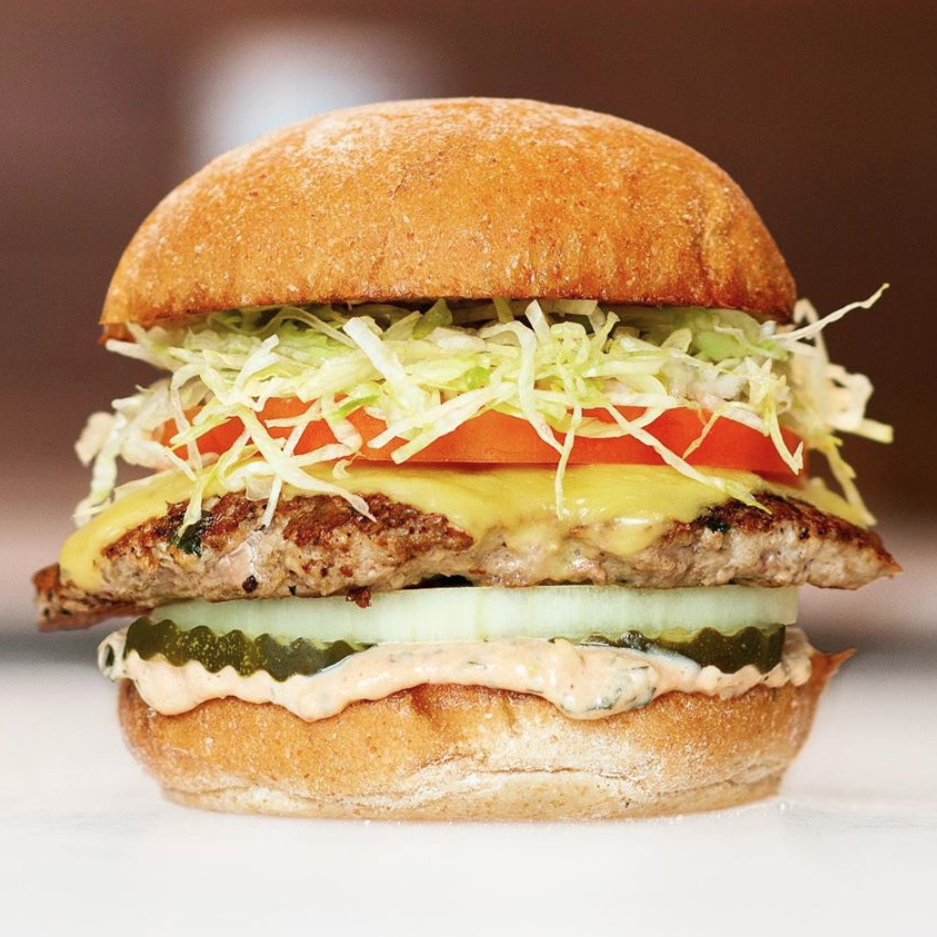 Originating in San Diego, the Burger Lounge has been popping up all over Los Angeles in the past decade and more recently have opened restaurants in Orange County, the Inland Empire, northern California and Las Vegas. Their beef is sourced from Grass Run Farms in the Midwest. If you get cheese in your burger, it’s pasture raised cheese from Rumiano, which is based in California. Burger Lounge works hard to also get all of their other ingredients from sustainable sources. The hamburger buns are baked with organic wheat. The 1000 island dressing for the burgers is made from scratch. Their french fries are cooked in a peanut oil, which gets converted into biofuel to be used in everything from delivery trucks to buses. Burger Lounge is even sustainable in terms of recyclable to-go packing, composting leftover food, and using table tops made from recycled water bottles. 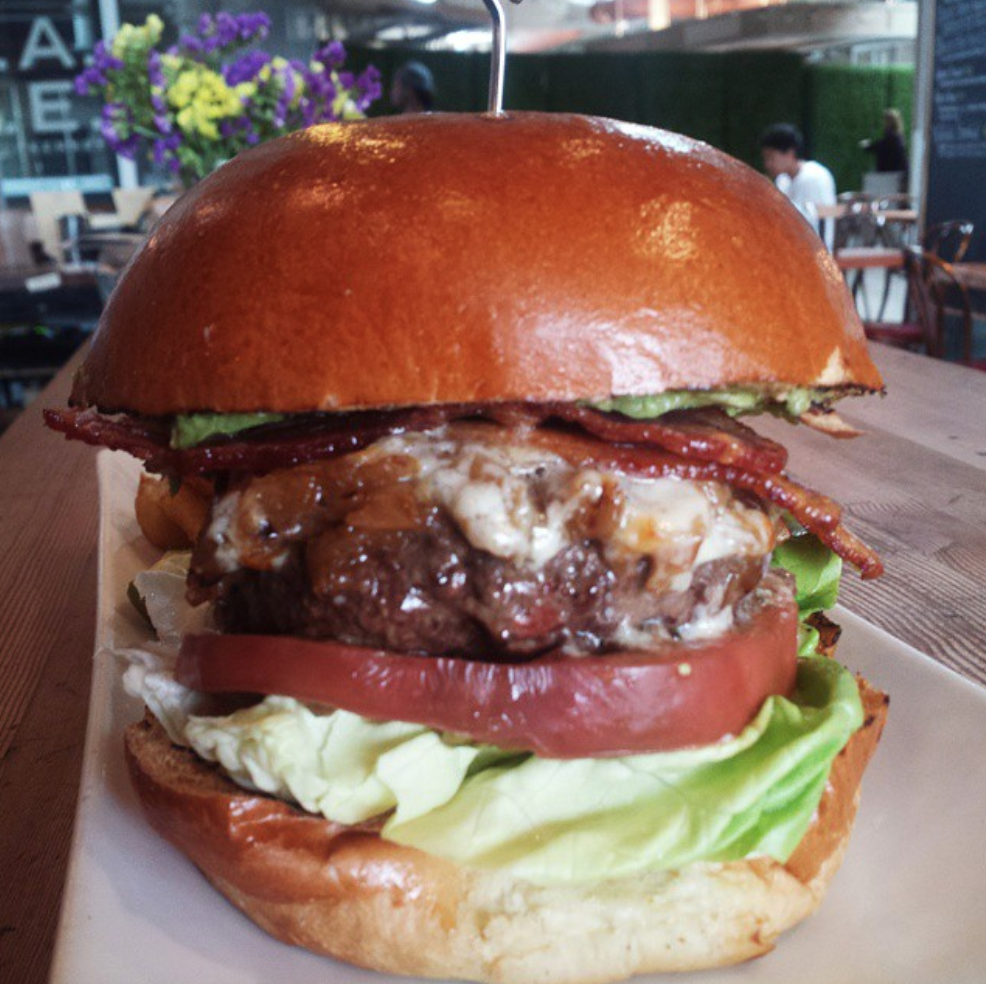 The Curious Palate co-founders Elliot Rubin and Mark Cannon had come from different walks of life when they launched the restaurant. Rubin was an engineer and Cannon was a television producer. Just as they came from diverse backgrounds, the plan was to also offer a menu with a diverse variety of foods found all over the world. In addition to a large menu, sustainability is an important part of The Curious Palate. Their produce is sourced from local farmers markets. Their grass fed beef comes mainly from Sun Fed Ranch with a part of it coming from Painted Hills Natural Beef. The Curious Palate has several types of burgers with toppings using worldly cuisines from California to Greece to Japan. 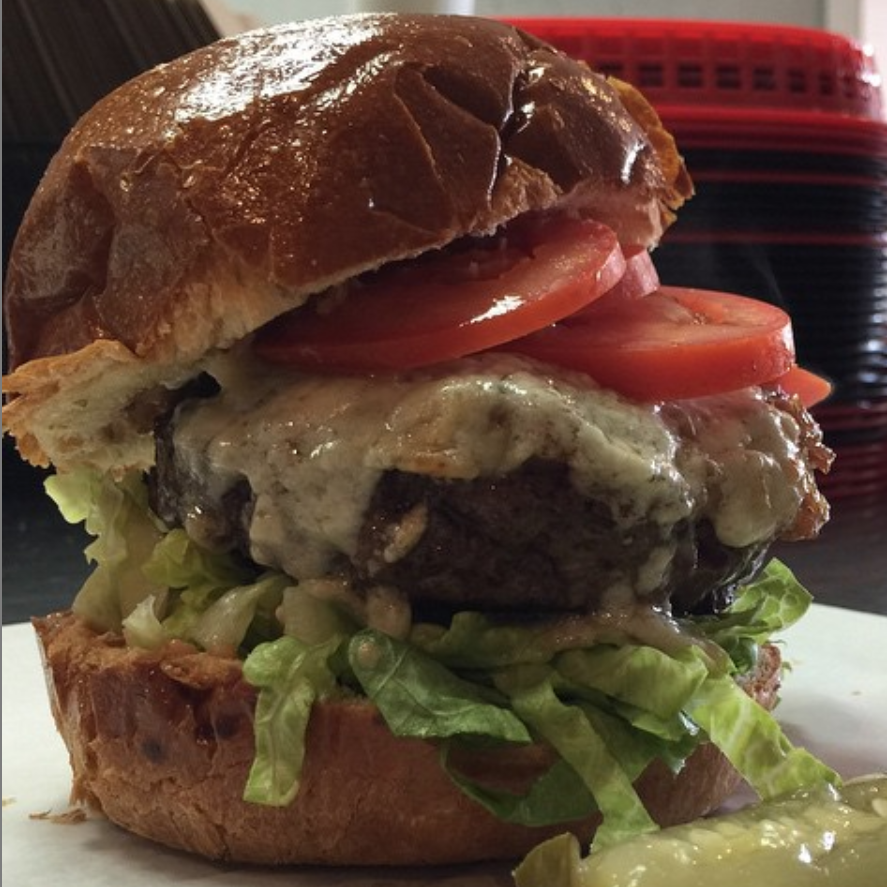 Acclaimed chef Eddy Shin founded A Cut Above after having spent over 20 years working at high end restaurants. For five years, he was executive chef at Primitivo Wine Bistro. Prior to that, he gained his fame at Nick & Stef’s Steakhouse in downtown LA, working for Chef Joachim Splichal of The Patina Group. Shin’s resume also includes his time at Fleisher’s Grass-Fed & Organic Meats in Kingston, NY. Additionally, he was featured on the History series Modern Marvels in an episode titled “The Butcher”, where he gave expertise on dry aging. At his current A Cut Above butchery, he sells beef from Novy Ranches in Mount Shasta. A Cut Above has a diverse menu of sandwiches and salads. Among these items is a grass fed burger made from a blend of short rib, ribeye, and brisket, topped with caramelized onions, blue cheese, and a fresh Russian dressing, and served on a brioche bun. 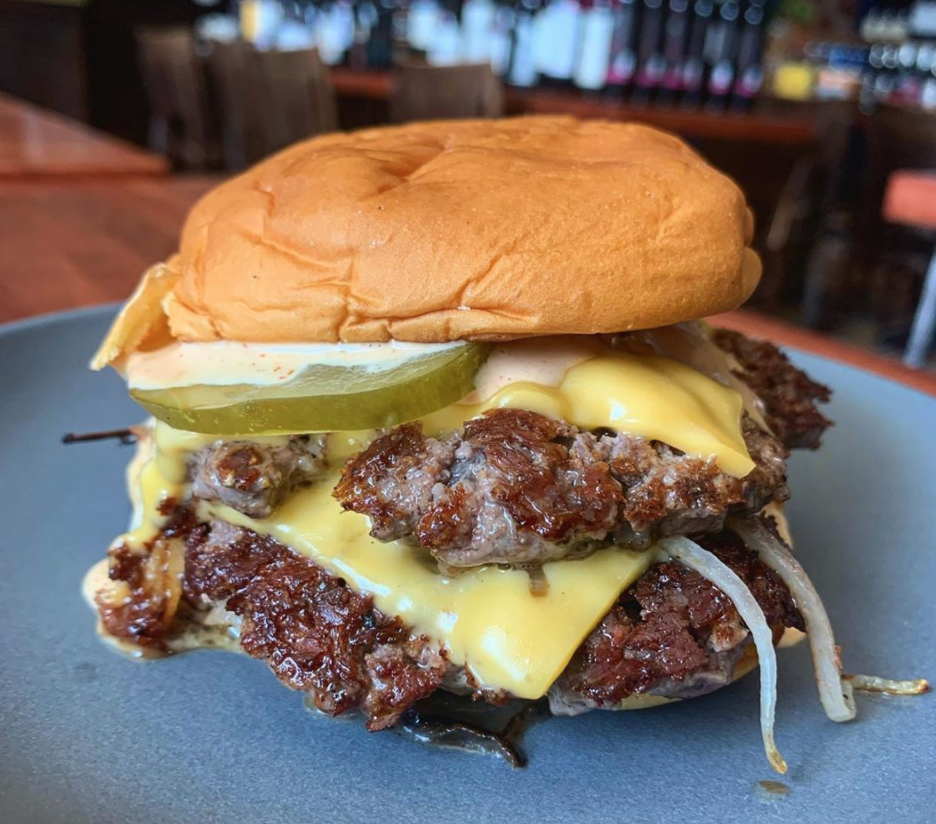 The restaurant Papilles Bistro had always wanted to do a lunch based around burgers and fried chicken. When the COVID-19 lockdown began in March 2020, they had to change their concept to survive and felt this was the best time to introduce their new menu. So For the Win was born. They took the time come up with the right tasting burger, starting with the idea in mind of a classic smash burger on a soft bun.  Many different ground beef blends, buns, sauce recipes, and condiments were tried until the combination felt just right. Their beef is sourced from Strauss, a company which partners with family farms to produced meat which is sustainable and humanely raised. 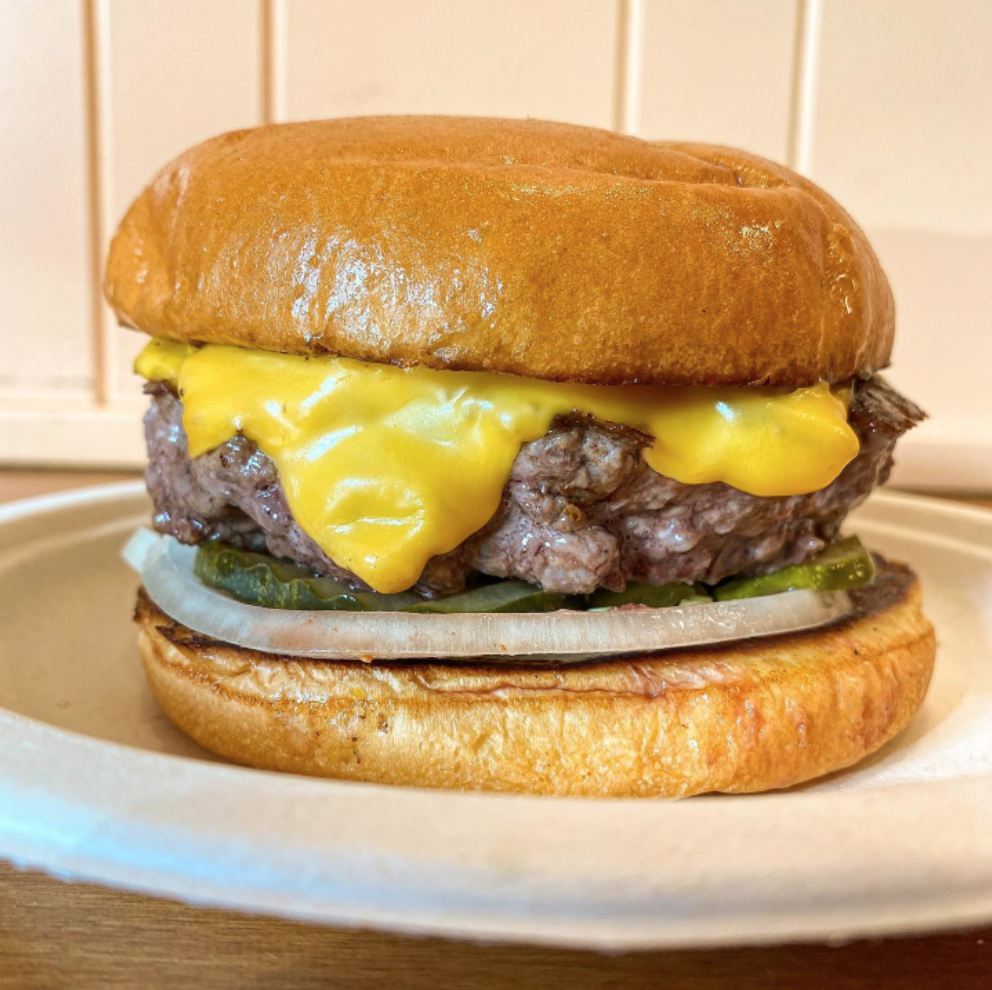 The origins of Goldburger began as an Instagram account about founder Allen Yelen’s favorite burgers and then turned into a burger pop-up all around Los Angeles. In October 2018, they opened a long running pop-up on a Silverlake patio. This lasted until restaurants were shut down on the March 15, 2020 due to the pandemic. On their last day at this location, they served a constant line until they sold out. Goldburger launched a pop-up in Highland Park two months later and ended up turning into their first brick and mortar. A year after, they built a second location in Los Feliz. Their grass fed beef is provided by Grass Run Farms. Goldburger also has Swell Soda on their menu. This soda is microbrewed and hand bottled in San Diego and uses real cane sugar. 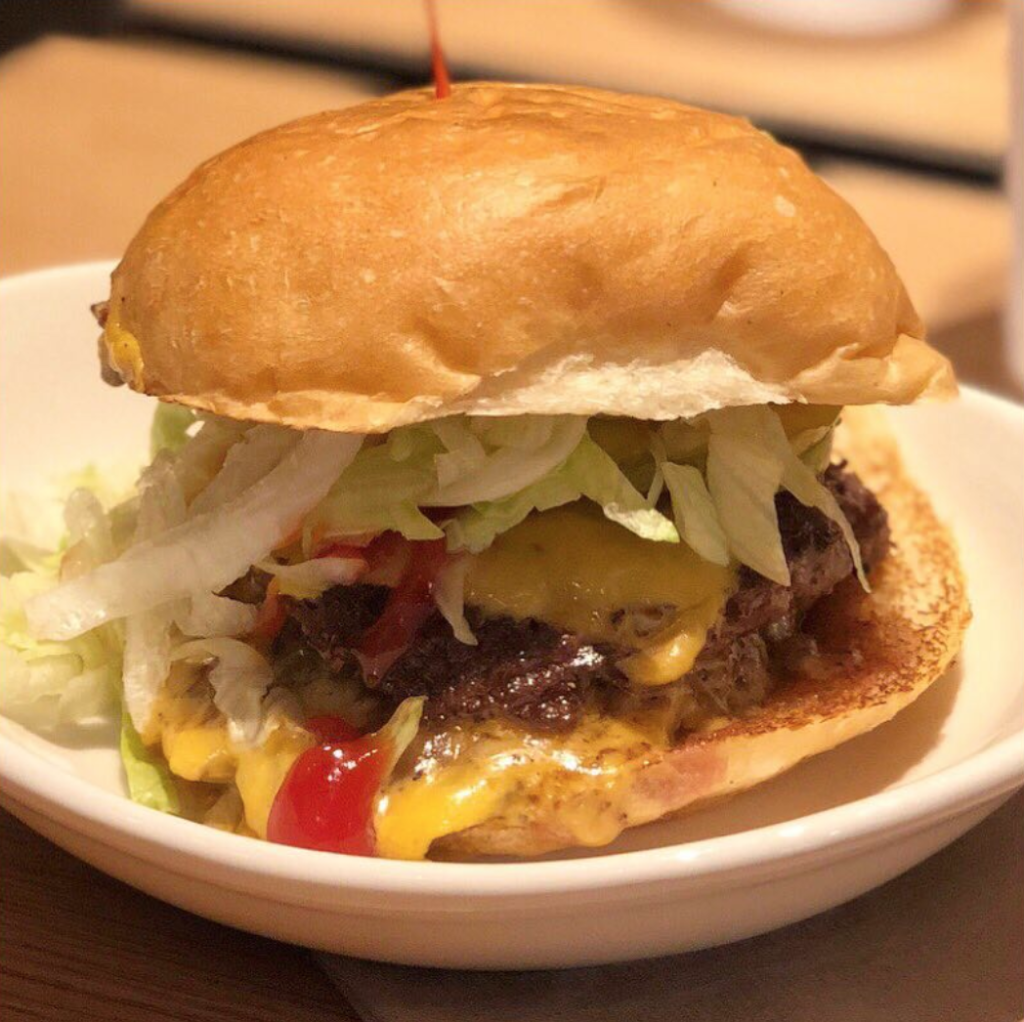 HiHo Cheeseburger is making a giant splash not only in the sustainable food world, but in the burger world overall. The eatery has won Los Angeles Magazine‘s annual Burger Bracket two years in a row. Last year, it was also awarded the people’s choice at the burger battle in the Los Angeles Times Food Bowl. Their beef comes from First Light Farms, which is a collective of 61 farmers in New Zealand raising wagyu cattle. HiHo’s burgers also contain organic lettuce and ketchup free of high fructose corn syrup. 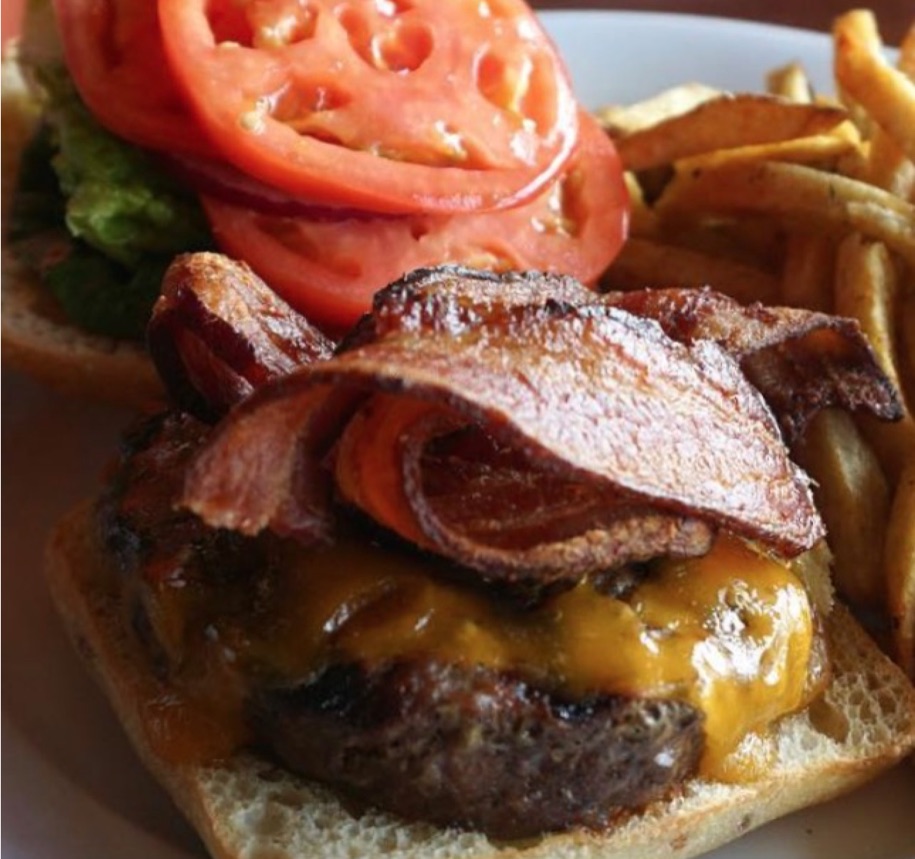 Terry Kaplan founded Hugo’s Restaurant with the vision of “a kitchen producing original, wonderful foods found nowhere else”. He describes the restaurants as “real food made in real ways”. They prepare the meals the way they’d feed their own families. Hugo’s sees that the principle of sustainability relies upon meeting the needs of the present without compromising the ability of future generations to meet their own needs.  Their dishes are made to order from scratch using organic, non-GMO, and sustainable ingredients. Hugo’s has a large menu providing different items for breakfast, lunch, and dinner. Among their lunch items is their burger using beef from Grass Run Farms, a collaboration of family farms producing 100% grass fed beef. 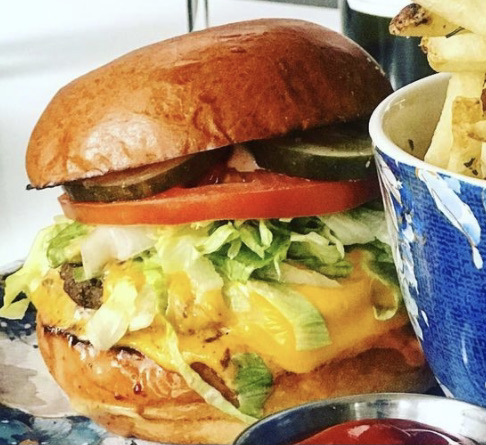 Lady Byrd Cafe is a small neighborhood cafe in the Echo Park community. The restaurant is somewhat hidden as it’s surrounded by houses. Lady Byrd’s commitment to sustainability, isn’t limited to just it’s food. Its outdoor dining is filled with plants, flowers, and small greenhouses where people can privately dine. It also has two large open-air patios along with seating inside. Founder Misty Mansouri was inspired by European al fresco dining and the Amsterdam restaurant Mediamatic, which placed greenhouse for outdoor dining last year. As for Lady Byrd’s burgers, the beef they use is Grass Run Farms. 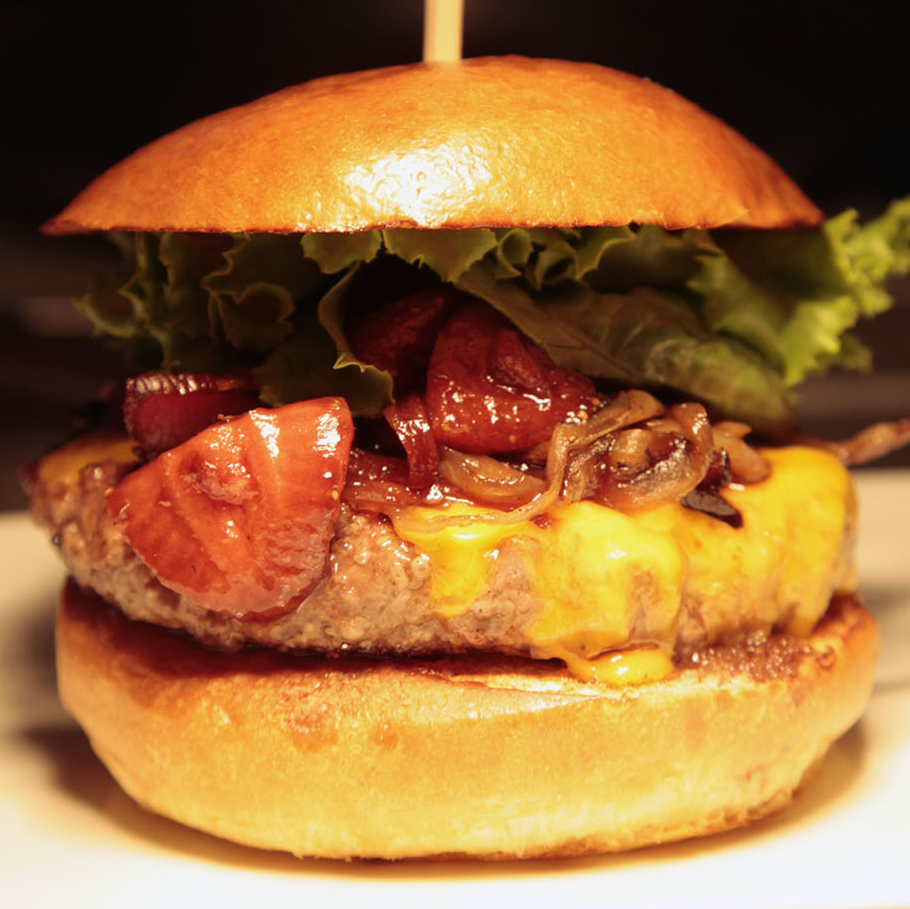 The word “pono’ is Hawaiian for “to do things the right way”. This fits well with Pono Burger‘s practices as they source their ingredients from local farmers markets and organic and sustainable farms. Their beef, in particular, comes from Eel River, which is located in Humboldt Country and part of the business collective Humboldt Made. They offer a variety of burgers, including a spicy burger, one with fig jam and brie, a burger with Niman Ranch bacon, onion rings, and BBQ sauce Pono makes themselves, one with truffle oil, mushrooms, and kale, and also the option to build your own burger.