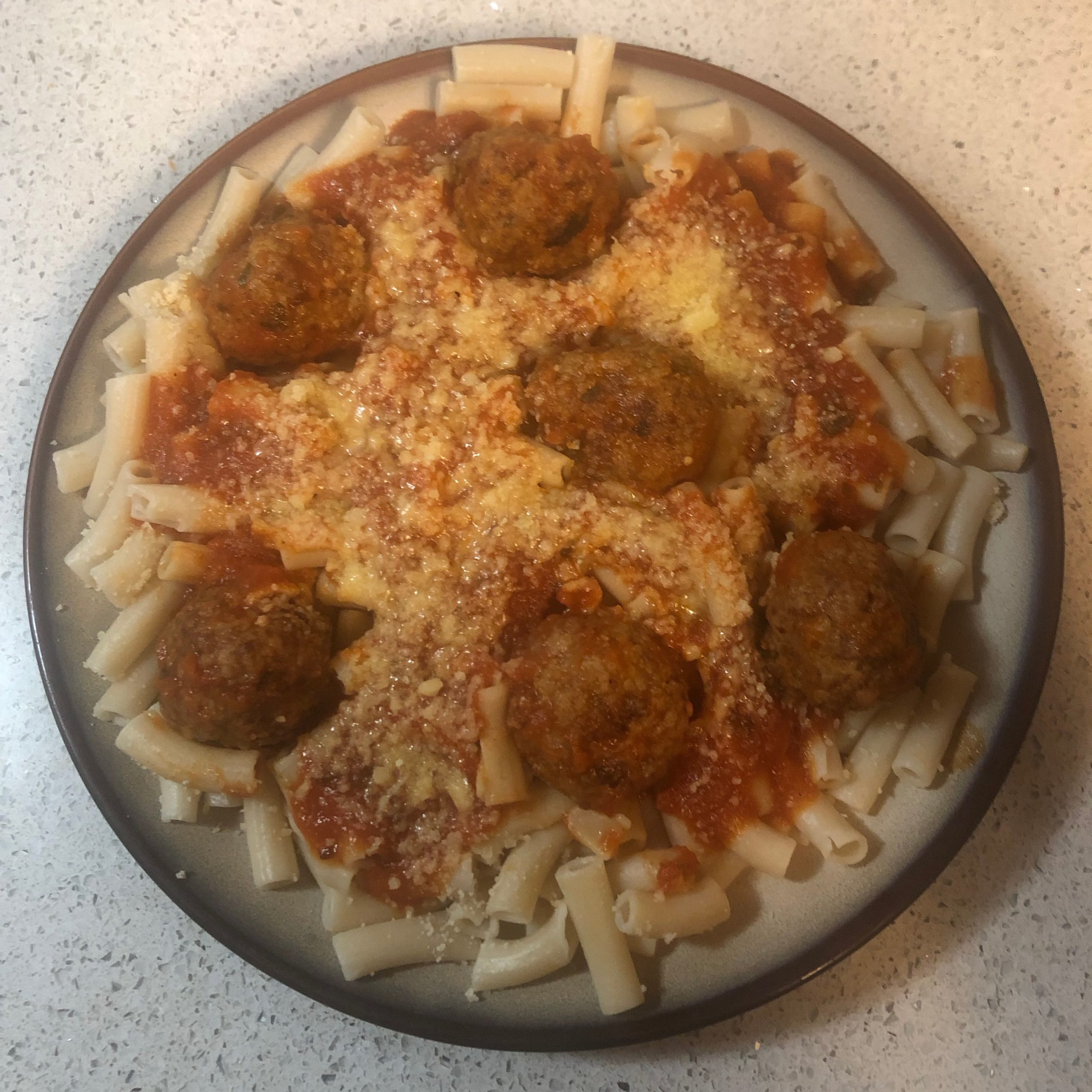 March 9 is known as National Meatball Day. The origins of why it’s celebrated on this specific date are unknown, but it’s no mystery that everybody loves meatballs. And meatballs are popular in many different cultures. They were believed to be invented by the Chinese in the 2nd Century B.C. Swedish meatballs are a popular type. And Italian-American created the combination of spaghetti and meatballs.

As the sustainable food scene is ever expanding, there are now even prepared nutrient dense meals for those with busy lifestyles. One of the most popular products from these healthy prepared food companies is meatballs.

While looking for the best grass fed meatballs, I have a few different requirements. It’s important that the brands aren’t simply using grass fed beef or pastured pork or turkey, but are sourcing from farms committed to regenerative agriculture. Also, if the food manufacturers are cooking the meatballs in marinara sauce, the sauce must be free of any rancid oils such as soybean or canola. And finally, I like to find ones which are available all over the United States. 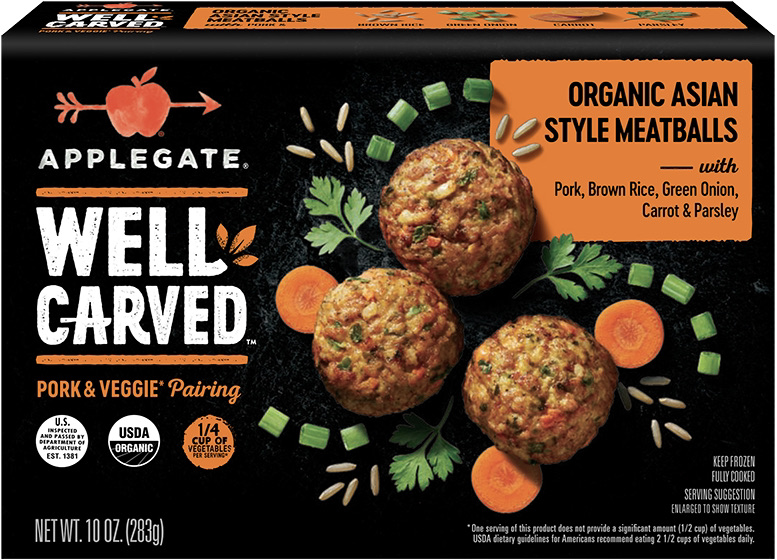 In 1987, Stephen McDonnell and his friend Christopher Ely bought Chris’ family business Jugtown Smokehouse, which produced smoked meats without any synthetic nitrates. Stephen started Applegate with the purpose of asking “what if you weren’t afraid to read a hot dog ingredient label?” Next they made deli meat which was antibiotic free, followed by introducing the first widely distributed deli meat with an organic certification. In 2015, all of their beef products became 100% grass fed. Their meatballs are among their most recent grass fed beef additions. Applegate has two different varieties, both of which mix meat and veggies. The Asian style meatballs combine pork with brown rice, green onions, carrots, and parsley. And the Mediterranean style meatballs have turkey mixed with lentils, feta cheese, and spinach. 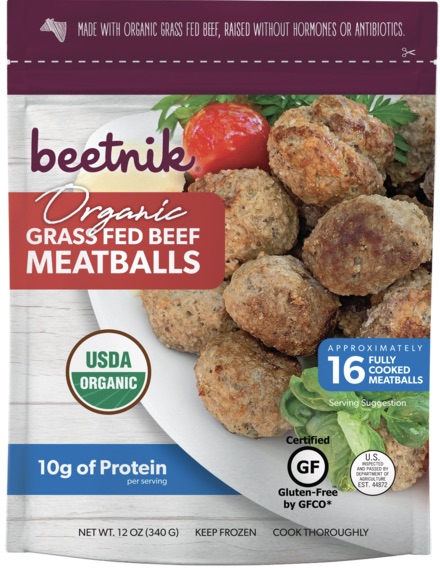 Beetnik is an Austin based business working with certified organic beef, chicken, vegetable, and herb farmers to make healthy frozen meals. They get their beef from ranchers whose cattle roam on open ranges their entire lives and are never fed corn. The company also works with a series of dieticians to advise them on making organic convenient foods. Beetnik now provides over 10 different meal options that get as diverse as lemongrass chicken to chili and sweet potatoes. And they have both grass fed beef and organic chicken meatballs. They sell packages of frozen meatballs and frozen meals of meatballs in marinara sauce with carrots and zucchini. The meatballs are all gluten free. The ones in the packages use a combination of organic white and brown rice flour while the meals are certified paleo being made with organic almond flour. 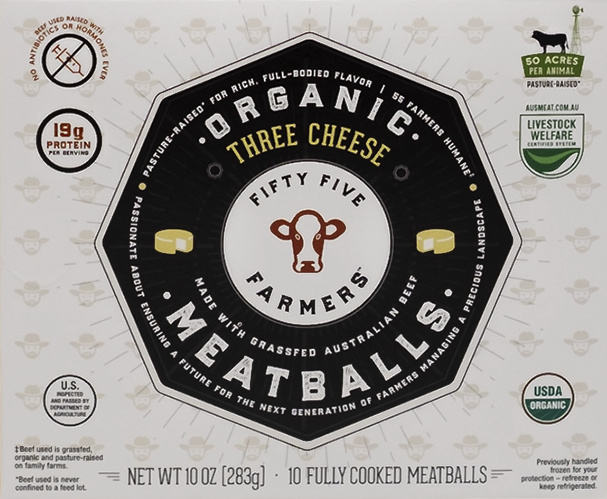 Like the company’s name implies, Fifty Five Farmers consists of 55 farmers in Australia who are devoted organic farming practices to raise grass fed beef. They’re committed to restoring the soil health by the means of grazing, organic composts, native grass species, and rest. The cattle at Fifty Five Farmers cell-graze in order to restore the grasslands into healthy areas thriving in biodiversity. The ranchers also don’t use any chemicals on the animals or the land at any of their farms. Fifty Five Farmers has three different flavors of meatballs, which are a Sicilian spice using red chili pepper, roasted garlic, and a three cheese consisting of romano, paremesan, and asiago. 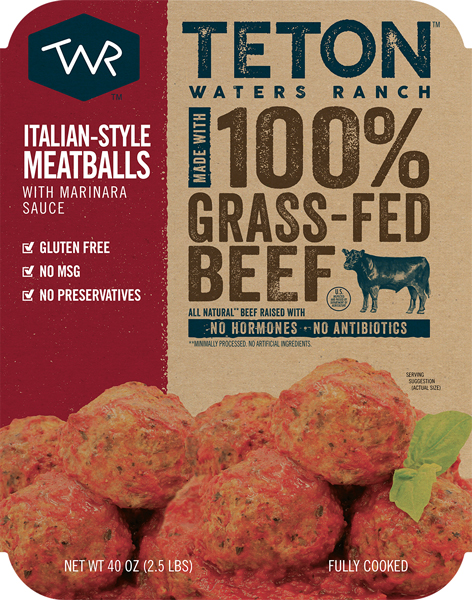 Beginning out as an experiment in environmental conservation, Teton Waters Ranch discovered how they can replenish the abused soil of an old potato farm by the means of planting native grasses, cattle rotation, and the livestock fertilizing where they eat. These practices led to a system of food which is both sustainable and healthy. They ended up forming a company which produced hot dogs and sausages coming from grass fed and finished beef. They’ve since partnered with the Savory Institute, a worldwide nonprofit with the goal of restoring grasslands using holistic management. Teton Water has also recently expanded their product line into ground beef, starting with frozen burger patties and now meatballs. Their meatballs are cooked in marinara sauce and use white and brown rice flour to make them gluten free.

U.S. Wellness is one of the most successful online retailers in sustainable food. The business began in 2000 with working family farms in northeast Missouri and Illinois who been raising animals on the land for generations. Since then, they’ve partnered with a few other small family farms across the U.S. and their friends’ farm in Tasmania to provide all of their 100% grass fed and finished beef. U.S. Wellness gives their cattle a 30 – 45 day resting period between grazing to make the plants in the pasture more dense and grow back new native plants. U.S. Wellness has meatballs made from 100% grass fed beef and seasoned with adobo as well as ones made from their heirloom pork. Meatballs are among their large varieties of beef, lamb, bison, pork, seafood, poultry, dairy, and even non-meat products such as nuts and chocolate. U.S. Wellness’ main model is the Internet, but they also have a select number of physical retailers across the U.S. which carry some of their products.