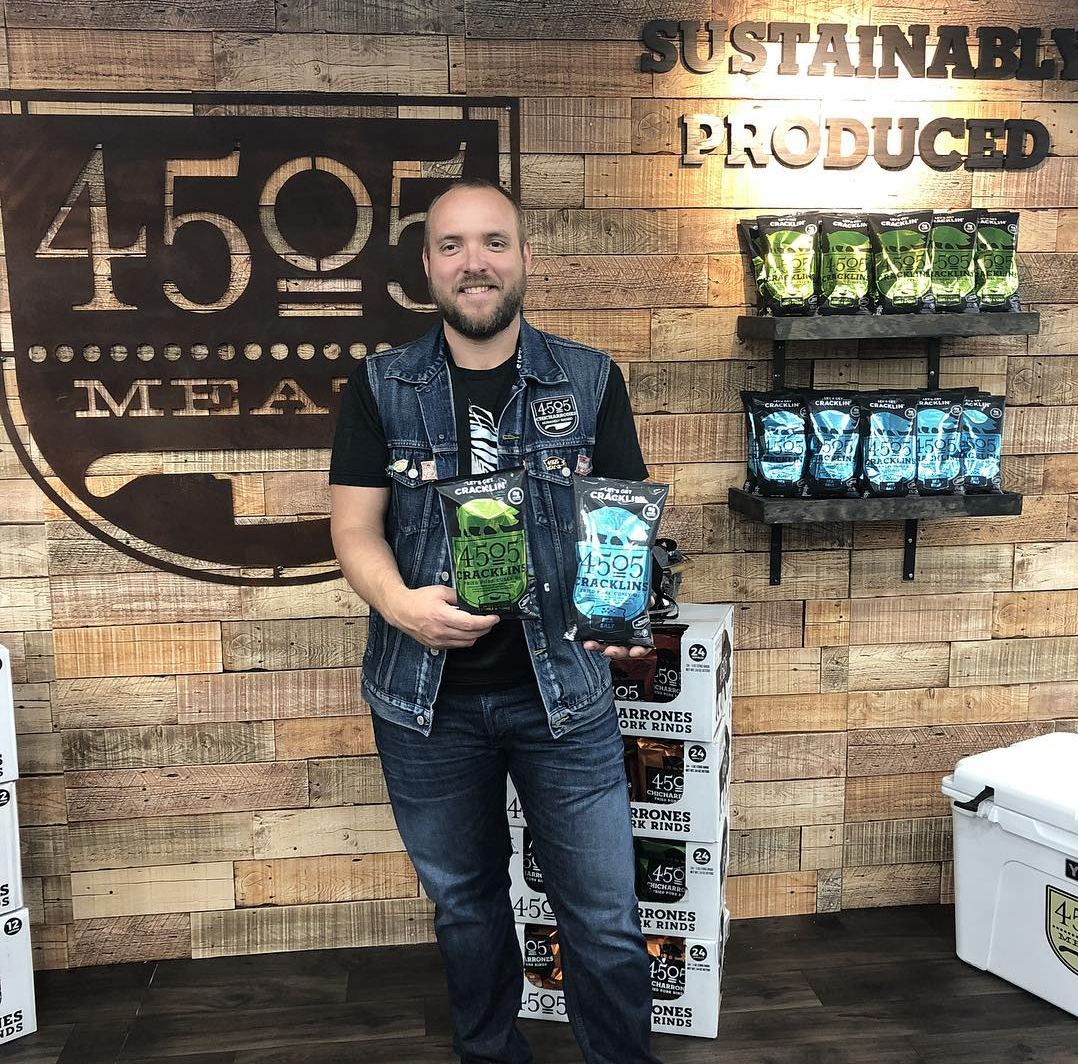 This Sunday February 7th is one of the my favorite holidays – Super Bowl Sunday! It’s also another holiday which I love – National Pork Rind Appreciation Day! This day always takes place the same day as the Super Bowl. The sharing of the day is likely for a number of reasons. While today all pro and collegiate footballs are made from cowhide leather, they were once derived from pigs. And the football is often still called the “pig skin”. Plus a carnivorous food like pork rinds fits well with the toughness of the game of football.

Pork rinds have a number of health benefits. The rinds are a great source of glycine, an essential amino acid which many don’t get enough of in their diet. Glycine is important for your skin, joints as well as for stabilizing your blood and helping you sleep.

Another advantage of pork skins are they’re carbohydrate free. As we snack on lots of food while watching the Super Bowl, pork rinds make a great substitution for carb heavy snacks such as potato chips, tortilla chips, and crackers. With more people turning to paleo and ketogenic diets, there’s been a rise on the market for pork rinds.

Like any product, it’s important to choose pork rinds which are sustainably sourced. Many pork skin products out there like to market that they’re paleo or keto, yet they used factory farmed pigs or add chemicals to their product. Some are even cooked in omega-6 oils instead of lard. While a lot is still misunderstood about the wonderful fat called lard, I’d think somebody who likes to eat pig skins wouldn’t have an issue of them being cooked in the fat from pigs.

Fortunately, there are a number of pork rind brands whose owners source from humanely raised pigs and are free of unnatural and chemical ingredients. 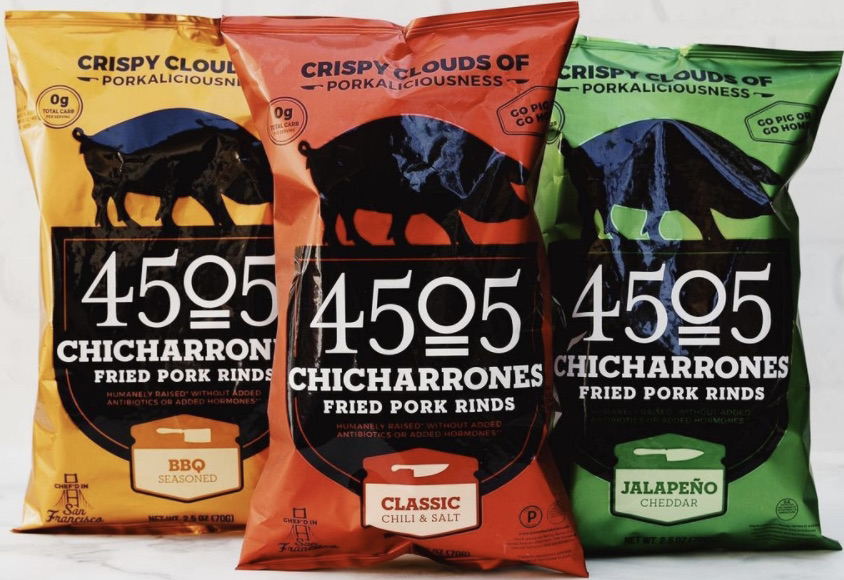 4505 Meats was originally a whole animal meat company in San Francisco, founded in 2009 by chef and butcher Ryan Farr. Since the beginning, Ryan was frying pig skins at home to make extra money selling them at farmers markets and to local bars. The rinds soon become a legend in the city as people passionately dubbed them “crispy clouds of porkaliciousness”. Now 4505 has a wide variety of pork rinds. The varieties include multiple flavors of their Chicharrones made from skin of the pig’s back and bellies and their Cracklins made from skin of the pig’s shoulder with the fat still attached. 4505 Meats also a product called Crumbles, which are breadcrumbs made from pork skins, and a snack mix of their Chicharrones, Cracklins, and Whisps Cheese Crisps. Additionally, Ryan runs the restaurant 4505 Burgers & BBQ, where he partners with ranchers who raise their livestock humanely. Ryan has authored the books Sausage Making and Whole Beast Butchery.

Brett Goodson created Bacon’s Heir as he was determined to change people’s perception about the pork rind. Having grown up in the coastal plains of Alabama working on a grass fed cattle and honey farm, he knew the benefits of properly raised animals. He perfected his recipe for porks – or the Pork Cloud as he refers to them – while working as an engineer for hybrid vehicle batteries. After successfully introducing the Pork Cloud at a dinner party with his friends, Bacon’s Heir was launched. Brett calls them the Pork Cloud as they’re light and fluffy and remind him of clouds on a summer afternoon. The flavors of his Pork Clouds are rosemary & sea salt, habanero, garlic thyme, and Malabar black pepper. Bacon’s Heir’s other product is pork skin based breadcrumbs. 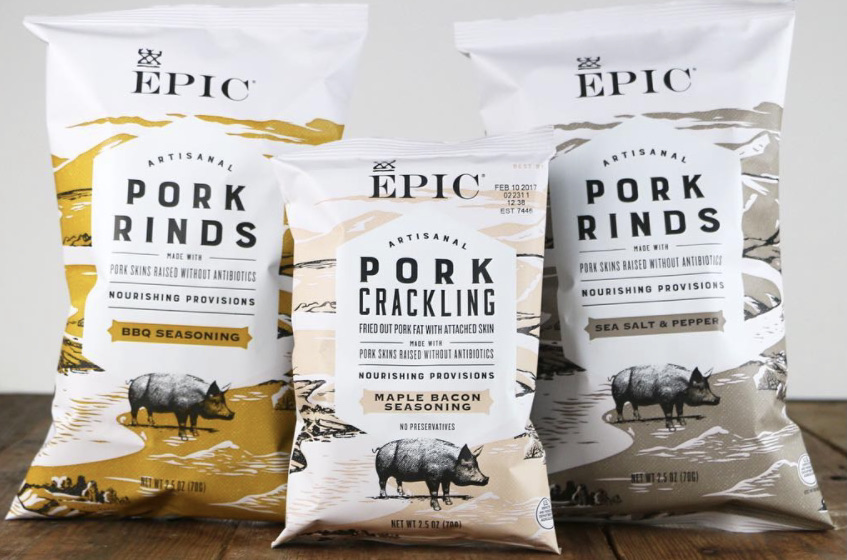 When EPIC Provisions first began, its founders Katie Forrest and Taylor Collins were vegetarians. They were experiencing gastrointestinal and inflammatory health issues due to the high fat, low carbs, soy, and other highly processed proteins. They then went vegan, only making matters worse. And being raw foodists didn’t improve anything. They finally began looking at the foods eaten by our ancestors and following what’s now known as the paleo diet, focusing on animal fats, grass fed protein, and leafy vegetables. Within a few months, they were stronger, faster, and leaner than they had ever been before. It was easy for them to cook healthy meals at home, but they couldn’t find any pre-packaged nutrient dense animal products in the supermarkets. They needed these for when they traveled, exercised, or worked. Their plan was to create the 100% grass fed meat, fruit, and nut bar. Katie and Taylor called their product EPIC, because the bars were about animals being pasture raised in humane conditions, regenerating our bodies, and healing the land. The EPIC line began expanding into many other products, including traditional jerkys made of beef, pork, and chicken. Among the pork offerings are pork rinds in multiples flavors in their different varieties of fried pork rinds, oven baked pork rinds, and pork cracklings. 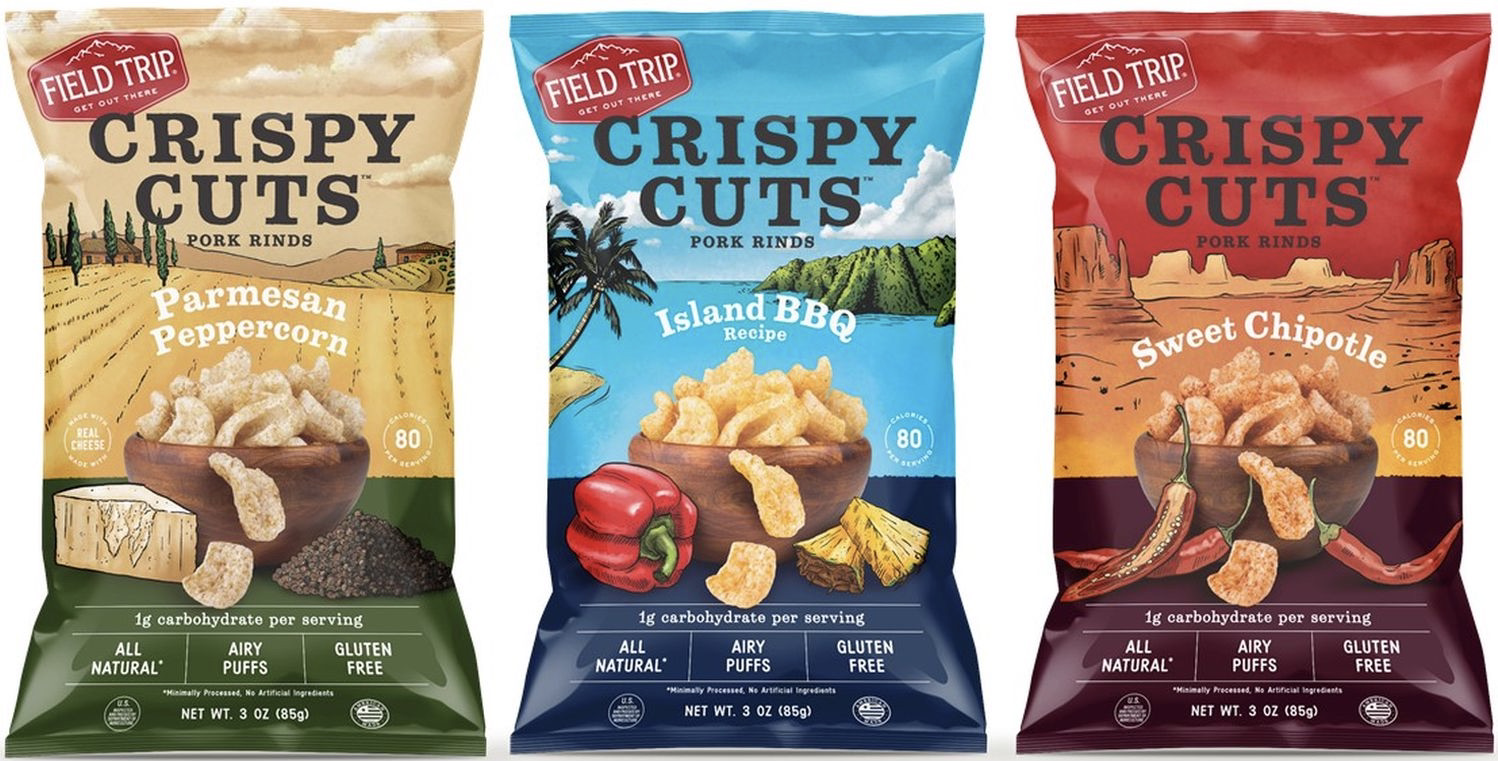 In 2010, three friends in a New York City apartment agreed they needed to change the meat snack world after tasting craft jerky on a ski trip in Vermont. This led to them forming Field Trip. Founders Tom Donigan, Matt Levey, and Scott Fiesinger all felt it was important not only to come up with protein-rich snacks which are healthy, but also ones which were high quality and tasted great. After starting with jerky, Field Trip expanded into other types of meat snacks. This includes their pork rinds in the flavors of parmesan peppercorn, island BBQ, and sweet chipotle.

U.S. Wellness Meats is one of the most successful online retailers in sustainable food. The business began in 2000 with working family farms in northeast Missouri and Illinois who been raising animals on the land for generations. Since then, they’ve partnered with a few other small family farms across the U.S. and their friends’ farm in Tasmania. All of the pork U.S. Wellness sources is heritage breed from farms where the pigs forage in open pastures while being given a non-GMO feed as supplementation. No antibiotics or added hormones are ever administered to their swine. The flavors of pork rinds U.S. Wellness produces are original, salt & pepper, and BBQ spice. Pork rinds are among their large varieties of beef, lamb, bison, pork, seafood, poultry, dairy, and even non-meat products such as nuts and chocolate. U.S. Wellness’ main model is the Internet, but they also have a select number of physical retailers across the U.S. which carry some of their products.