For me, hot dogs are one of the first types of meat I remember eating as a child. But like all foods, I now want to consume properly sourced franks. These are one of the hardest foods to find more natural versions of as they’re a rather processed product in general. When searching for better choices in hot dogs, it’s important to pick ones with just the basic ingredients needed.

As the Appropriate Omnivore, the first thing I look for in a frankfurter is that they’re 100% grass fed. It’s also best to go for hot dogs which are nitrate and nitrite free (also known as uncured) as well as not containing any MSG, high fructose corn syrup, preservatives, artificial flavors, or artificial color. All of the hot dogs listed below fit these criteria.

We’re seeing more and more 100% grass fed beef brands pop up in supermarkets. Many of them include hot dogs among their many products. In alphabetical order, here are 12 options for grass fed and grass finished hot dogs:

Although Applegate‘s 100% grass fed hot dog wasn’t introduced until 2006, its mission was the same as mine in writing this article. In 1987, Stephen McDonnell and his friend Christopher Ely bought Chris’ family business Jugtown Smokehouse, which produced smoked meats without any synthetic nitrates. Stephen started the business with the purpose of asking “what if you weren’t afraid to read a hot dog ingredient label?” Next they made deli meat which was antibiotic free, followed by introducing the first widely distributed deli meat with an organic certification. In 2015, all of their beef products became 100% grass fed. In 2017, their hot dogs became verified by The Non-GMO Project. Applegate also has corn dogs, breakfast and dinner sausages, cheeses, bacon, breaded chicken, grilled chicken strips, and burgers patties. They recently launched a label called The New Food Collective, which makes sausages from ranchers who farm regeneratively. 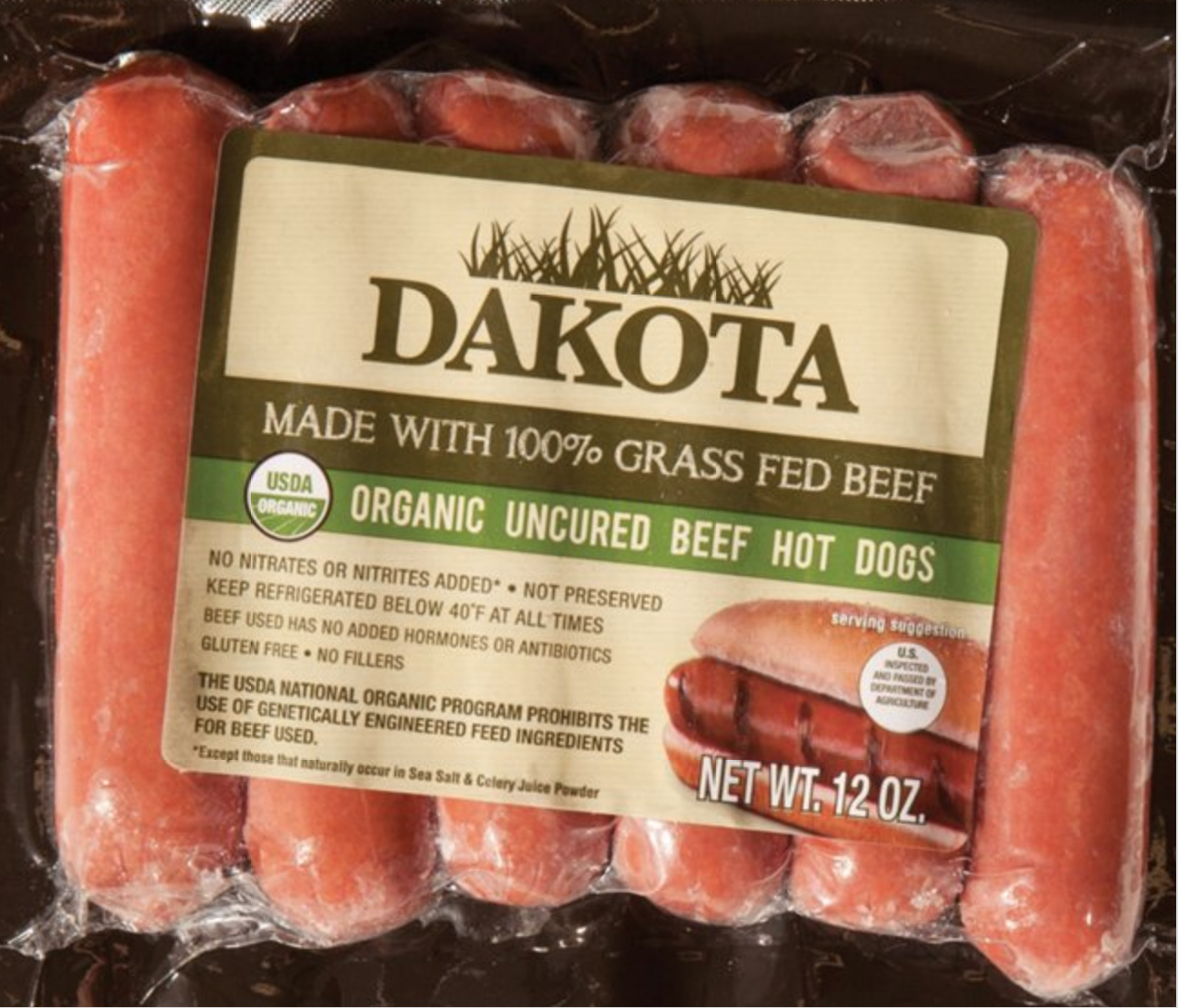 Dakota 100% Grass Fed sources its beef from producers, ranchers, and farmers in the United States, Uruguay, and Australia. All of their partners must be committed to allowing their cattle to graze on nutrient rich grass, produce organic beef, provide records of traceability, and make the processing of the meat as humane as possible. In addition to hot dogs, ground beef, frozen patties, roast cuts, and steak cuts can all be found from Dakota in supermarkets. 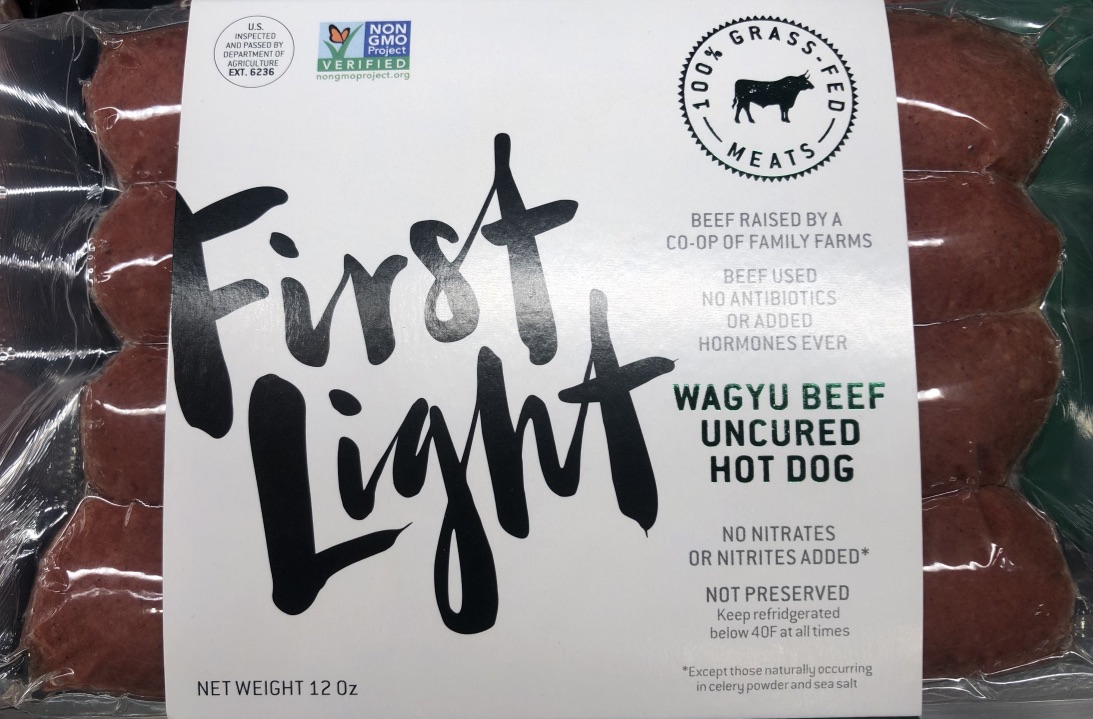 Wagyu beef is known for being well marbled, having great texture, and tasting flavorful, but not a lot of it is 100% grass fed. The First Light Wagyu Producers Group, a collective of 61 farmers in New Zealand, took up the challenge of raising Wagyu cattle on grass and out of their pens. Their hot dogs are among other products they sell, including ground beef and various cuts of steak. 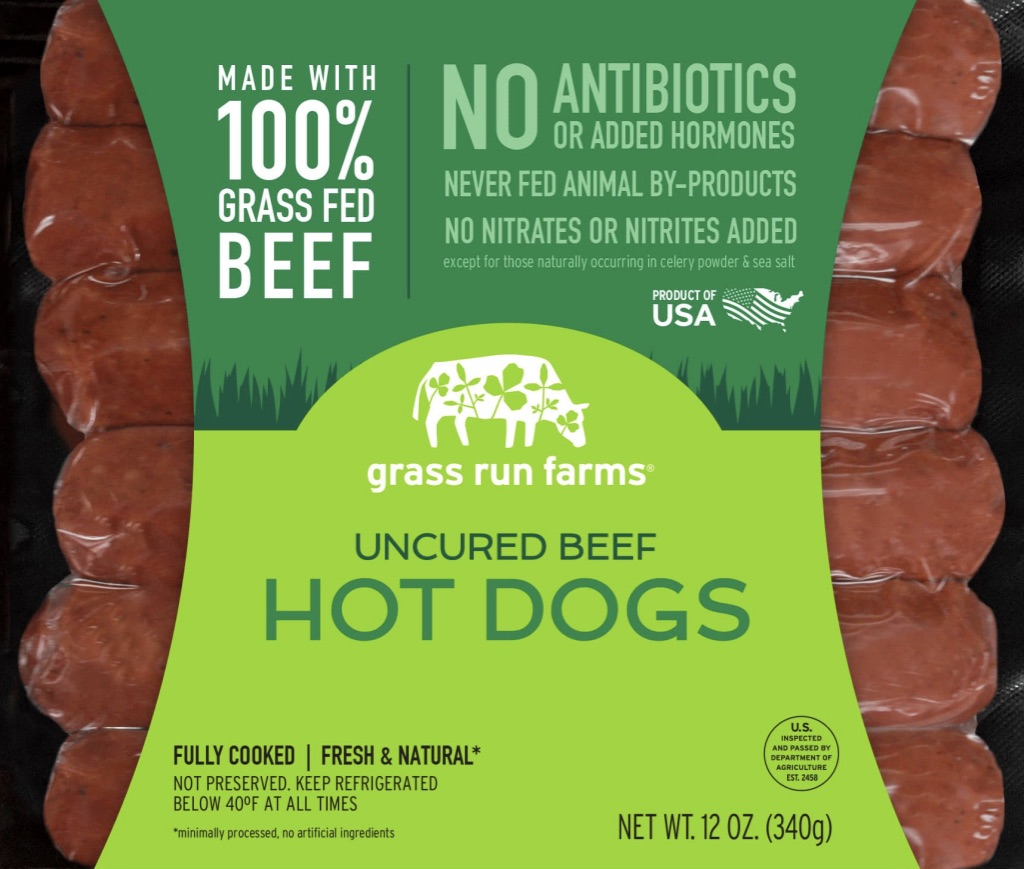 Grass Run Farms is another collaboration of family farms. They use affidavits to trace the animals back to the grasses and farms they were raised on. Grass Run Farms believes in raising cows on grass for the health benefits, the environmental advantages of maintaining healthy soil and sequestering carbon, and the way the agricultural method treats livestock humanely. They produce hot dogs along with other types of sausages plus steaks, roasts, and fresh and frozen ground beef. 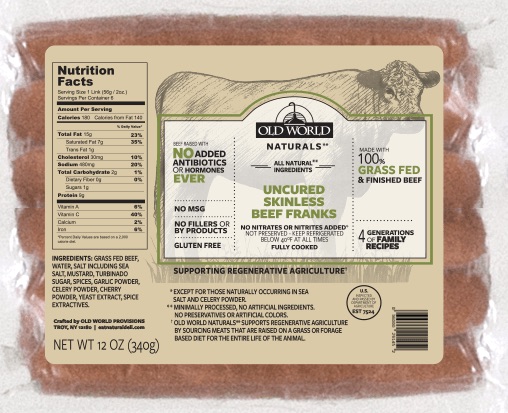 Old World Naturals is a collection launched by a fourth generation family in the deli meat business. Old World is proud to now be sourcing its meats  from sustainable farms. They’re currently looking at new ways to support sustainability and regenerative agriculture on a larger scale. In terms of their current practices, their hot dogs use 100% grass fed beef as does their roast beef, corned beef, and pastrami. Old World Naturals also makes cold cuts with antibiotic free turkey and nitrate free ham.

In 1988, seven Wisconsin farmers in the Coulee region were fed up with industrial chemical farming taking over the American agriculture system. They created a cooperative of family farms known as CROPP (Coulee Region Organic Produce Pool). The coop later became Organic Valley, specializing in organic dairy. In 1996, they moved into the meat industry, creating a label which would eventually be called Organic Prairie. They were the first in the industry to ban animal by-products from a cow’s diet. They also were instrumental in forming the standards for organic meat certification. They launched their hot dogs in 2013. Other recent developments by the coop include the Mighty Organic brand, which has 100% grass fed beef jerky and bars and 100% grass fed milk. Today, they’re a cooperative of over 2,000 farms in 34 states plus Canada and Australia. 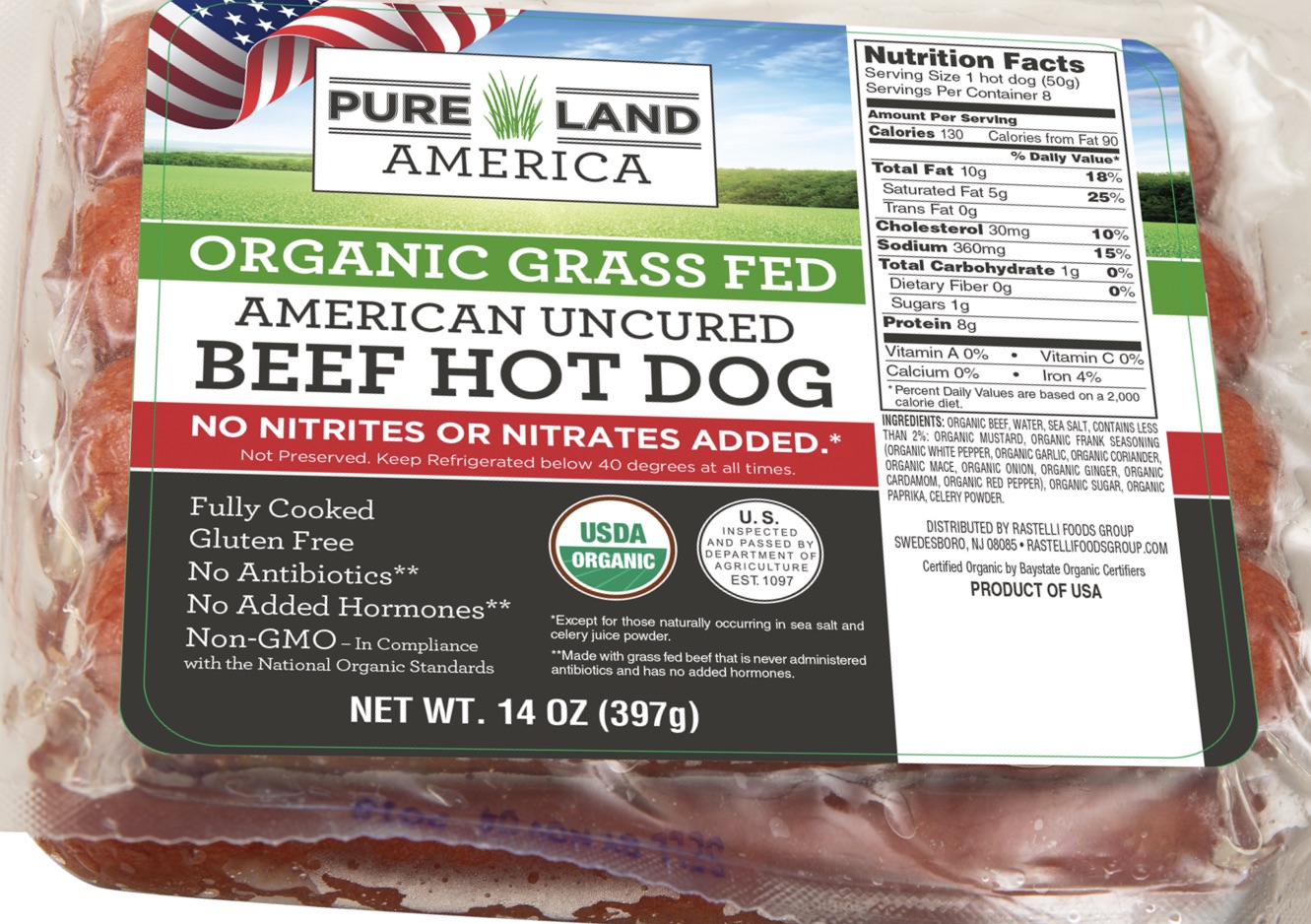 PureLand America is a U.S. company which partners with the top organic 100% grass fed beef farmers throughout the midwest practicing holistic management methods for both cattle and the environment. Their beef is reviewed by a Certified Quality Control Specialist to guarantee that all of their products meet the high standards for trim, marbling, and aging. In addition to hot dogs, PureLand has products such as steaks, ground beef, frozen burger patties, and meatballs. 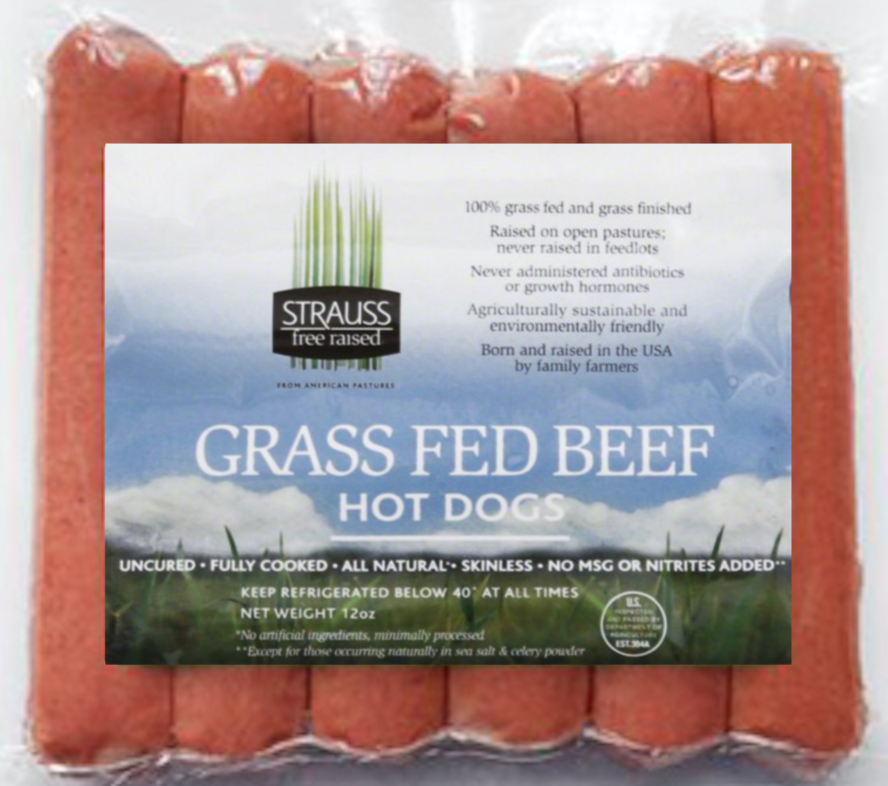 Strauss started in 1937 as Strauss Brothers Packing, which provided high quality farm fresh meats to people in the Milwaukee neighborhood. About two decades later, it became an internationally known brand. Today, the company is run by Randy and Tim Strauss, who have evolved Strauss into partnering with family farms producing meat which is sustainable and humanely raised. They sell in supermarkets and have an online store where their hot dogs along with their cuts of grass fed beef and lamb can be ordered and delivered to your home.

The Byrne’s and Donati’s were two families who had been ranching in the Sacramento Valley for over 100 years. Matt Byrne and Chris Donati joined together to create Sun Fed Ranch. Sun Fed partners with other family farms which raise cattle in open spaces and adapt to natural weather cycles to sustain the land and grow 100% grass fed and finished beef 365 days a year. Along with hot dogs, Sun Fed has a large line of grass fed beef products, including other types of sausages, many cuts of steaks and roasts, bone broths, deli meats, frozen patties, and prepared meals.

Beginning out as an experiment in environmental conservation, Teton Waters Ranch discovered how they can replenish the abused soil of an old potato farm by the means of planting native grasses, cattle rotation, and the livestock fertilizing where they eat. These practices led to a system of food which is both sustainable and healthy. They ended up forming a company which produced hot dogs and sausages made from grass fed and finished beef. They’ve since partnered with the Savory Institute, a worldwide nonprofit with the goal of restoring grasslands using holistic management. Teton Water has also recently expanded their line to include burger blends, giving us a healthy and balance mix of meats and vegetables.

Matt Meier worked for 20 years in conventional food marketing before he returned home to the farm he grew up on. In 2003, he founded Thousand Hills with the mission of nourishing the soil, the plants, cattle, and people by holistically grazing cattle for their entire lives. His home farm in Clearwater, MN is one of the 13 Savory Institute hubs in North America as the ranch is a leader in holistic and regenerative grazing practices. Thousand Hills now sources cattle from other family farms which they’ve hand picked for their similar deep commitment to regenerate land and having nutrient rich beef as a result. The farms range from the midwest, northeast, and west regions of the United States. Already 600,000 acres of land has seen positive benefits. Hot dogs are part of a diverse amount of products which can be found from Thousand Hills, such as bone broth, chili, ground beef, sausages, steaks, roasts, jerky, and sticks. 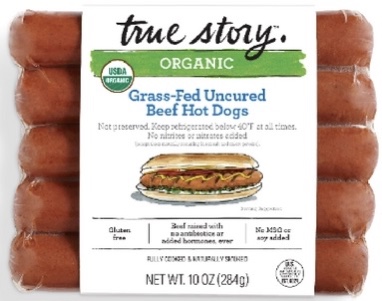 The people running True Story are third-generation food producers who have visited farms throughout America and Europe. Their methods for making their products go back to the way their fathers and grandfathers did things. True Story says their mission extends way beyond putting food on people’s plates by running a business which supports farmers, producers, and growers so we have a sustainable world for the future generations. Their hot dogs are part of their line of cleaner deli meats, which consist of many different types of sausages and deli meats.

U.S. Wellness is one of the most successful online retailers in sustainable food. The business began in 2000 with working family farms in northeast Missouri and Illinois who been raising animals on the land for generations. Since then, they’ve partnered with a few other small family farms across the U.S. and their friends’ farm in Tasmania to provide all of their 100% grass fed and finished beef. U.S. Wellness gives their cattle a 30 – 45 day resting period between grazing to make the plants in the pasture more dense and grow back new native plants. Hot dogs are among their large varieties of beef, lamb, bison, pork, seafood, poultry, dairy, and even non-meat products such as nuts and chocolate. U.S. Wellness’ main model is the Internet, but they also have a select number of physical retailers across the U.S. which carry some of their products. 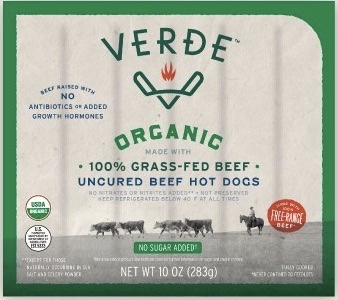 Verde‘s origins come from the green pastures of South America. Their methods of raising animals on open grasslands come from the centuries old gaucho traditions of respecting the animals, honoring the land, and valuing family, simplicity, and integrity. Today, Verde’s meat comes from a network of family farmers in Uruguay, Australia, and North America which are able to meet their high standards of proper animal practices. Hot dogs are a recent entry to their products of steaks, marinated beef, ground beef, patties, roasts, and stir-fries.

Northern California sixth generation cattle rancher Darrell Wood felt he wasn’t being rewarded or recognized for raising cattle entirely on grass and never giving them hormones or antibiotics. After discovering that consumers in San Francisco appreciated what he did, Wood formed Western Grasslands with two of his friends. Today, Western Grassfed Beef has over 1 million acres of USDA certified organic grasslands spanning the nine states of California, Oregon, Wyoming, Montana, Idaho, South Dakota, New Mexico, Nebraska, and Colorado. In addition to raising cattle naturally, Wood has established land conservation trusts throughout the U.S. guaranteeing that the land will be used for grazing and not torn down for real estate development. Hot dogs are one of the items which Western Grassfed sells along with steaks, roasts, meatballs, beef sticks, and bone broth. They can be found under the Panorama Meats label at many Whole Foods Markets. 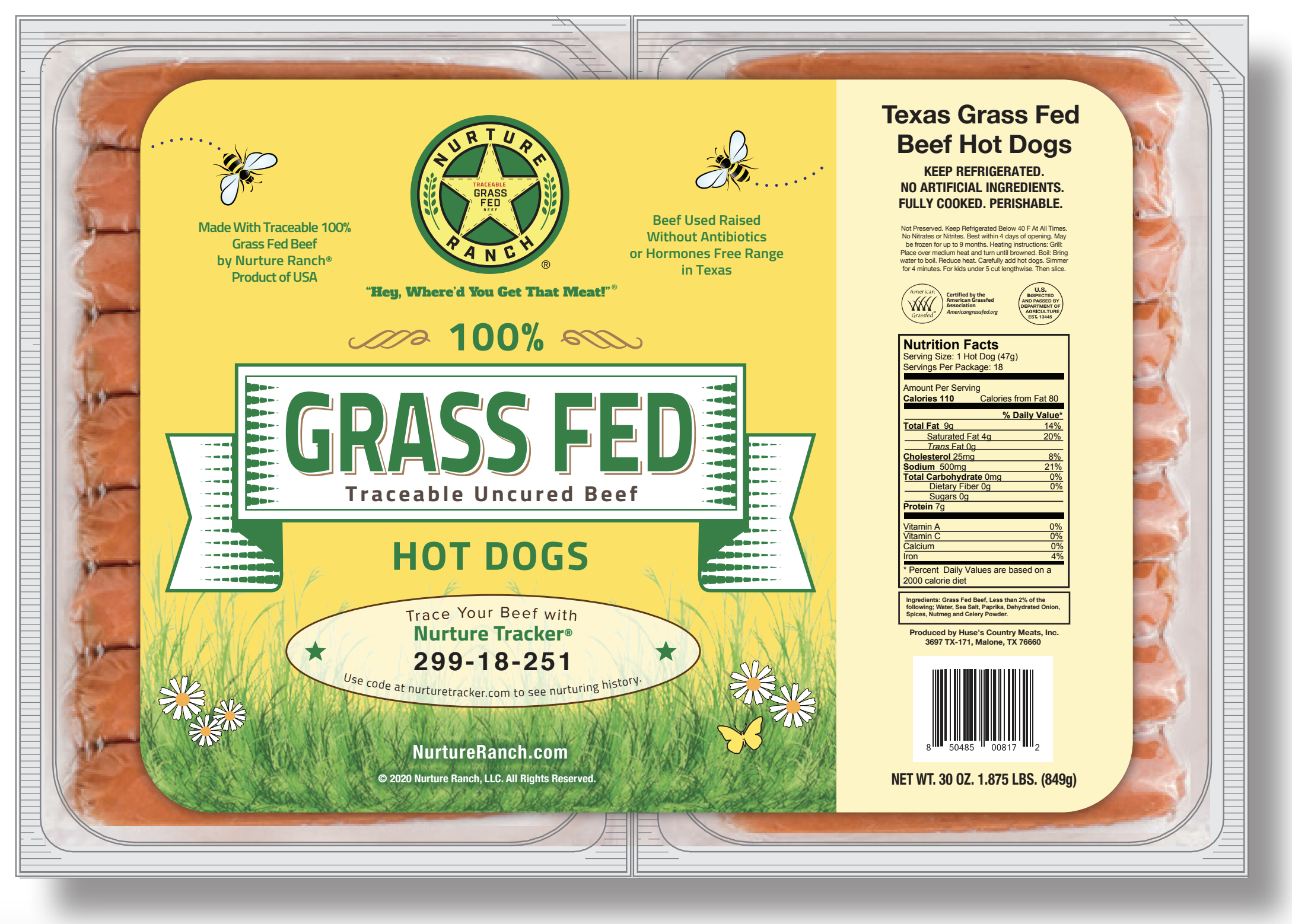 Nurture Ranch set out on a mission to improve beef with the utmost transparency. They started doing so by putting up a tracking number on their packages. The number can then be entered on their website, letting the consumer know everywhere the cow went from birth to harvest. Every pack of Nurture Ranch meat comes from 1-Steer™. The cows are raised on grass year round in Texas. Independent lab tests have found their beef is 100% cleaner than industry standards. Nurture Ranch has been using these practices with all of their products from ground beef to steaks to organ meats to bones. Soon hot dogs will be available from them too.

To witness how their tracking numbers work, readers can enter the number on the package of hot dogs in the photo above into this site.