To foodies, especially burger lovers, May is known as National Hamburger Month. This is likely because it’s the time of the year when the days are longer and the weather is warm enough to start grilling outside. An option for grilling hamburgers has always been the frozen patty. It allows you to save time not having to thaw the ground beef out, divide it up, or season the meat. You can simply remove the patties from the freezer and cook them.

Now that grass fed beef is more available than it’s ever been in modern times, we even have the option of getting it in the form of frozen burger patties. From farmers and ranchers to sustainable prepared food producers and even some brands that previously made conventional frozen burgers, there are a number of choices now. And lately we’ve seen a trend of burgers blends mixing beef and vegetables together.

In 1987, Stephen McDonnell and his friend Christopher Ely bought Chris’ family business Jugtown Smokehouse, which produced smoked meats without any synthetic nitrates. Stephen started Applegate with the purpose of asking “what if you weren’t afraid to read a hot dog ingredient label?” Next they made deli meat which was antibiotic free, followed by introducing the first widely distributed deli meat with an organic certification. In 2015, all of their beef products became 100% grass fed. Their frozen patties are their most recent grass fed beef additions. Applegate has two different lines, both of which mix beef or turkey with veggies into the patties. The Great Organic Blend Burger has beef mixed with mushrooms. And the Well Carved Burger mixes beef with cauliflower, lentils, spinach, and butternut squash.

In the early 90s, Walter “Bubba” Eaves began Bubba Burger to fulfill his dream of creating a perfect and juicy burger which he’d be proud to serve his friends at home. Bubba invented a production method where he felt he could cook the patties after being frozen yet they still remained juicy and flavorful. He was always for choosing the highest meat in his burgers with only whole muscle meat chucks. He refused to use any fillers or trimmings. As Bubba has always prided himself in his patties containing high quality beef, he decided to go a step further in recent years and add burger patties consisting of 100% grass fed beef free of preservatives or added hormones.

Dakota 100% Grass Fed sources its beef from producers, ranchers, and farmers in the United States, Uruguay, and Australia. All of their partners must be committed to allowing their cattle to graze on nutrient rich grass, produce organic beef, provide records of traceability, and make the processing of the meat as humane as possible. In addition to frozen patties; ground beef, hot dogs, roast cuts, and steak cuts can all be found from Dakota in supermarkets. 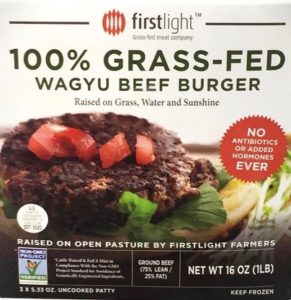 Wagyu beef is known for being well marbled, having great texture, and tasting flavorful, but not a lot of it is 100% grass fed. The First Light Wagyu Producers Group, a collective of 61 farmers in New Zealand, took up the challenge of raising Wagyu cattle on grass and out of their pens. Their frozen burger patties are among other products they sell, including various cuts of steak, ground beef, hot dogs, and meatballs.

The team behind Force of Nature spent six years studying regenerative agriculture and touring ranches around the world before deciding to start their own company. So Force of Nature was founded on the principle of being able to jumpstart a global regenerative supply network. Their main focus in terms of products is ground meat from all types of animals, including a number of wild game. They also sell various cuts of their different animals. And then there’s the Force of Nature frozen patties, which come in their varieties of bison and venison.

Grass Run Farms is a collaboration of family farms. They use affidavits to trace the animals back to the grasses and farms they were raised on. Grass Run Farms believes in raising cows on grass for the health benefits, the environmental advantages of maintaining healthy soil and sequestering carbon, and the way the agricultural method treats livestock humanely. They produce frozen ground beef patties along with fresh ground beef, steaks, roasts, hot dogs, and sausages.

PureLand America is a U.S. company which partners with the top organic 100% grass fed beef farmers throughout the midwest practicing holistic management methods for both cattle and the environment. Their beef is reviewed by a Certified Quality Control Specialist to guarantee that all of their products meet the high standards for trim, marbling, and aging. In addition to frozen patties, PureLand has products such as steaks, ground beef, hot dogs and meatballs.

The Byrne’s and Donati’s were two families who had been ranching in the Sacramento Valley for over 100 years. Matt Byrne and Chris Donati joined together to create Sun Fed Ranch. Sun Fed partners with other family farms which raise cattle in open spaces and adapt to natural weather cycles to sustain the land and grow 100% grass fed and finished beef 365 days a year. Along with frozen patties, Sun Fed has a large line of grass fed beef products, including many cuts of steaks and roasts, bone broths, deli meats, hot dogs, sausages, and prepared meals.

Beginning out as an experiment in environmental conservation, Teton Waters Ranch discovered how they can replenish the abused soil of an old potato farm by the means of planting native grasses, cattle rotation, and the livestock fertilizing where they eat. These practices led to a system of food which is both sustainable and healthy. They ended up forming a company which produced hot dogs and sausages made from grass fed and finished beef. They’ve since partnered with the Savory Institute, a worldwide nonprofit with the goal of restoring grasslands using holistic management. And most recently Teton Water expanded their line to include burger blends, giving us a healthy and balanced mix of meats and vegetables. Their burger blends are salt & cracked pepper, mushroom & onion, and a southwest style of mushrooms & poblanos peppers.

Tribali founder Angela Mavridis spent her childhood summers in Greece where she saw her grandmother cook everything from scratch with all organic, local, and heirloom ingredients. While at the time she didn’t know it was paleo or what the paleo diet was, it turns out paleo is a Greek word. As an adult, Angela had gone far off track from the nutrient dense Greek/paleo diet as she was often feeling bloated and tired. Then when modern medicine was unable to identify her health conditions, she decided to become a holistic nutritionist and take improving her health into her own hands. Realizing that protein powders, shakes, supplements, and bars weren’t helping, she returned to what she grew up eating in Greece. Angela had been a vegetarian for 35 years, but then discovered pairing clean animal meats with ancestral veggies helped her feel better both physically and emotionally. Shortly after, her digestive issues decreased and she began healing. Angela now runs Tribali Foods which makes patties from a variety of humanely raising animals, including cattle which are 100% grass fed. The beef patties come in they style of Mediterranean and umami. Also, a portion of Tribali’s proceeds go to benefit the Farm-to-Consumer Legal Defense Fund.